Open Letter to the Editorial Board of Revolutionary History

Dear Comrades,
We are writing to you to draw your attention to something that has been done in your name, and to ask you to please rectify it in the broader interests of workers democracy, which I am sure the members of the Editorial Board would hope to at least be seen to be in favour of.
Our comrade Gerry Downing, who most of you undoubtedly know and who has been politically active continually as a Trotskyist since the mid-1970s, was recently removed from the Facebook group of Revolutionary History, and not only that, but BLOCKED from even seeing it, by its de-facto admin, Mike Pearn.
Gerry had mistakenly posted to the group, along with other groups, an article by himself, published by Socialist Fight, about the European Union and opposition to Brexit. Obviously this was a mistake as the remit of the group is that it deals with historical, not current, political questions as does the journal itself.
But the remedy for that should simply have been to remove the post, and point out that the group does not accept postings purely about current matters.
Instead Pearn removed Gerry from the group and then blocked him. What makes this so bizarre is that the Facebook group is a public group. Anyone who is on Facebook can see it. Evidently this is by design, it is intended to be available to the general public, irrespective of their views. So even outright fascists can see it, and it is a public group so what is wrong with that?
But apparently Gerry Downing is to be blocked and its not allowed to read it therefore. That’s what blocking means, even for public groups. How bizarre! Is he also to be banned from going into a bookshop and buying a copy of Revolutionary History? If that were possible for him to enforce, then the logic of Mike Pearn’s action is that this should happen also.
Mike Pearn’s echoing of slanders against Socialist Fight as ‘anti-Semitic’ in his justification does not make sense even in its own terms, and is obviously not the real reason for blocking Gerry. If Revolutionary History wanted to prevent ‘anti-Semites’, real and alleged, from reading the material published in the group, then the group would be private.
But of course this is rampant nonsense, Pearn’s real motive is his own third-campist anti-Trotskyist politics. Those politics drive him to support the Ukrainian Solidarity Campaign, over which Gerry has strongly disagreed with him in the past. which supports the Maidan movement and government that involves outright Hitler-loving pro-NATO US (and Israeli)-funded Ukrainian Nazis, who massacred over 40 leftist workers in a trade union building in Odessa in May 2014.
Being accused of anti-Semitism by someone who is in a bloc with outright Nazis is something of a joke. But we do accept that Revolutionary History, for reasons of researching the history of Marxism and the Trotskyist movement, does involve input from people around the Shactmanite movement and related trends who both in historical and current politics, act in a counterrevolutionary manner: Pearn and Chris Ford’s politics are thus consistent with those of Hal Draper who blatantly applauded the ethnic cleansing of Palestine in 1948, and which arc towards the politics of Max Shachtman with his support for the Vietnam War and the Bay of Pigs invasion of Cuba in 1961. We are not opposed to collaboration of Trotskyists with such people on historical, archive projects, but we are not going to be dictated to by such reactionaries and renegades when they bring their own ‘current politics’ into a historical journal.
And this is it. Pearn’s libelous attack on us is current politics. So in raising it while at the same time going on about Gerry’s mistaken posting of an article on Brexit, he is the most incredible hypocrite. But we will not sit back and tolerate being libeled by someone in the name of Revolutionary History. We do not generally seek recourse to law in left-wing disputes but we are not purists who totally rule this out in principle either if extremely reprehensible conduct is involved, as you will see from our response to the threatened expulsion of Gerry Downing from the Labour Representation Committee, when no less a person than Gordon Nardell, the Labour Party’s current legal head and QC, concluded that they had no legally defensible grounds to expel Gerry for so-called ‘anti-Semitism’.
We attach screenshots of Pearn’s post and some comments below it when others tried to justify his behavior, just in case anything untoward should happen to them at his hands. We would like this decision rescinded and for Revolutionary History to make clear that it does not endorse Pearn’s behavior. We note the comments of Barry Buitekant, the Business Manager of Revolutionary History, justifying Pearn’s blocking of Gerry and also note that flows from his right-wing, non-Trotskyist politics, similar to that of Dave Osler, Andrew Coates and indeed Jon Lansman, who tried and failed to have Gerry Downing expelled from the LRC.

We trust that the RH Ed Board does not endorse, and will repudiate, the attack on working class democracy involved in our publications being excluded from Houseman’s, which is a threat to all socialist publications in the future. This was shown by the recent incident when Zionists attacked the SWP’s Bookmarks shop and, in order to justify their thuggery, which involved throwing books around and shouting that the shop should be burned, they also held up a copy of Abram Leon’s famous book “The Jewish Question: A Marxist Interpretation” as self-justification, claiming that the left was ‘anti-Semitic’.

In that regard, with reference to the smear of ‘anti-Semitism’ against us that was begun by the third-campist CPGB/Weekly Worker, or rather its leader Jack Conrad, we attach our new pamphlet on the politics and legacy of Abram Leon, and challenge Revolutionary History, or any serious would-be Marxists on its Ed Board, to review it and demonstrate (if they are so inclined) that our positions on the Jewish Question are in any way at odds with the method and politics of Abram Leon, and other classical Marxists such as Trotsky, Marx and Lenin, on which both Leon and ourselves base(d) our programme and analysis. We are confident that they will not be able to do so, but let’s see.
Regarding Pearn’s point about Gerry having ‘changed the header’ on the group, it appears that something unexpected happened with Facebook when he went to the group’s page. He was prompted to ask if he wanted to add a header as the group did not have one. This is not possible for ordinary members of a FB group, and the only explanation that makes sense is that Pearn must have somehow erred and given him the admin rights to do that. Pearn is the active administrator of the group; the only other admin being Paul Flewers who did not even know about this when I asked him, so it must have been Pearn. Or some weird malfunction of Facebook itself, but that seems very unlikely. Asked to provide a header, Gerry did so, from his numerous stock images. The one he provided is below, and is perfectly appropriate for Revolutionary History, as a history journal that deals primarily with Trotskyism, which was the vision of its founding editor, Al Richardson. 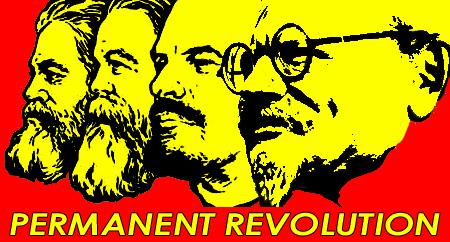 I have to say regarding the bureaucratic hackery involved in Pearn’s exclusion of Gerry from the Facebook group, what is truly foul is his statement that Gerry “has no connection and will never have a connection” with Revolutionary History. Flatly untrue, as he has attended AGM’s of Revolutionary History in the past, when it held regular AGM’s for subscribers, which it no longer does. This re-writing of history and attempt to write people out of the workers movement altogether is reminiscent of the worst aspects of Stalinism.

Pearn will have an even harder time saying that about me, as I was a member of the Revolutionary History Ed Board in the early 2000s and the only reason I resigned was to devote more time to current political activities. I was also the person who got the original Revolutionary History website onto an even keel and proper domain, put up much back issue material working with Ted Crawford, and who set up its first PayPal account. My involvement is still visible on the mirror site for the (now defunct) RH website on the Marxist Internet Archive. In addition Al Richardson was a friend of mine and I wrote his obituary in the Weekly Worker of 27 November 2003.

We hope you will do something to restore basic Marxist principle to the functioning of your Facebook group/page and repudiate this action of comrade Pearn. And we hope you will see fit to respond politically, as Marxists, to our material on Abram Leon, in the spirit that I believe Al Richardson would have done.