We trust you have seen the Channel 4 documentary Massacre at Ballymurphy. This brutally exposed the hidden history of British military repression against civilians in the north of Ireland. It brings into focus the role of General Sir Frank Edward Kitson, and General Sir Michael David Jackson. We believe the material revealed in this documentary adds to the accumulated evidence against these two and this warrants the Irish government bringing charges of war crimes against them in the International Court of Justice in The Hague.

General Frank Kitson with the Queen, 16 May 1983: War Criminal

London School of Economics Professor James Hughes in History Ireland, Jan/Feb 2004, tells us that Kitson received the Military Cross (MC) on 1 January 1955 for service in the Mau Mau Uprising in Kenya, and was awarded a Bar to it on 23 May 1958, for service in the Malayan Emergency the previous year.

In 2012 the British High Court found British troops guilty of the Batang Kali massacre in Malaya in 1948, killing 24 defenceless civilians. In May 2012 the High Court decided not to hold a public hearing into the killing but also ruled that Britain was responsible. The court proclaimed, “There is evidence that supports a deliberate execution at Batang Kali.” When the case went to the United Kingdom Supreme Court in November 2015 it ruled that the government did not have to hold a public inquiry even though it may have been a war crime, because the atrocity occurred too long ago. Kitson’s citation for his actions in Malaya was, “For exceptional skill and leadership as a Company Commander during jungle operations. By his devotion to duty he attained the virtual elimination of two communist party branches in a difficult area.”

Frank Kitson was central to these operations and the state acknowledged this with a Bar to his Military Cross. 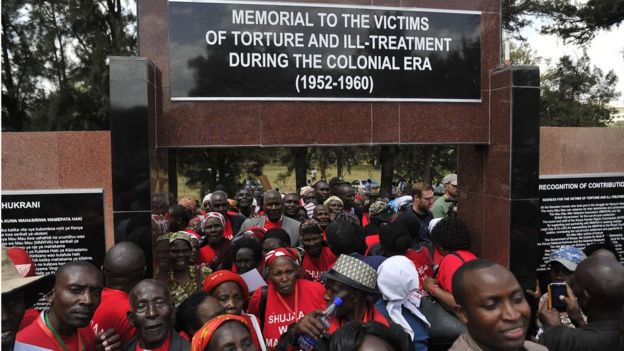 In 2013 William Hague, then Britain’s foreign secretary, apologised and accepted that its security forces had tortured, mutilated and raped Mau Mau fighters. He agreed to compensate up to 8,000 victims and to build a memorial to them in Nairobi. The monument is part of a 2013 out-of-court settlement by the UK government when it agreed to pay £20m in compensation to Mau Mau veterans. Tens of thousands of Kenyans were held in detention camps during the Mau Mau campaign. Many suffered abuses including beatings, rape and castration. The Kenya Human Rights Commission says 90,000 Kenyans were executed, tortured or maimed, and 160,000 people were detained in appalling conditions, according to the BBC report of 12 September 2015.

Kitson got his Military Cross for this.

Professor Hughes then points out that the Saville Report (2010) into Bloody Sunday and the de Silva Report (2013) on collusion with loyalist paramilitaries (into the murder of solicitor Pat Finucane, etc) “led to two further ‘unconditional’ British apologies for the behaviour of its security forces in Northern Ireland.

In November 2013, a BBC ‘Panorama’ investigation into British counterinsurgency in Northern Ireland in the early 1970s revealed that members of a special covert operations unit known as the Military Reaction Force (MRF) admitted to the murder of suspects and unarmed Catholic civilians. These admissions by the state or its agents confirm previous claims by critics dating back many decades. Such abuses were not merely low-level tactical excesses by undisciplined and racist troops but were institutional, systematic, and approved or covered up at the highest levels.”

Again, Kitson was central to these affairs.

“Proceedings have been issued against the Ministry of Defence and General Sir Frank Kitson.  A former senior Army officer is to be sued over the death of a Catholic man in Northern Ireland. Mary, the widow of Eugene “Paddy” Heenan, 47 who murdered by the UDA in 1973 when travelling to work in a minivan, is suing the Ministry of Defence and Kitson because she claims Paddy died because of negligence and misfeasance in office.”

Kitson, the British army’s acknowledged expert on counterinsurgency, was sent to Belfast as a brigade commander from September 1970 to April 1972. He was responsible for Belfast and surrounding districts.

Kitson has now been named as a co-defendant in the legal action by Mary Heenan on the grounds that he and others had “used agents knowing, or that they should have known that they would take part in criminal actions”.

Her solicitor, the well-known Kevin Winters of KRW Law, said:

“Given that those agents were embedded with paramilitary groups and the nature of Northern Ireland at the time, it was reasonably foreseeable that activity could include murder. Frank Kitson was therefore negligent in creating the policy and the ministry of defence were negligent when allowing its implementation. The policy created the expectation that people working for the state would commit murder,”

He claimed in the legal papers that “Kitson is liable personally for negligence and misfeasance in public office”, and that he had been “reckless as to whether state agents would be involved in murder”. As late as 2003 a story in the Observer/Guardian confirmed this practice was ongoing:

“The most senior British Army intelligence officer in Northern Ireland in the mid-1990s invited the feared Loyalist killer Johnny ‘Mad Dog’ Adair to dinner and oversaw the leaking of military secrets about Republican suspects. Adair’s fingerprints have been found on at least a dozen military intelligence dossiers uncovered during investigations by the Stevens Enquiry team into collusion between loyalists and the security services. The Observer knows the identity of the officer concerned, but he cannot be named for legal reasons.” (The Observer Henry McDonald and Martin Bright 27-4-2003).

General Sir Michael Jackson, who was an adjutant in 1 Para in the early 1970s, described Kitson as an ‘incisive thinker and military theorist’, and claimed that ‘he was the sun around which the planets revolved . . . and very much set the tone for the operational style’ in Belfast. He is the acknowledged expert on counter-insurgency in the British Army still, his Low Intensity Operations is a text book for the British Army.

Jackson, later to become head of the British Army, was operating as press officer in Ballymurphy during the massacre in August 1971.  He fed the press a complete falsified account of a non-existent ferocious gun battle between the provisional IRA and the paratroopers. The local Unionist press took up the story. The tale was followed by a perfunctory inquest that simply recorded the cause of death of the victims.

These were accompanied by statements by the soldiers of coming under a barrage of fire and firing in self-defence. One soldier spoke of a middle-aged grandmother moving about a field and attacking him with a machine gun. In fact, there was no evidence of a gun battle. No weapons, no rounds, not even empty shell cases were recovered from this battle. The army may well have expected that the IRA would return fire, but the IRA knew about the internment raids were in safe houses.

The same 1st Battalion, Parachute Regiment with the same soldiers and commander, using the same methods, and with the same stories of imaginary gun battles, carried out the slaughter of the Derry civil rights march only months later, on 31 January 1972. Again, a large amount of British whitewash absolved the troops in the form of the Widgery Report, which the Saville report exposed as lies.

Mike Jackson was the adjutant at Bloody Sunday; he transferred the methods from Ballymurphy to Derry. He is a war criminal for what he did in Ballymurphy and Derry and the Irish government should arraign him before the International Court of Justice in The Hague for those crimes.