KUWG members and supporters Scrap Universal Credit, Sack Ester McVey!
At 12 on Friday 6th three SF supporters, GD, JC and TB attending the Kilburn Unemployed Workers Group picketing of the DWP HQ in Westminister.  GD drafted the letter from KUWG damanding the resignation of Ester McVey because she lied to parliament about the content of the National Audit Office report on Universal Credit, displaying contempt not for the Sir whatshisname  NAO director but to the unemployed and disabled victims of the vicious attacks by the Tories.
Significantly neither the SPEW nor the SWP papers carried the story, so prominent in the mass media and so important to the most oppressed. One outraged SWP member from Glasgow complained bitterly at the end of Marxism 2018 that Scrap Universal Credit and End the Vicious Sanctions Regime were not amongst the posters for the event and he thought that had been agreed in advance.
Socialist Fight supporters attended various other events over the weekend. JC attended the International Brigades tribute on the 80th anniversary if the Battle of the Ebro. A shadow Labour minister spoke.

“Had Spain turned as the Brigaders wanted, the rise of fascism in Germany and Italy might been avoided, with all its horrors” the Morning Star reports him as saying. History not his strong point then, as Mussolini triumphed in Italy in 1921 and Hitler took power in Germany in 1933 and the International Brigades were not formed until 1936.

Jeremy Cornyn also sent a message of support. He quoted La Pasionaria, Delores Ibbraruri, who hailed the IBs thus, ” you are history, you are legend”  and to emphasise socialism was not on the agenda in 1936 Spain and 2018 the IBs “raised the flag of freedom and democracy”, the MS reports.
Those who might raise the fate of POUM leader Andreas Nin at the hands of the German IBs or the the Italian anarchist leader Berneri and the rest at the hands of the GPU because they threatened Stalin’s relationship with Roosevelt and Churchill by fighting to defend the socialist revolution already underway,  were not welcome.

GD and SF supporter GM attended the National Shop Stewards Network conference on Saturday and IB, GD, ID and GM attended various sessions of Marxism 2018.
The NSSN proudly announced the affiliation of Unite, it’s 10th national union to sign up. While the SWP and others were affiliated the controversial clause was no. 3 where the pledge was not to interfere in the internal affairs of affiliated unions. What non affiliated unions like Unison did to internal political opponents was fair game but no criticisms was allowed about those 10 union bureaucracies, selling out strikes and victimising militant workers.
Most of the meeting was a procession of officials from the affiliated unions telling us how good they were. Bakers union man was good as usual. The PCS man condemned the attempt to impose far worse wages and conditions on new starters, “we must not pull up the ladder on the next generation of workers” he stayed.
I got a few minutes and pointed out that what Unite and Ucatt, now incorporated into Unite, did in construction was cynical and they had a very corrupt relationship with construction companies and subcontractors.  On Blacklisting one current Unite official was named by an agency director as participating in the blacklisting of his own members. Brian Higgins, of the old Building Workers Group, had sent the evidence to Len McClusky several months ago but he had not acted.
I referred to the PCS defence of new starters and pointed out this was exactly what the TGWU and then Unite had not done on the London buses from subsidy cuts and privatisation in 1993-4. Here London wide pay and conditions were abandoned by the TGWU and 13 different negotiating teams reached 13 different sets of pay and conditions as if the national union did not exist. Inevitably sweetheart deals favourable to the convenor were stuck and corrupt relationships were bound to develop in these conditions.
This continued until the big Westbound Park strike in 2002 against the 15 different pay rates in that garage. Victory there resulted in a rapid eliminations of different pay rates and the union campaigned for that up to the financial crisis of 2008 when union bureaucracies everywhere began givebacks to bosses to help them out. In many bus companies union full-timers and convenors signed deals for far worse terms and conditions for new starters without consulting the membership. In some they did not even consult the garage reps.
Now they complain about all the different rates they themselves imposed between the companies.  But it’s far worse than that. On my last visit to one of my old garages there were 12 different rates within the garage. All as a result of the 5 or 6 year competitive tendering rules for all routes.
Unity across companies and even within garages in these conditions is very difficult.  I made contact with a few friendly bus workers and managed to make a few of these points.
At Marxism IB reported the IBT supporter Barbra D was attacked by an RMT leader over her stance on the state banning fascist marches and the RMT position on that. The RMT man said RMT members had refused to move a train full of BNP members several years ago. We await IBT clarification of the exchange. 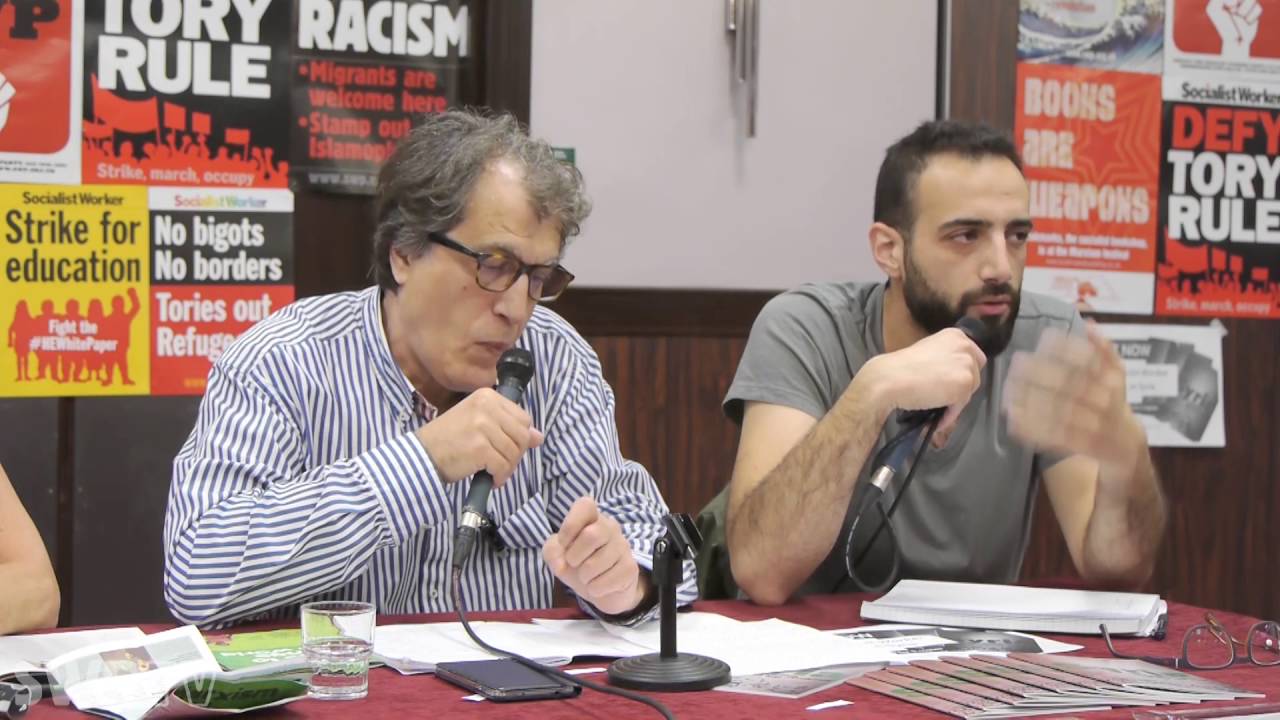 Marxism 2018: Syria today: from revolution to war – Ghayath Naisse of the Revolutionary Left Current [1]
https://www.youtube.com/watch?v=MV85KQ762dE
GD attended 4 Marxism sessions on Sunday 8th some with ID and TB.
The meeting on Syria was bad, a real case of civilisation mongering with speaker Ghayath Naisse, a “Syrian Marxist” accusing the USA of abandoning its allies and mentioning the USA in the same breath as Iran, Turkey, Hezbollah, and Russia all intervening to stop the revolution.  He was for “justice and national liberation” and a United Front against the “foreign forces”.  He supported the “democratic and revolutionary forces”. Admittedly they were “scattered” but were sure to regroup in the immediate future.
I got to speak but as soon as I began saying controversial things the chair began frantically waving at me to shut up. I made the point that although Tunisia and Egypt saw dictators toppled and these were genuine movements from below Libya was very different and, after an initial period of genuine struggle against Assad in Syria, the jihadist forces backed by Saudi Arabia and Qatar and Turkey on behalf of the USA took control and their agenda had nothing to do with revolution.
Despite the reactionary neoliberal and corrupt character of the Assad regime it was secular and progressive against the jihadist monsters who not only killed other religions but also gays and lesbians and any other minority groups it encountered.
I welcomed the developments in Kurds where they were betrayed by both their allies Russia and the USA in Afrin and then The USA handed over Manjib to Turkey with the agreement of the SDF leaders.  Now the YPG are reported to have opened up negotiations with Assad over autonomy terms.
I will report on the other meetings later, the Alex Callinicos Gramsci meeting and the John Kelly and Joseph Choonara debate on John’s book Contemporary Trotskyism. Others may want to report on the quite good Ilan Pappe meeting and anti-fascist meetings.

[1] We encountered the Revolutionary Left Current before in the shape of Joseph Daher, in the SF post, Plain Tales from the Hills of the pro-imperialist ‘left’, by Gerry Downing, 18-12-15,
https://socialistfight.com/2015/12/18/plain-tales-from-the-hills-of-the-pro-imperialist-left/

In that very long article, he utterly fails to find anything wrong with what he calls “the West” except they are failing in their duty to assist “the revolution” adequately. For example: “the absence or lack of any kind of “large” organised and decisive military assistance of the USA and/or Western states to the Syrian revolutionaries is another proof of the lack of will for any radical change (!!!) in Syria.” US finance capital only wants the best for Syria, what serious ‘Marxist’ could question their motives in that war?

The essential message from these diatribes, if we leave aside a few pseudo-leftist phrases, would not be out of place in a far-right Neo-Con propaganda sheet. ▲