The many, many reasons Universal Credit is not fit for purpose

The New Statesman: The many, many reasons Universal Credit is not fit for purpose 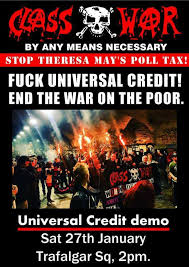 18 OCTOBER 2017. The New Statesman guide to a welfare overhaul that is already causing misery.

MPs are calling for the rollout of Universal Credit to be paused to allow time to fix a welfare system that the evidence suggests is broken. The New Statesman has been documenting the many problems associated with the controversial reform, which is designed to combine myriad types of welfare into one payment.

From the devastating human cost of delayed payments and mistakes, to the chaos engulfing those responsible for administering the benefit, here are some of the many reasons why Universal Credit, at least in its current form, is not fit for purpose:

A woman with no resources is a woman who can’t leave: why universal credit is a feminist issue

By putting control of the household income in the hands of one individual and imposing lengthy assessment periods on people in crisis conditions, universal credit is giving support to abusers, and removing options from survivors.

What happens when you have to wait four months for Universal Credit?

“It makes you feel upset, it makes you feel depressed, because at the end of the day, you don’t have anything to support yourself with, and you’re seeing more and more money [owed], so you’re like, ok, who am I going to call?” he asks. “I haven’t got any parents, what am I meant to do? It does make you stressed.”

“I was one of the ‘lucky’ people to be a Universal Credit claimant in an early roll-out location,” writes a young claimant. “In other words, I got to experience a lot of the early flaws of the system first-hand.”

“It destroyed every ounce of life that I had”: how Universal Credit is pushing people to beg for money online

“It just felt hugely degrading,” says Heather, a 40-year-old single mother who claims UC and set up a GoFundMe page. “It was just somehow easier to put it on the internet and ask strangers to help me than it was to ask anybody that I knew.”

As a Universal Credit case manager, my job is turning away those in abject poverty

“I see masses of suffering on a daily basis,” an anonymous case manager writes. “Case managers are well trained to deal with any claimants threatening suicide either by phone or by journal message, due to the recurrence… Those who have worked in Universal Credit since the early days have become hardened, having dealt with thousands of vulnerable people. It’s very difficult to tell claimants, ‘I’m sorry but we can’t give you any more’, even if we know that children will suffer and go hungry for weeks.”

“It’s disrespectful”: Universal Credit claimants have to pay to call the benefits helpline

“If you’re actually really broke, you can’t find out what’s going on, you can’t contact anyone, you can’t do anything. So I think it’s a bit disrespectful that they’re actually charging you for phone calls. It should be a free service.”

“Absolute hell”: what it’s like working on the front line of the Universal Credit roll-out

“I would say – pause the roll-out immediately,” says a DWP worker worried about staff training and morale. “Going back isn’t an option. You pause it, and start recruiting sufficient staff to make it work.”

Under Universal Credit, it’s not enough to be in work. You have to be earning a certain amount as well. This small print could affect millions of part-time workers and second earners, often working mums. The rule seems likely to just remind them that they are not good enough, at least in the eyes of the DWP.

The first person testimony of one of those part-time working mums. She writes: “I couldn’t sleep all night – I just lay there panicking. I was trying to think, what bills do I have that I can miss paying?”

This system is not just failing individuals and claimants, but it is also a system failing in objective terms. Martin Whitfield, the MP for East Lothian, a pilot area, writes about the first-hand experiences of his constituents.

Citizens Advice is on the front line when Universal Credit claims go wrong. The government claims these glitches can be warded off by “advance payments” – but these have to be paid back and, as Citizens Advice’s Kayley Hignell writes, can push vulnerable people into debt.

The impact should not be underestimated – this is not just about finances, but families’ lives and the emotional stress and turmoil that can follow.

A woman with no resources is a woman who can’t leave: why Universal Credit is a feminist issue

In a couple, Universal Credit is paid to a single bank account, and changes depending on your joint earnings. But what happens if your partner receives a bonus, and doesn’t want to share?

There’s a cruel double bind here. Most people claim benefits precisely because they are in difficult personal circumstances. They have lost their job, got sick, or broken up with a partner and had to move house. Those same circumstances make dealing with bureaucracy more challenging. When the computer says no, it doesn’t just take away one of half a dozen benefits; it can disrupt the only assistance people are getting.

In one month alone, a food bank gave three-day food packages to 364 adults and 177 children, the vast majority of which were a result of benefit delays.

“As she put the phone down and I reflected on the call, it felt like a scam. This was the government luring me into unnecessarily phoning up through fear of later being unable to pay for rent, food, bills, and tax.”

“It is mainly poorer households who are least likely to have access to the internet, so the high cost of calling up about universal credit is likely to hit them hardest.”

“People will misuse their Universal Credit, rightly or wrongly. If it’s [the money] all lumped into one bank account, and only the partner or husband has access – that’s a bad, sorry road.”

Universal Credit: the anatomy of a government failure

“From what I know in the context of the reasons for some past IT-related failures, I’d say that Universal Credit is in a worse position than some big programmes because it started, and continued, without senior management having any clear idea how it would work.”

Italy: The general election of March 4 »
« The Zionism of the AWL is truly disgusting