What lies behind the advance of the politics of Stalinism in the British Labour movement? No Vote for Bob Crow’s No2EU Europhobia! By A J Byrne 15/2/2009

The 2009 British jobs for British workers supported openly by the CPB/Morning Star, somewhat shamefacedly by the Socialist Party and yielded to eventually by the SWP prepared the ground for the national chauvinism of the Brexit/Lexit campaign.

We will show that the methods and politics of Stalinism have advanced in the British labour movement because of the strengthening of the hold of the TU and Labour bureaucracy over the working class and the progressive capitulation of the ‘far left’ groups to this bureaucracy via the medium of the CBP/Morning Star. It is our contention that this opens the ground for the advance of genuine revolutionary socialist politics which looks directly to the working class itself, increasingly disgusted with this bureaucracy and looking for a way to fight them.

We can chart this advance from the preparation and launch of the Peoples Charter. This was pure Stalinism in its politics and methods. It was prepared in secret behind the backs of the ranks of the labour movement; it was drafted by the CPB, all its politics were already decided before opening it up to discussion by ‘representatives of the working class’. These plenipotentiaries, like the RMT’s General Secretary Bob Crow, LRC leader John McDonnell MP, Prison Officers’ Association’s Brian Caton, Nick Wrack of Respect and Dot Gibson, General Secretary of the National Pensioners Convention, met behind closed doors, refusing entry even to leading RMT activists. Naturally it was not discussed during its preparation within the ranks of the RMT, the LRC or anywhere else because there are just too many leftist there who might object to its appalling reformist, nationalist outlook.

It was first publicly touted by Mary Davies, veteran CPBer, in 10 January at the RMT convened conference on “the crisis in working class political representation”. Workers Powers Jeremy Dewar was there,

“Likening the Peoples Charter to the great Chartist movement in the middle of the nineteenth century she (Davis) said, “The Charter was not a party, but it was a mass, political, anti-government movement. Let’s start with extraparliamentary struggle – the legacy of the Chartists.” The opposite, of course, is the intention, “How would it achieve its aims without laying down action proposals and promoting new forms of organisation – not just against closures, but for occupying plants and offices to stop them in the breach? Not just against the fascist British National Party’s racism, but for community self-defence to stop them taking over our streets? We need a programme for working class action, not a people’s charter aimed at uniting unions, workers’ organisations and the left with middle class parties like the Greens and Plaid Cymru.”

To give meat to this development we had the chauvinist Lindsay Oil Refinery strikes beginning at the end of January culminating in the 24 February “foreigners out” demonstration. That the Socialist Party could have found themselves on a demonstration led by a Union Jack waving bigot desperately trying to drown out this obscene chant from a labour movement event must have bothered their better members. The SWP initially rejected the chauvinism of Lindsey only to collapse into supporting the SP compromise by hailing SP member’s Keith Gibson leftist programme which everybody, crucially including the Unite bureaucracy led by Simpson, ignored because it did not repudiate the original Bj4Bw demands.

Similarly with the AWL, a good initial position but ended up hailing the “victory” at Staythorpe. Ditto the USFI’s ISG/Socialist Resistance and Permanent Revolution. So in the end only three groups stood against the chauvinist tide, Socialist Fight, a tiny group, Workers Power and the Spartacist League. The Campaign against Immigration Control (CAIC) also took a principled stance. The International Bolshevik Tendency were unable to take a position one way or the other, apparently because of internal problems on the issue. But there were many individuals who took a principled stance and stuck to it on the blogs, including members of the SWP and other groups and clearly some other were repelled but stayed silent through group loyalty.

Then we had to endure the spectacle of Unite’s Left Caucus on 21 February. This was again prepared by ultra Stalinist methods and politics. And then we moved on to the No2EU launch. Again prepared by the Stalinists themselves in secret, progressively allowing in other ‘leaders’, the same methods and largely the same individuals as the Peoples Charter.

From the outset, there was absolutely no question of allowing any internal democracy.  Its name was registered in advance with the Electoral Commission, there was no rank-and-file consultation, no voting, no election of leaders. This time groups were excluded by name on the basis of their position on Bj4Bw, the SWP, the AWL and the CPGB and unnamed ‘others’. Even those who opposed the chauvinism of Bj4Bw but hailed the “victory” of the workers won on that basis and tried to square the circle to remain in the loop were out in the cold. Those who took a consistent position were obviously deemed to be so barking mad as not to deserve consideration. Socialist Resistance was in a unique position, having taken the same position as many of the excluded groups (no to Bj4Bw, yes to the strikes for those aims) but they slithered in by the tradesman’s entrance as part of Respect. The SWP too was in somewhat of a dilemma. They were excluded by name but in Scotland, as part of the Tommy Sheridan-led Solidarity they could gain backdoor admittance. The Stalinist wanted Tommy, whose Saint Andrew’s Saltier was just as good as a Union Jack to them, so the SWP had to equivocate.

However, for the other groups excluded by name and for PR it was now time to put forward their undying political opposition to chauvinism and backward nationalism, having failed so miserably to do so over Bj4Bw. Martin Thomas for the AWL let rip; “The expanded platform published on the website of the No2EU campaign for the 4 June Euro elections denounces “the so-called ‘free movement’ of labour” in the EU and “the social dumping of exploited foreign workers in Britain”.

How can this be read as anything other than a “left” version of the chauvinist cry: “Kick out the Poles and other migrant workers”? As a macabre addition, the No2EU website has as its masthead, above all such policies: “It’s a black and white issue”. You have to assume that this is bungling tin-earedness rather than racism, but it is bungling tin-earedness of an exceptional order. The other question that arises is: how, where, and by whom was this expanded platform decided?”

“It’s a half baked campaign with a reactionary programme. Socialists should not support it. These are the same union leaders who have not organised a single official strike against the recession. It is utterly misconceived to believe that standing in the Euro elections, on a nationalist, not left wing at all platform, is a step forward. They will get a derisory vote. And while all the fuss is going on the recession will be claiming more jobs”.

But the top prize for double speak and hypocrisy must surely go to the USFI’s Socialist Resistance. Having listed horrendous problems with the platform they decide to support it anyway for no given reasons at all. They might just as well have openly admitted to being gross political opportunists—just do it! Here are the ‘problems’ they have spotted:

“The most significant of these is its top-down structure and method of organising… One (other) example is the rejection of “the so-called ‘free movement’ of labour”. We support the right of any worker to work anywhere, with the same rights, with equal access to jobs, and to hold the union leaders to account for not defending wages, pensions, and working conditions.

An important political task which faces any left-wing campaign against the EU is to clearly separate itself from the much bigger right-wing nationalist campaign against the EU — led by the Tories, Ukip and the BNP. Otherwise, things can go badly wrong! (!!!) No2eu has been weak (!!!) on this aspect. There is nothing in the large print on its leaflet which defines it as a left-wing campaign — and first impressions are important. 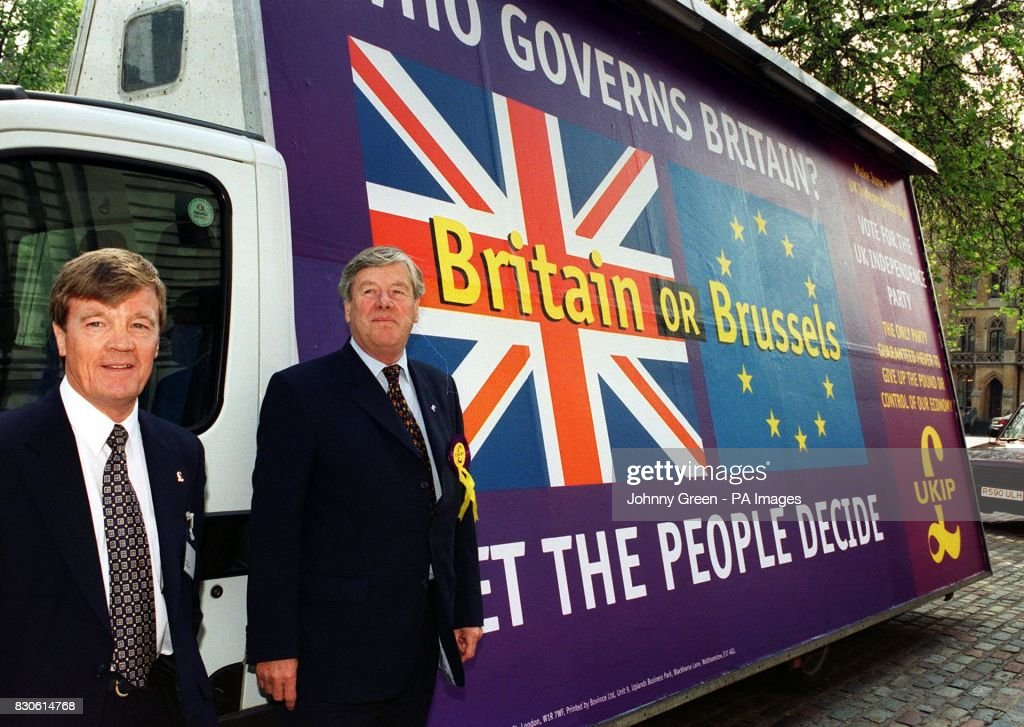 Most worrying was the decision of a key RMT organiser within the No2EU campaign recently to speak on a Campaign Against Euro-federalism platform along with former Tory MP Teddy Taylor. This is a bad sign and needs to be corrected quickly. (!!!) No2eu has to make very clear that it is a campaign in favour of the rights of working people and has nothing in common with Tory or  Ukip style Euroscepticism (!!!).” (our !!!s)

There you have it. Stalinist methods and politics advance because these fake revolutionists capitulate to them and never fight for their own declared revolutionary politics which they are clearly progressively abandoning in lockstep with the LCR of France. In times of relative class ‘peace’ centrists such as these equivocate for decades, but in heightened class struggle, as it is now emerging, the hypocrisy of this approach is very vulnerable to apposite propaganda.

They have all-but-lost the political ability to relate to the independent interests of the working class not mediated through the left TU bureaucracy. They are unable to see the relevance of revolutionary socialist politics in fighting for rank-and-file mobilisations that set the working class base against the bureaucratic superstructure to open up space for the propagation of revolutionary ideas and the building of a revolutionary party. They have become conservative and opportunist behind their ‘Marxist’ verbiage, still victims of imperialism’s neo-liberal offensive.