The Run-up to the Mobilisation

After Francois Hollande abandoned his bill to revoke French citizenship for “terrorists” on 30 March (another measure in fact aimed against the working class movement which is composed of worker’s coming from all over the world, many of whom have acquired French citizenship), there comes another setback for the pitiful Hollande-Valls team.  This weak, reactionary, so wrongly called “Socialist” government, faced a strong test on the street on Thursday 31 March, with a new mobilization of the working class and the student’s youth. The unions’ organizers had promised a “big one” for this demo against the Labour Act against workers and employees which is widely considered to be “toxic”.

The movement is widespread: strike notices were filed at the RATP Metro of Paris, SNCF Railroad network, EDF the main electricity company, Air France, Total that has almost the monopoly of oil refineries and gasoline distribution, in air traffic control and more generally in the public service, trade, media, ports and docks, casinos …

More than 200 parades, demonstrations and rallies we to take place across France, according to the count of the CGT.

For them “Obviously, this Bill does not allow the necessary jobs creation, generalizes insecurity and exacerbates inequalities at work in particular against women and young people,” say the seven unions who are in the mobilizing initiative (CGT, FO, Solidaires, FSU, UNEF, LDIFs, UNL)

This report has been taken from the public press just before the demos, all over the country that will bring hopefully more than one million people to the streets. People “en colère”, angry people then.

The mood was very militant all over the whole month with three other demos (every Thursday in March) covering the whole country and with a massive participation of the student youth and the more militants layers of the working class.

But in the week beginning 27th April there has been an even broader mobilisation of the militant base (all left parties took part but not the so wrongly called Socialist Party).

There has been large militant activism with the distribution of leaflets calling to stop the work and to come to the demo were seen in Metro’s and buses stops and in the main works, and with a quite good response coming from the people and from workers. This time, the Unions, always unwilling to mobilise are in a more fighting mood pushed by the rank and file which have not given the bureaucrats the slightest opportunity to sell out the ongoing upward movement. There was a cry coming from below that forced the Unions to unite and act.

Furthermore, in the Bill there are some articles that will bypass the big Unions giving negotiation power to the production units, that is, the boss can make “agreements” with the workers of any works or enterprise taking no account of any general or national Unions-Bosses agreement nor even general laws. It would be between the boss and the workers. In fact, it will be the law of the bosses because in most of little and medium sized enterprises there is no one unionist (8% only of the worker’s force are unionized) or he or she is isolated and the rank and file terrorized by the perspective of unemployment.

The big Unions have then no interest in the law which will reduce the Unions to almost nothing. That’s also one of the reasons why they, for once, are facing bosses and government a little bit more.

What shall become of all this?

It is not quite clear. For the more militants, NPA, LO, Anarchists, some fractions of the PCF and for the more militants layer of the working class there should be a continuation, with a General Strike in perspective. But this issue needs even more militant spirit coming from the broader masses and I could not tell if they will answer in this moment, this day, to such a call.

This is only the beginning of a process, if it is a real one, and the broader layers of the working class are still terrorised by the unemployment and the lack of militant presence in their neighbourhoods and working places. This can also be felt when distributing leaflets.

The more exploited layer of the working class are or indifferent or even afraid if, when confronted with militants, they find some hope and some class conscientiousness awaking in their eyes.

This signifies that the movement, even if it’s a healthy one, has a long way still to go.

Perhaps we will have here the traditional French working class answer to the petit bourgeois movements that happened in Greece and Spain.

The aftermath of the Demo.

The Unions has counted 1.2 million people in the streets and their leaders has stated that “the iron arm is engaged” (French expression for the battle has begun) and they have called for two other “mobilizations” the 5th April (next Wednesday) and the 9th (Saturday where the ones who cannot strike because of the bosses repression in medium and little enterprises can come…and will come).

Here in Lyon the Demo was bigger than the others one by the double at least (I could not count by myself because I was carrying a heavy load, but it took the people almost one hour to pass me, they were quite packed in a broad avenue). In Paris it has been said that it was even better (and Paris is the important thing as always), a lot of people also in the biggest cities of France, Nantes, Marseille, Toulouse, Bordeaux, Lille, Strasbourg, etc. Many other demos in medium size cities and even in little ones with relatively big concentrations of the working class and students which are very concerned by their future.

At the end of the demo there were more or less “peaceful” encounters with teargas between the police and the more militant youths mostly the Jeunesse Communiste, Anarchists, others groups but not the Lutte Ouvrière or NPA’s except isolated individuals.

The fact that the Unions are today calling for more, shows better than anything that the government finds itself in a very weak position, to the brink of yielding, or because the pressure coming from the rank and file is overwhelming (I don’t think so for the moment). Some militants said that Hollande has yielded on “denationalisation” only to be more determined on the “Labour Law”. 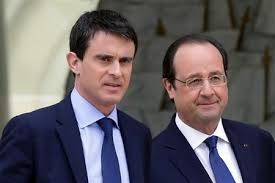 French President Hollande and Prime Minister Valls. The Hollande-Valls government can fall at any minute. Not only because of the pressure coming from the street also for polling reasons (presidential elections are in a year) and because is it divided internally.

Valls has his own presidential agenda and Hollande doesn’t need to be re-elected. This is pure illusion, he is the least who can be re-elected all over the world. He has lost his electoral support because these worker’s which are today against his reactionary policy were the same who has voted for him.

The “right” (the French Conservatives) just have to push him a little because of his abandonment of the Bill on “deprivation of the French nationality” and most of all for its incapacity to stop the “movement de la rue” the worker’s movement. But they won’t do it. They will not risk, at the present moment, an institutional crisis, they will just wait a year to win the elections, surely with a massive abstention coming from the worker’s.

Here then, things are gaining some momentum and going in the good direction. The mood of the militants is good, the bureaucrats are following and having no interest in betraying for peanuts and there is no one party that could control the movement to sink it (no one has the strength nor the forces to do it).

The more backwards masses will come in some time. For the moment they observe and think and test their possibilities without risking their jobs.

If the movement goes up the next week (Saturday 9 will show us a lot) the less conscious layers will join the more militant ones to make again one of those historic events the French working class along the centuries has given us. 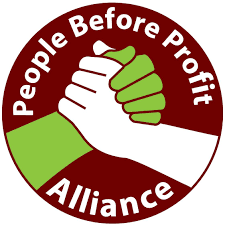 Report of the People Before Profit Alliance

France: Demos will continue in spite of police violence

Place de la République in Paris has been occupied for the last three nights, despite police emptying the square every morning. People are talking about the birth of a new movement, like the Indignados in Spain.

Confronted with massive protests over its proposed changes to employment laws, the French government has responded with savage violence.

As over a million French workers, students and school students took to the streets to say no to the dismantling of labour protection laws on Thursday 31st March, CRS riot police used tear gas, flashballs and water cannon, charged crowds and chased students and demonstrators through the streets. Undercover cops from the BAC (anti-criminal brigade) also seized people, beat them up and arrested them.

As the demonstrations ended, many young people proceeded with plans to peacefully occupy public squares, with the aim of continuing the protests throughout the day and night. These groups were singled out for massive and unjustified police violence, which can be seen on the many videos going viral on the social networks.

Faced with the evidence of police brutality, education minister Najat Vallaud-Belkacem made a statement condemning ‘all violence’, but UNEF students’ union leader William Martinet called on the government to admit its responsibility for what was happening.

The scale of the violence is truly shocking. Online newspaper Mediapart reported violent clashes between police and demonstrators in Paris, Rennes, Nantes, Rouen and Toulouse. There have been dozens of arrests.

The repression come at the end of a week in which the police violence has escalated, following the savage beating of a 15-year old school student at the Lycée Bergson in Paris, which sent shock waves across the country, and the violent evacuation of a student assembly at the Tolbiac campus of the Sorbonne.

Yet there are signs that the repression is only fanning the flames of resistance. Despite attempts by some trade unions to hold back action, the March 31st demonstration has been the biggest so far. According to the CGT trade union, there were 160,000 demonstrators in Paris, 120,000 in Marseilles, 100,000 in Toulouse and 30,000 in Bordeaux. There were strikes in transport, health and education with many urban transport networks paralyzed. Over two hundred secondary schools and universities were blocked.  The port of Le Havre was brought to a standstill by striking dock workers.

The government’s ‘reforms’ mean the end of nationwide agreements over pay and conditions in favour of local agreements, giving bosses the right to hire and fire with minimum penalties for unfair dismissals, for example. The legal working week is to go up to 60hrs. Although 70% of French people want the law withdrawn, Prime Minister Manuel Valls is staking his political reputation on it going through. His only strategy is the ferocious repression we’ve seen this week.

Unions have called for a new demo on April 9th, while the students and school students plan to demonstrate again on April 5th.