A misrepresentation of Trotsky on the Ukraine by a petty bourgeois moralist: 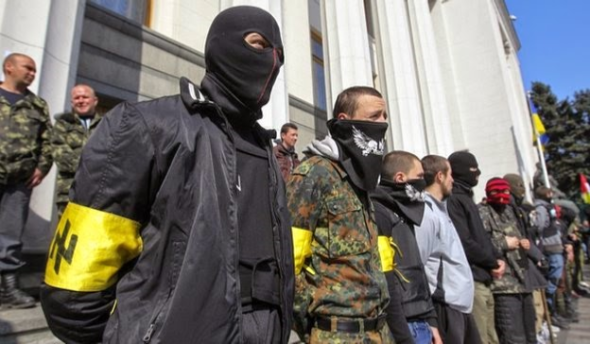 Prince Charles’ timely statement “Now Putin is doing [in Ukraine] just about the same as Hitler”, which intimates that Moscow rather than Kiev has embraced a neo-Nazi Agenda. Look at the photos displayed in the BBC’s report. The BBC suggests that these Right Sector thugs are acting responsibly. (Photo showing Right Sector activists outside parliament in Kiev, 28 Mar 14)

A reply to Michael Calderbank, By Oliver Coxhead

In a recent post on the social networking site Facebook LRC leading member and supporter of the ‘Ukrainian Solidarity Campaign’ Michael Calderbank attempted to give political and even revolutionary weight to his reactionary position on the current crisis in Ukraine. Under the entry ‘What Trotsky had to say to the “sectarian muddleheads” who opposed the independence of Ukraine’ we have the following article by Trotsky from 1939 re-posted: Independence of the Ukraine and Sectarian Muddleheads. Above the link to Trotsky’s article Calderbank quotes what we must assume he sees as the significant paragraph of the text and the justification for his position and his opposition to those in the Labour movement who take the anti-imperialist/anti-fascist position:

“To speed and facilitate this process, to make possible a genuine brotherhood of the peoples in the future, the advanced workers of Great Russia must even now understand the causes for Ukrainian separatism, as well the latent power and historical lawfulness behind it, and they must without any reservation declare to the Ukrainian people that they are ready to support with all their might the slogan of an independent Soviet Ukraine in a joint struggle against the autocratic bureaucracy and against imperialism.”

This is Trotsky’s call for Ukrainian independence at a time when Ukraine suffered under the Stalinist bureaucracy, he made it clear though that it must be an independent ‘Soviet Ukraine’ as an ally militarily to the USSR. Later in his article Trotsky states that Ukraine ‘will herself desire and know how to reach the necessary economic agreement with the Soviet Union, just as she herself will be able to conclude the necessary military alliance.’
Trotsky was clear that independence must be bound up with preservation of planned economy and socialised property created by the October Revolution and, as such, would mean defence of the gains in the rest of soviet territory despite the rule of the degenerate bureaucracy.
The national independence of Soviet Ukraine would mean the plan could be tailored to the needs of the Ukrainian people and not the Kremlin bureaucracy, but they would still support the plan of the rest of the USSR because it would ‘know how to make the necessary economic agreement’ and therefore improve the rationality of the plan. Consequently an independent Soviet Ukraine would not only weaken the Kremlin bureaucracy but also improve the plan for Ukraine and thereby give an impetus to socialist development in the rest of the USSR.
Trotsky was clear that the bureaucracy’s strangulation of the Ukraine had turned many of the masses, such as the peasantry and petty bourgeois as well as workers and emigrants of Ukraine, away from socialism which they had previously supported. The official communist movement headed by the Kremlin bureaucracy had no answer to Ukrainian independence as it stifled national expression and implemented disastrous agricultural policies. The loudest voices in favour of Ukrainian independence were the fascists and religious reactionary leaders:

“Of enormous political importance is the sharp turn away from the Soviet Union by Ukrainian democratic elements outside the Soviet Union. When the Ukrainian problem became aggravated early this year communist voices were not heard at all; but the voices of the Ukrainian clericals and National Socialists were loud enough. This means that the proletarian vanguard has let the Ukrainian national movement slip out of its hands and this movement has progressed far on the road to separatism.”

The answer Trotsky stressed was for the revolutionary workers’ movement to lead the desire for national independence as part of continuing socialist revolution, i.e. the political revolution against the Kremlin bureaucracy. In the case of Ukraine, to demand independence from centralised bureaucratic rule while defending the gains of the revolution and improving them by fulfilling the needs of the local population and to integrate with other soviet republics as part of the ongoing development for socialism.
To ignore the desire for independence meant sections of the masses would be driven to bourgeois nationalism and fascism. Trotsky was therefore clear it must be an independent soviet Ukraine. This is in complete opposition to the Ukraine envisaged by the Organization of Ukrainian Nationalists led by Nazi Stepan Bandera. This position must be seen in the context of its time, the late 1930s on the eve of imperialist war and military threats to the USSR, the world’s first workers’ state.
Now we must examine Calderbank’s use or rather misuse of Trotsky’s article today. Firstly, he is of course using it completely in the wrong context; the USSR no longer exists and, obviously, this has thrown back consciousness of many workers’ in Ukraine and Russia. Ukraine is independent as a bourgeois republic, not a soviet republic and its borders have altered several times since Trotsky wrote his article. It is not Trotsky who is wrong though but Calderbank who chooses to take the article out of context as justification for adopting an anti-working class position.
In the Ukraine now we have the corrupt but elected government of the oligarch Yanukovych deposed by an unelected coup-government comprised of ultra-nationalists and Nazi descendent organisations such as Svoboda. Yet these nationalists plan to give up even their bourgeois independence to the imperialists of the EU and United States. We now have the situation where the Ukraine could become another vassal of US imperialism where once it had been a vassal of the Kremlin bureaucracy, a worse prospect! It would of course then become a NATO member, strengthening US imperialism’s military presence right up to the Russian border.
Clearly the imperialism of the US and EU means no true independence for Ukraine. There was more independence under the local capitalists of Yanukovych. Imperialism will mean the domination of Ukraine and Ukrainian workers by the IMF and World Bank as well as US corporations. The economic deals local oligarchs had with Russian capitalists were more beneficial to the population than would be imperialist domination. Russia is not an imperialist country, it is undoubtedly a capitalist one but has offered a better economic deal to Ukraine. The EU offers de-industrialisation, privatisation, wage cuts, social security cuts and debt. Workers in Ukraine can look to Greece, Ireland and Portugal to see their future, behind which is the finance capital and military of the U.S., ever too keen to enforce compliance using local fascist gangs. What sort of independence is that? Calderbank is silent on these facts.
In the Donbass region, focused around Luhgansk and Donetsk, there has been a groundswell of opposition by the working class to the Maidan and its coup-government which includes fascists. Calderbank’s lack of dialectical thinking means that he cannot conclude that today’s officially ‘independent’ Ukraine dominated by oligarchs and facing the domination of US/EU finance capital has developed its own internal movement for regional independence in the face of this imperialist onslaught. Trotsky’s method applied today means support for Ukrainian independence from US/EU imperialism and the self-determination of those regions which are at the forefront of the opposition to imperialism and its fascist gangs. Trotsky warned in the article Calderbank cites as his justification that ‘the very independence of the Ukraine would not be long lived in an imperialist environment’ and that ‘imperialism can be overthrown only by the proletarian revolution.’ We see the proletariat of eastern Ukraine now in open revolution and expropriating the oligarchs, and Trotsky spoke of the Ukraine as having developed a strong working class: “A powerful and purely Ukrainian proletariat has been created there by the development of industry. It is they who are destined to be the leaders of the Ukrainian people in all their future struggles.”

According to the BBC, the Right Sector has no Nazi roots, it was formed as an umbrella group in November 2013: “Originally set up as an alliance of ultra-nationalist groups in November 2013, the Right Sector is now a party and its leader, Dmytro Yarosh, is running for president…” The BBC report fails to mention the names of the constituent organizations of Pravy Sektor: They are Trident (Tryzub), led by Dmytro Yarosh and Andriy Tarasenko, and the Ukrainian National Assembly–Ukrainian National Self Defence (UNA–UNSO), a terrorist paramilitary organization supported covertly by NATO (see image below) and several other right wing paramilitary groups. (Photo showing UNA-UNSO Paramilitary)

This same proletariat has its very existence threatened and its own rights in particular the right to speak their first language. As mentioned earlier the borders of Ukraine have altered considerably since 1939 and many Russian speakers live in the east and have intermixed with Ukrainian speakers. The calls for Ukrainian independence and ‘national unity’ by Calderbank and the ‘Ukrainian Solidarity Campaign’ mean a centralised ultra-nationalist state which suppresses the rights of minorities. Trotsky also had something to say about these opportunist supporters of ‘independence: “Opportunism consists in a passive adaptation to the ruling class and its regime, to that which already exists, including of course, the state boundaries.”

Calderbank and his ilk would rather preserve the state boundaries as they are at the expense of the working class in eastern Ukraine, even though they have expressed their will for autonomy through a referendum on this issue. Opportunists such as Calderbank line up with Svoboda, the US and EU to condemn the working class resistance as ‘terrorist’ and influenced by ‘Russian agents’, yet nothing is mentioned of the fascist terror gangs, CIA agents and mercenaries operating in Ukraine. Finance capital again uses fascism to impose its domination and, unfortunately, many on the left have chosen to support imperialism in the way they did at the start of WWI a hundred years ago, exposing themselves now as they did then as liberals and not Marxists at all.
Throughout the debates on this fundamental issue of support for the movement against imperialism in the Donbass, many leftists have been outraged at military methods and personnel being employed by the Donetsk and Luhgansk Peoples’ Republics and the fact some Kiev supporters have been kidnapped or tortured. The liberal prejudices of these middle class liberals and individuals such as Calderbank reveal their hostility toward the working class taking up the struggle against imperialism and fascism, in the course of such struggles that would mean enemies real or suspected will be given a hard time. This is a feature of revolution. They moralise about how ‘both sides are as bad’ and such arguments, the ‘moralizing philistine’s favourite method is the lumping of reaction’s conduct with that of revolution’ Trotsky noted about such leftists. (Source: Trotsky, L, Dewey, J, Novack, G, Their Morals and Ours, Pathfinder, 1973, New York, p13)
Of the middle class moralist, Trotsky wrote:

“Understanding neither the origin nor the sense of struggle between the proletariat and the bourgeoisie, discovers himself between the two fires, he will consider both belligerent camps with equal hatred. And who are all these democratic moralists? Ideologists of intermediary layers who have fallen, or are in fear of falling between the two fires. The chief traits of the prophets of this type are alienation from the great historical movements, a hardened conservative mentality, smug narrowness, and a most primitive political cowardice.” (Source: Trotsky, L, Pathfinder, 1973, pp. 14-15)

This is a fitting description for Calderbank and the ‘Ukrainian Solidarity Campaign’ and the social strata they represent, namely the middle class and labour bureaucracy. Meanwhile the working class in the Donbass continues to fight the fascists and imperialists in its quest for survival and self-determination.

VOICE FROM ALEPPO: “STOP THE LIES!” »
« Trotsky and Ukrainian independence