Who shot Michael Collins and why?

A posting of a Michael Collins photo on Facebook prompted a huge debate (as it always does). This is my contribution:

Well, the question in the Treaty and the Civil War was, what was Ireland’s relations going to be when the war was over? Britain had defeated the Boers in South Africa before the war (1903) and this was the second big test. Sinn Fein under Arthur Griffiths wanted a dual monarchy, had bitterly opposed Larkin and Connolly in the 1913 Lockout and after and had opposed the Easter Rising. They became the leadership of the national struggle by default but Griffiths was ousted by de Valera as president of Sinn Fein and the rebellion as the nation swung left at the 1916 executions.

But Griffiths remained and his politics remained and Collins gravitated to his outlook of subordinating Ireland to the British Empire again.

De Valera opposed the Treaty but weakly, apart from during the Treaty election hustings but on the ground the best of the fighters rejected it out of hand. Ernie O’Malley’s On Another Man’s Wound makes that absolutely clear, nor did he give de Valera’s Document No 2 a second thought. It is clear from his account and from the details that have emerged of the sophisticated military tactics of Tom Barry and his men at (the battle of) Crossbarry that far from being on their last legs they were developing as a powerful military force and the outright defeat of the British forces was now a real possibility.

And surely that was why Britain sued for peace. ‘Terrible war’ and Free State stories about the IRA on its last legs was so much propaganda.

Basically Collins capitulated to Griffiths who was always a supporter of the British Empire, but wanted a little home rule to keep the workers and small farmers in check with a bogus ‘independence’ under the King. 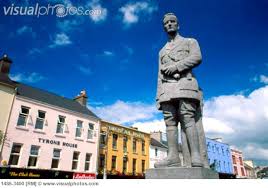 The truly radical forces were the left republicans, Liam Mellows in particular, whose speech during the Treaty Debates is an absolute classic international socialist republican call to arms. It reads as fresh today as the day he delivered it. This was the radical alternative, learned during his enforced exile in America where he met revolutionary socialists of every hue and from his connection with the fledgling Irish Communist Party, led by men like Sean McLoughlin and Roddy Connolly (before he became a TU bureaucrat).

They combined the national liberation struggle with the struggle for socialism, inspired by the Russian Revolution and Mellows took them seriously and issued a manifesto from his cell which made the connection which would inspire the working class and small farmers to fight.

That was why they shot him and his three comrades on 8 December 1922 and others like Erskine Childers and carried out the Kerry Atrocities. Counterrevolution to allow the big Dublin capitalist and the big ranchers to maintain their trade relations with the empire at the expense of the ‘lower orders’.

And that counterrevolution gave us modern Ireland and Michael Collins was its chief architect. Griffiths did not have the authority or respect to accomplish it on his own.

The Ireland of the gombeen man and the slum landlords, the vicious capitalist bastard (William Martin Murphy) and the clerical fascists who gifted us with so much child rape and abuse was made possible by that counterrevolution.

And Collins was not ‘assassinated’ or ‘murdered’, he fell in a Civil War action by the local IRA unit who were defending republican held territory against an enemy convoy

Denis “Sonny” O’Neill Born in 1888 in Timoleague, Co Cork, O’Neill was one of five brothers who were all active during the Tan War and the Civil War. The IRA men were doing their duty in defence of 1916 and its Republic declared there and affirmed in the Second Dáil in 1919. The ambush was a legitimate act of war, not a ‘murder’ or an ‘assassination’.

Denis “Sonny” O’Neill (from Timoleague) shot him with almost the final round of the engagement as they were breaking off and Collins though it was over (“I dropped a man” he reported later). Even if it wasn’t s a fluke shot the local IRA were doing their duty in defence of 1916 and the Republic declared there and affirmed in the Second Dáil in 1919.

Collins and his Free Staters were defending the economic and political interests of the British Empire. Which was why Churchill gave them those big guns to bombard the Four Courts, offering to paint them green to let him know who the real master was. And we now know that the British Army itself, as it made its way to the Dublin docks to leave Ireland, opened up on the Four Courts and secured the surrender, as a final favour to their new neo-colonial Free State servants.