Socialist Fight No. 18 Editorial: A Labour vote is a class vote 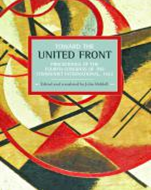 Toward the United Front, Proceedings of the Fourth Congress of the Communist International, 1922, Edited and translated by John Riddell, 2012

A Labour vote is a class vote

Trotsky made his position on the British Labour party very clear in all of his writings,

“for every revolutionary organisation in Britain its attitude to the masses and to the class is almost coincident with its attitude towards the Labour Party, which bases itself on the trade unions”. [1]

Although the policy of the existing left wing of the party was as dire then as it is now,

“The policy of the Opposition in the Labour Party is unspeakably bad. But this only means that it is necessary to counterpose to it inside the Labour Party another, a correct Marxist policy. That isn’t so easy? With this we are entirely in accord: the bureaucracy will not surrender. But the revolutionists, functioning outside…

Is Labour a democracy or an autocracy? »
« ﻿Class consciousness is lodged in workers’ organisations