So the modern world should unite the revolutionary socialism of Karl Marx with the outright fascism of the Ubermensch man Nietzsche, throw in Hegel to confuse everybody and arrive at secret of advancing the academic careers of the declassed perry bourgeoisie who think that maybe Hitler was a bit over the top but that Mussolini had a few sensible things to say. At least he saved us all from that terrible Lenin and Trotsky and the dreaded socialist revolution.

“Lefebvre proposes here that the modern world is at the same time Hegelian in terms of the state; Marxist in terms of the social and society; and Nietzschean in terms of civilization and its values. As early as 1939, Lefebvre pioneered a French reading of Nietzsche that rejected the philosopher’s appropriation by fascism, bringing out the tragic implications of Nietzsche’s proclamation that ‘God is dead’ long before this approach was followed by such later writers as Foucault, Derrida and Deleuze. Forty years later, in the last of his philosophical writings, Lefebvre juxtaposes the contributions of the three great thinkers, in a text whose themes remain surprisingly relevant today.” 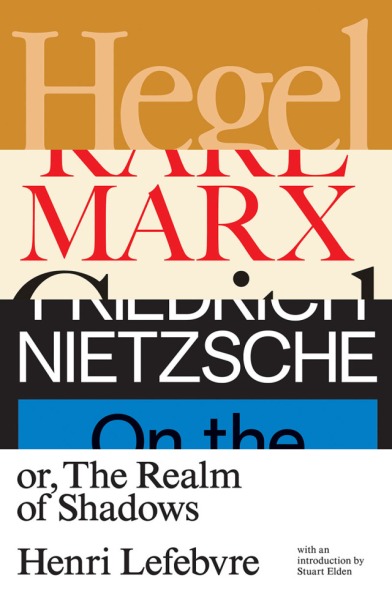 Now out from Verso – and a reminder that if buying from Verso direct it will come with a bundled e-book.

Henri Lefebvre saw Marx as an ‘unavoidable, necessary, but insufficient starting point’, and always insisted on the importance of Hegel to understanding Marx. Metaphilosophy also suggested the significance he ascribed to Nietzsche, in the ‘realm of shadows’ through which philosophy seeks to think the world. Hegel, Marx, Nietzsche: or the Realm of the Shadows proposes that the modern world is, at the same time, Hegelian in terms of the state, Marxist in terms of the social and society and Nietzschean in terms of civilisation and its values. As early as 1939…