Despite my difference with both Jim Denham and Andrew Coats on many other things, this is an excellent article and the correct orientation to the Brexiteers, along the line that Socialist Fight have argued from the beginning of to this brouhaha in 2016:

Trotsky explained the economic and political basis for Lenin and the Bolshevik’s internationalism in opposition to the Stalinist revisionist theory of socialism in a single country in 1929:

“The essence of our epoch lies in this, that the productive forces have definitely outgrown the framework of the national state and have assumed primarily in America and Europe partly continental, partly world proportions. The imperialist war grew out of the contradiction between the productive forces and national boundaries. And the Versailles peace which terminated the war has aggravated this contradiction still further. In other words: thanks to the development of the productive forces capitalism has long ago been unable to exist in a single country. Meanwhile, socialism can and will base itself on far more developed productive forces, otherwise socialism would represent not progress but regression with respect to capitalism. In 1914 I wrote: “If the problem of socialism were compatible with the framework of a national state, it would thereby become compatible with national defence.” The formula Soviet United States of Europe is precisely the political expression of the idea that socialism is impossible in one country. Socialism cannot of course attain its full development even in the limits of a single continent. The Socialist United States of Europe represents the historical slogan which is a stage on the road to the world socialist federation.” [1]

We should call for a Yes vote in the coming in-out referendum on membership of the EU. As socialists and Trotskyists we must ask and answer the question, is it in the interests of the working class and oppressed in Britain and internationally for the UK to remain in the EU or to leave it? That is our sole criterion. We are for a Yes vote primarily because we recognise that socialism in a single country is impossible. Indeed as Trotsky points out above capitalism has long ago become impossible to sustain and develop in a single country and socialism must be built on a far higher level of wealth and productivity. An exit from the EU would inevitably strengthen nationalism and patriotism not only in the British ruling class but also in a big section of the British working class.

Economic nationalism, calling for import controls and the exclusion of immigrants and ‘foreign’ workers, would be enormously strengthened by an exit. This would strengthen the right wing of the Tory party, the United Kingdom Independence party (Ukip) and fascist groups. It would also strengthen the aristocracy of labour, those skilled and privileged sections of workers with relatively good jobs, on whom the trade union bureaucracy essentially rests. As the spokesperson for the trade union bureaucracy and primary ideologue of and defender of this layer of workers the Communist Party of Britain (CPB) and their mouthpiece, The Morning Star (MS) are the foremost ideological advocates of exit from Europe in the labour movement 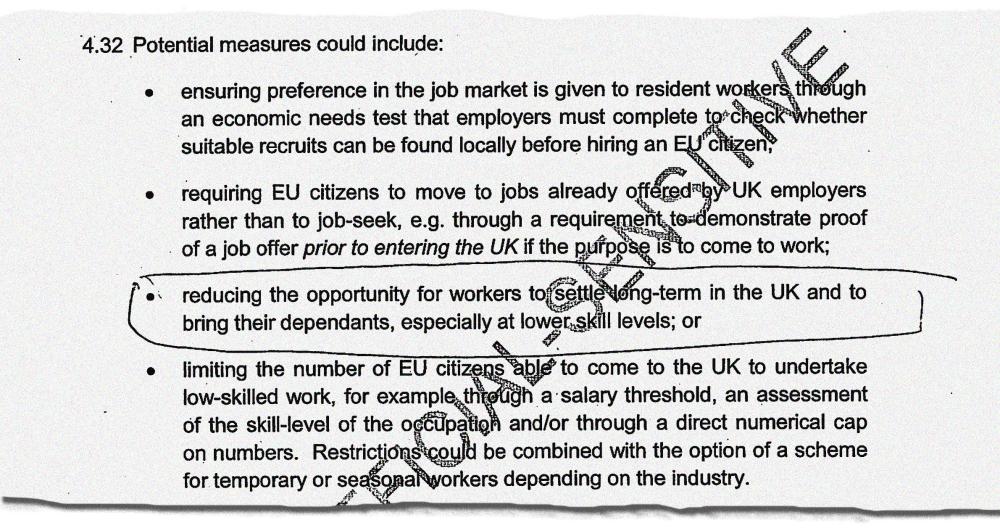 Above: the leaked Tory plans

Yes, I mean you lot at the Morning Star/CPB, SWP, Counterfire and Socialist Party:

I take it for granted that as self-proclaimed leftists, you are knee-jerk anti-racists and internationalists opposed to anything that tends to divide, rather than unite, our class.

And yet you called for a Leave vote in the referendum, and continue to back Brexit! In the case of the Morning Star/CPB, you oppose continued membership of the single market and customs union – in other words you want a “hard” Brexit!

To its shame, the Morning Star continues with this folly, publishing Daily Mail-style editorials that more or less explicitly back David Davis against the “intransigent” Michel Barnier and the “EU bosses in Brussels, Bonn and Frankfurt.”

What is anti-Semitism? Can Jewish people, whether Zionist or anti-Zionist, be anti-Semitic? »
« Centrism confronted by Trotskyism at Communist University

One thought on “Open letter to the deluded pro-Brexit “left””