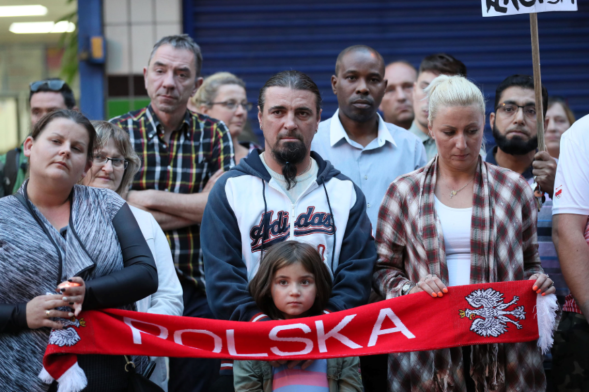 A vigil to pay tribute to Arkadiusz Jozwik, a Polish man murdered by racists in Harlow, Essex on 31/8/ 2016.

Socialists and supporters of workers’ rights, in the Labour Party and outside, have to make a leap of our understanding and realise that migrant workers’ rights ARE workers’ rights. We should oppose Brexit and defend free movement and migration for workers within the EU. This is not out of any antipathy for workers from outside the EU; we demand the same rights for them. But socialists should demand Brexit be cancelled to defend free movement against reactionary attack from little England chauvinists, including those who claim to be on the left and support so-called ‘Lexit’.

One positive effect of migration is that it brings into existence, despite all the strains, an international working class, not as an abstraction, but as a material reality. That has always been true of capitalism. In an earlier period, by drawing into the cities and industry enormous numbers of former poor peasants, it created its potential gravedigger. This is also true of migration: and it is why all kinds of reactionary backward –looking nationalists hate migrant workers.

We do not endorse the EU’s single market for labour and capital, just as we do not endorse capitalist markets in general.  But just as much as the right to join trade unions, to strike and struggle for better wages and conditions, so the right to seek work, where the best conditions are available, is also indivisible for workers. We are opposed to all restrictions on this, including chauvinist ones that purport to benefit one section of the working class (‘indigenous’) workers against another migrant section.

To say otherwise is to poison the relations between workers with different origins, and destroy class solidarity domestically and internationally. Such chauvinism encourages different groups of workers to scab on each other’s struggles.

We totally oppose the neo-liberalism of the bourgeois opponents of Brexit, and of the EU itself.  The most dramatic expression of this was the punishment of the Greek working people for resisting the austerity programme of the EU, whose purpose was to prop up the Euro as the centrepiece of the current EU project – a rickety monetary union without merging the states and economies of the components of the EU.

But we are against the break-up of the EU along national lines, between British, French, German, Italian imperialisms etc. We demand the destruction of all these separate imperialist entities and the creation through workers’ mass struggles for a United States of Europe, which to really succeed would have to be under the rule of the working class.

We demand a full fiscal union to complement the monetary union, writing off Greek and other debts of poorer nations, which would hence be aided economically as regions, and a democratic union where it is the working class, not unelected bureaucrats (who are in fact agents of the European imperialists and their super-rich elites), who control and own the productive forces of a united continent.

After the vote for Brexit in 2016, there was an escalation of racist and chauvinist attacks. Polish and East European workers were the targets: leaflets were pushed through doors threatening ‘Polish vermin’.  Polish cultural centres were daubed with racist graffiti, and there were violent attacks, and even disgusting murders of East Europeans.

Black and Asian people were abused and threatened and told to ‘go home’. These incidents were a small fraction of what has been happening. Many victims of abuse and violent racial crime do not report such incidents because of justified distrust of the police and the legal system.

Over a third (34%) of Black, Asian or minority ethnic people (BAME) witnessed or experienced racial abuse in the seven months following the Brexit vote in June 2016, a TUC poll has found.

The ICM/TUC poll of over 1,000 BAME working adults also found that since the referendum:

The poll is part of a major TUC project to combat racism in the workplace, which will document the British BAME experience of racism and harassment, and set out ways to tackle it.

This racial abuse and violence can be put at the door of the bourgeois politicians on both sides of the referendum. The entire thrust of Johnson, Gove and Farage’s ‘Leave’ campaigning was whipping up hatred of migrants; but many on the ‘Remain’ side were no better, endorsing fortress Europe racism against non-EU migrant workers and demands for an ‘emergency brake’, agreeing that migrants are to be treated as an enemy population. They cringed in the face of anti-immigrant populism that has gained much influence in British society because of the relative absence of working class politics for more than two decades.

Syrian and Middle Eastern refugees too were targets for the Brexiters as they banged the drum against those fleeing the wars the West and the Israelis have waged in the Middle East. These wars destroyed Iraq and Libya and continue to destabilise Syria in pursuit of creating anarchy, social collapse and fragmentation of the Arab world in particular. This is not only aimed at asserting US global hegemony but also at preventing any Arab unification that may threaten Israel’s ability to seize Arab land with impunity.

British national sentiment does not contain any justification or a struggle against oppression, as does Palestinian, Irish or Latin American nationalism. It is reactionary pure and simple – Marxists do not support the ‘right’ of British chauvinists, even those with ties to the labour movement, to exclude or restrict migrants from British soil.

Working class support for labour protectionism helps capital to divide the working class along national lines and severely damages the possibility of international solidarity. And since capitalism has become more and more internationalised for many decades, and the IT revolution in the more recent decades has made capital flight qualitatively easier, international solidarity is going to be a crucial weapon even in defensive struggles in many countries, both imperialist and semi-colonial, in the future. Without it, the working class will suffer more very damaging defeats.

The labour movement should have no truck with labour protectionism, but should adopt as its own the slogan:

“Prevent” is trying to censor the left: Is the SWP joining in? »
« The anti-imperialist united front: a debate with the GOR