The Fourth International and the crisis of revolutionary leadership

The long boom of the post-war capitalism held back revolutionary developments in the imperialist countries. Unable or unwilling to theoretically rearm themselves, the organisations descended from the Trotskyist tradition entered a deep political crisis. Many of those forces which had expected an ‘automatic’ collapse of capitalism rapidly became demoralised.

Others became sects, ignoring reality and preaching – for decades – the imminence of revolution (SLL / WRP in Britain and the OCI / PCI in France). Still others developed theories rationalising the boom and believing that capitalism had overcome its contradictions – the theories of state monopoly capitalism (Stalinism), neo-capitalism (the United Secretariat) and the permanent arms economy (the British IS / SWP).

Only those who link their day-to-day activity with the ultimate socialist goal through a system of transitional demands will be able to mobilise and politically prepare the working class to act as the conscious agent of socialist revolution. To reject such a method inevitably means a relapse into the old social democratic division between minimum and maximum programme and retreat into opportunism and/or sectarian propagandism – or both.

The objective development of the social revolution continues even during periods of relative social peace. The exploitation of the working class, the existence of unemployment and hunger on a massive scale, the oppression of women, of racial, national and other minorities, the threat of war and the destruction of the environment are fundamental to capitalism, even during periods of boom.

Even in the advanced capitalist countries, every apparent social advance is paid for in suffering and misery. The development of capitalism forces it to attack even the limited gains workers have made. In the world system of capitalism, development of particular countries has only been possible through the maintenance of backwardness in the continents of Latin America, Asia and Africa. This has created an unevenness within the world proletariat, which can only be overcome – in both political and economic terms – by revolutionary internationalism.

Socialism remains the only solution for the international working class and oppressed of the planet. The attempt by the bureaucracies in the workers’ movement in the capitalist countries to limit all struggles to reforms leads not to a generalised steady advance; on the contrary, it leads to an assault on the reforms and rights workers have won in the past. This is the common experience of workers in the imperialist, semi-colonial and colonial countries. In many semi-colonial countries and in the workers’ states the prospect of improved living standards on the part of the masses has all but disappeared. The unleashing of the ‘free market’ upon Eastern Europe, the Soviet Union, China, Vietnam and Laos underlines the urgency with which the first steps toward resolving the international crisis of working class leadership must be taken.

The degeneration of the Fourth International

Stalinism triumphed over the Left Opposition both in the Soviet Union and in the Comintern. The demoralising effect of defeat upon the international working class, and the consequent revival of social democratic fortunes created extremely unfavourable conditions for the struggle of the Trotskyists. Nevertheless, the Left Opposition represented the continuity of genuine Bolshevism and trained the cadres with which a new Fourth International would be built. The great achievement of the founding congress of the Fourth International, despite the numerical weakness of the forces it represented, was to systematize a programme of transitional demands – fulfilling the task set by the third and fourth congresses of the Comintern.

The closing stages of the Second World War saw a deep radicalisation of the masses – in France, Italy, Britain, Belgium, Greece, the United States, in Eastern Europe and in other countries – leading to pre-revolutionary and revolutionary situations in some instances. Maurice Thorez in France and Stalinists in eight other European countries entered popular front governments to save capitalism. Stalinism betrayed these immediate challenges, which reached their high points in Italy, Greece and Vietnam. CPI leader Palmiro Togliatti issued his infamous broadcasts from Moscow and then when he returned in 1944 he implemented the Salerno Turn (Svolta di Salerno) away from socialist revolution whilst armed partisans, PCI and others, were in control of almost all the cities of northern Italy. 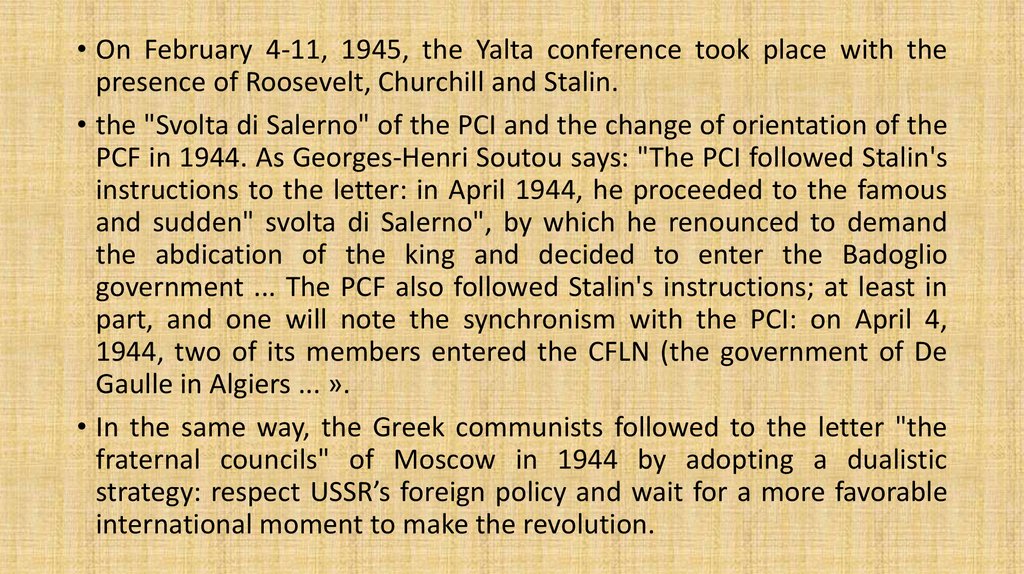 The instructions came straight from Stalin himself, relayed via Togliatti; the CPI entered the government of the fascist Pietro Badoglio, 2nd Duke of Addis Ababa, who led the invasion of Ethiopia in 1936. This ‘government of national unity’ committed the PCI to “support democracy” and to abandon the armed struggle for the cause of socialism. This meant the disarmament of those members of the Italian resistance movement that had been organized by the PCI (the Garibaldi Brigades). Togliatti became Deputy Prime Minister in December 1944 and then from June 1945 Justice Minister. He voted to incorporate Mussolini’s 1929 Lateran Pacts with the Pope into the constitution; he thus betrayed the Italian revolution. Of course, when the revolutionary situations were defeated the Stalinists had served their purpose in those nine European countries and they were unceremoniously ejected from those government when the US extended Marshall Aid to those countries from 1947 and the Cold War began.

Stalin’s percentage agreement consigned Greece to capitalism, the KKE led by Zachariadis chose Stalin and class compromise over Tito and the armed struggle. The Greek Stalinists murdered Titoists and claimed to have murdered 800 Trotskyists. The Kremlin watched in silent approval as the British and US armies massacred the revolution. The colonial masses in Indo-China, India, Ceylon and Algeria surged forward. Despite its leading role in this political defeat of the European working class, Stalinism’s prestige and strength were greatly enhanced by the defeat of Nazi Germany and by the Soviet occupation of Eastern Europe. The revolutionary movement of the masses in the colonial countries was contained and betrayed by bourgeois nationalism, supported by Stalinism. Ho Chi Mihn savagely put down the Vietnam revolution, murdered the great Trotskyist leader Tạ Thu Thâu and welcomed back the British and French troops on the instructions of Stalin and the PCF.

America fought WWII not just to defeat the economic model of Nazi Germany or the workers’ state-planned economy of the USSR or that of the colonial empires of old Europe, Britain and France but to overcome all opponents of the free market. They sought to impose their neo-liberal agenda on the whole world after the war, whilst exempting themselves as Britain did in the last globalised economy in the nineteenth century, because theirs was the most powerful and efficient economy based on Taylorism and Fordism and they had the best military. But they encountered problems. The world was bi-polar after WWII because the USSR had triumphed over Nazi Germany and the war had given a powerful impulse to revolutionary forces everywhere.

The genuine enthusiasm with which Trotskyists applied themselves to re-establishing the Fourth International at the end of the war was undermined by the increasingly false perspective developed in relation to the post-war world. In place of a sober analysis of the emerging boom and the expansion of Stalinism, the leaders of the Fourth International sought to make reality conform to Trotsky’s pre-war prognoses. Together with the questionable methods with which the FI was rebuilt after the war, this disorientation marks the beginning of a rapid process of degeneration.

From denying the possibility of Stalinism overturning capitalist property relations, the great majority of the FI’s leading cadre moved over to an accommodation and finally a capitulation to Stalinism, from the adulation of Tito in 1948 to the Third World Congress in 1951. The Trotskyist movements in Vietnam and China were betrayed by the international leadership and those in Ceylon and Bolivia misled, with the result that revolutionary opportunities were missed. In countries such as Britain which lacked a large Stalinist movement, a parallel liquidation into social democracy took place.

The discussion document drafted and adopted by the Workers Socialist League for submission to the discussion prior to the XIth World Congress of the United Secretariat of the Fourth International. It was a good document but none from the old WSL defend it today.

Well before the split of 1953, the FI had ceased to be a consistent revolutionary movement. The outcome of the 1953 split between the IS of Pablo and Mandel and the IC of Cannon, Healy and Lambert was two centrist currents, neither of which was capable of honestly assessing – still less correcting – the post-war crisis of the FI, the abandonment of Trotsky’s programme and the failure to meet the political challenge of the world after 1945. These two centrist currents were dominated by European or North American leaderships which consistently demonstrated their political bankruptcy by failing to provide revolutionary internationalist leadership, not least in the cases of the revolutionary crisis on Latin America, Asia and Africa (e.g. Bolivia in 1952, Ceylon in 1953, Vietnam in the 1970s and South Africa in 1976).

However, it was still necessary to give unconditional but critical support to the International Committee (ICFI) against the International Sectariat (ISFI/USFI) in the 1953 split, because at least it defended elements of the Trotskyist programme, albeit in an ultra-left sectarian way that hid its own former capitulation and its ongoing lack of political clarity on the nature of “Pabloism”. By the Iranian Revolution of 1979 both the ICFI and the USFI had similar position of capitulation to the Ayatollah Khomeini, who was supposed to be objectively advancing the cause of the world revolution despite his absolute determination to do no such thing. The Fourth International needs to be reformed with this understanding