The Butcher of Marikana – The next President of South Africa? 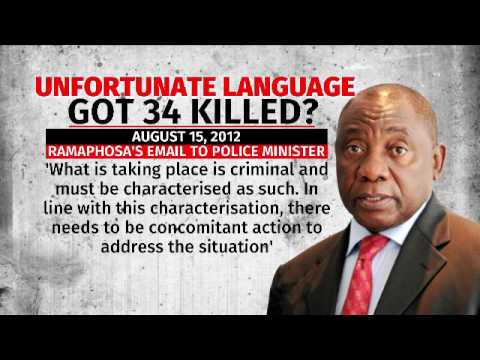 On the 18th December 2017, amid allegations of vote rigging and bribery, Cyril Ramaphosa (CR) a lawyer and former leader of the National Mineworkers Union (NUM) was elected President of the ANC.  It was a close vote and there was a recount. Ramaphosa sits on the boards of various corporations, (positions of corporate power attracts the worst kinds of human beings).

He is one of the 14 wealthiest people in South Africa, a country with obscene levels of inequality, in fact, one of the most unequal countries in the world. Not surprisingly, CR was the preferred candidate of business, and the money markets responded positively to his election success.

His election is more than a little disturbing, given that CR was deeply implicated in the Marikana Massacre 2012, where 34 mineworkers were murdered in cold blood by the South African police while they were trying to disperse.

It is widely believed, and there is email evidence, that Ramaphosa gave the green light for that Massacre.  Nevertheless, the TRUTH, was suppressed and CR violated the victims’ dignity by repeated denial of the facts and against all the evidence, claimed that the victims were in reality, the real culprits!! His refusal to accept any blame and the self-serving drivel he presented, shredded any credibility he had left.

The so-called Commission of Inquiry spat on the graves of those murdered by exculpating the perpetrators from guilt.

Although the elections are not until 2019, CR has effectively already started campaigning for the position of President of S. Africa. With his unique ability to fake sincerity, he claims that he will ‘root out corruption’ etc. A problematic line of thought has arisen in political discourse in South Africa, which wants to blame Zuma and only Zuma for the ANC’s descent into a kleptocracy. Historical truth has to be defended, the ANC became corrupted very early on when they first took power and made their deal with imperialism.

They sold out long ago, they got away with it, by reframing the narrative, from socio-economic justice for ALL, to having a few Black multi-millionaires and billionaires like Cyril. That was what Black Economic Empowerment was all about. Capitalism cannot be reformed, it must be removed, and be replaced by a system in which hierarchy and inequality (economic, political, social, racial) are abolished.  What was needed is a policy of taking the enormous privilege and wealth from the tiny minority that has it. Without doing this no country can pursue a programme of social/economic equality. The State is a criminal entity and the current political system will only produce more criminal behaviour.

After the oppression and mismanagement of the settler regime, the indigenous autocrats were more than willing to allow the West to continue plundering the resources in the name of ‘industrialisation’ and ‘development’.

Politics should not be a means of acquiring personal wealth, no Rep./MP should be paid more than an average skilled worker’s wage. They should be subject to immediate recall and should serve no more than 3 years.

Corruption is both widespread and endemic in South Africa, (as in most capitalist countries) and Cyril’s so-called criticism of ‘corruption’ is a mixture of hypocrisy and deceit. Never has CR chosen principle over financial advantage. The state survives on the blood of the poor.

A British PR firm Bell Pottinger was expelled from the National PR regulatory body after an investigation into its work on behalf of the ‘Too rich to Jail’ Guptas. Bell Pottinger collapsed shortly after. An International Law Firm Hogan Lovells, accused of a cover-up for the South African Revenue Service has been referred to the Solicitor’s Regulation Authority for disciplinary action to be taken against them, including withdrawal of permission to practice as Solicitors. Capitalist financial apparatus is so vast and well organised, that its sheer size and complexity tax the intellect of the average person to comprehend its reach.

CR is spreading illusions about the system, he is proposing the same bogus trickledown economics we have heard over the years.

He is using pseudo-socialist rhetoric to sound revolutionary’. CR claims he will create ‘Jobs and Housing’. He said the ANC policy of ‘free tertiary education’ for families earning less than R350,000 will be implemented… but gradually… (How long is ‘gradually’?)

He said Land Redistribution will be implemented but WITH compensation…where will CR get the money to pay the settlers for the land? Guess there won’t be any land redistribution soon. He said ‘factions’ will no longer be tolerated in the ANC. Where was Cyril for the last 20 years? Why is he only now pretending to address these issues?

The prosperity he is proposing cannot manifest. Capitalism is in a global crisis, they must loot from others or create destruction in general. South Africa needs a Worker’s Party to mount a revolutionary challenge to Capitalist hegemony.

The National Union of Metalworkers of South Africa said that they would form a Worker’s Party after they broke with the too corrupt to exist COSATU, but they have said nothing since then. The South African Working Class must continue the class struggle, continue their Strikes, Occupations, and Protests …RESIST, RESIST, RESIST

ZIMBABWE CRISIS »
« Healthcare in Britain the USA and Cuba Compared

One thought on “The Butcher of Marikana – The next President of South Africa?”