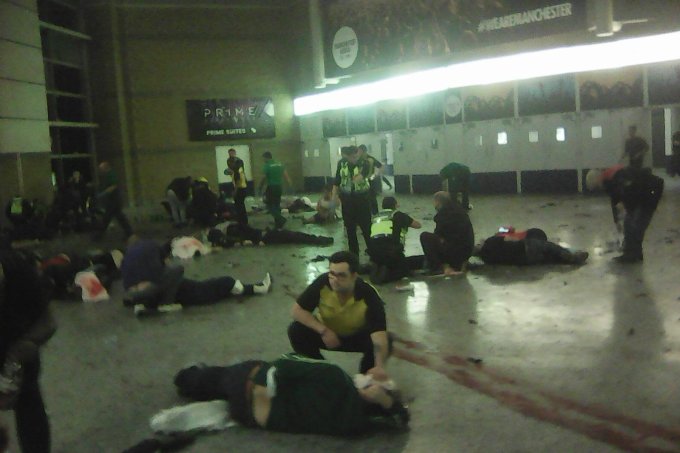 Injured concertgoers and police officers inside the Manchester Arena after an explosion near the end of the Ariana Grande concert. Credit Press Association, via Associated Press

The recent articles by John Pilger and others reveal clearly that the circumstances surrounding this atrocity have been concealed from the public.

The articles make a convincing case that ordinary people in this country have been put at risk by the destructive policies of the US/Nato led alliance in destabilising and destroying countries who stand in the way of their drive to control and exploit the oil and gas resources of the region.

To this end they have turned their attention to destroying the secular regimes, which are the most able to withstand their attacks, and encouraged and nurtured the most reactionary elements in Middle Eastern society. These reactionary elements have been instrumental in creating incidents which are then used as a pretext for the “humanitarian interventions” which have so devastated the region. Here is BS report ‘s blogsite:-

‘No intervention’ by our intelligence agencies, we now know, was not strictly true, of course, because thanks to an explosive Middle East Eye article published last Thursday we see it was exactly the kind of ‘intervention’ voters should have knowledge of before attempting to judge how fit Theresa May is to run their country, especially in the context of the cynical and corrosive Tory characterisation of Corbyn as a ‘terrorist sympathiser’. MEE revealed the full extent of MI6/MI5 collusion with members of the proscribed terrorist group, LIFG (Libyan Islamic Fighting Group), carrying interviews with sources who stated that in 2011 their control orders were lifted and ‘within days’ their passports returned. This, conveniently, just as the scheme to remove Gaddafi was heating up – one source reveals he was even asked by an MI5 officer, ‘are you willing to go into battle?’

This policy has continued to this day and the target now is of course Syria since Libya has been all but destroyed as a nation and used as a corridor for the plunder of sub Saharan Africa. Here Pilger:-

‘Having plundered Libya’s $30 billion arsenal, the “rebels” advanced south, terrorising towns and villages. Crossing into sub-Saharan Mali, they destroyed that country’s fragile stability. The ever-eager French sent planes and troops to their former colony “to fight al-Qaida”, or the menace they had helped create.

On 14 October 2011, President Obama announced he was sending special forces troops to Uganda to join the civil war there. In the next few months, US combat troops were sent to South Sudan, Congo and the Central African Republic. With Libya secured, an American invasion of the African continent was under way, largely unreported.’

The slaughter and plunder continue unabated to this day, most particularly in Syria and Yemen, and the use of reactionary mercenaries with it. Again from Pilger:-

‘The spin is back, not surprisingly. Salman Abedi acted alone. He was a petty criminal, no more. The extensive network revealed last week by the American leak has vanished.  But the questions have not.’

Why was Abedi able to travel freely through Europe to Libya and back to Manchester only days before he committed his terrible crime? Was Theresa May told by MI5 that the FBI had tracked him as part of an Islamic cell planning to attack a “political target” in Britain?

Gaddafi in November 2010: The “LIFG (Libyan Islamic Fighting Group), carrying interviews with sources who stated that in 2011 their control orders were lifted and ‘within days’ their passports returned.” – The Manchester suicide bomber Salman Abedi was an MI5 ‘asset’; “This policy has continued to this day and the target now is of course Syria since Libya has been all but destroyed as a nation and used as a corridor for the plunder of sub Saharan Africa”.

This is compelling evidence that ordinary people have been put at grave risk in this country by the actions of the powers that be in providing safe havens for reactionary mercenaries in peaceful law-abiding communities. Neighbours and even family members of the bombing suspect warned about him but were ignored. This is, at the very least, criminal neglect of the safety of ordinary people.

The attack on London Bridge shows further evidence of the same dreadful pattern.

Corbyn was absolutely correct to point out the link between British, European and US foreign policy and the Manchester and London attacks, but the Labour party now needs to go further. It should call for a full public inquiry into these atrocities and commit that a future Labour government would put an end to secret manoeuvrings and warmongering, in the Middle East and anywhere else.

For a full public inquiry into these atrocities!

End the US/NATO led destruction of the Middle East!

One thought on “Manchester Bombing and London Bridge/Borough Market Atrocity”