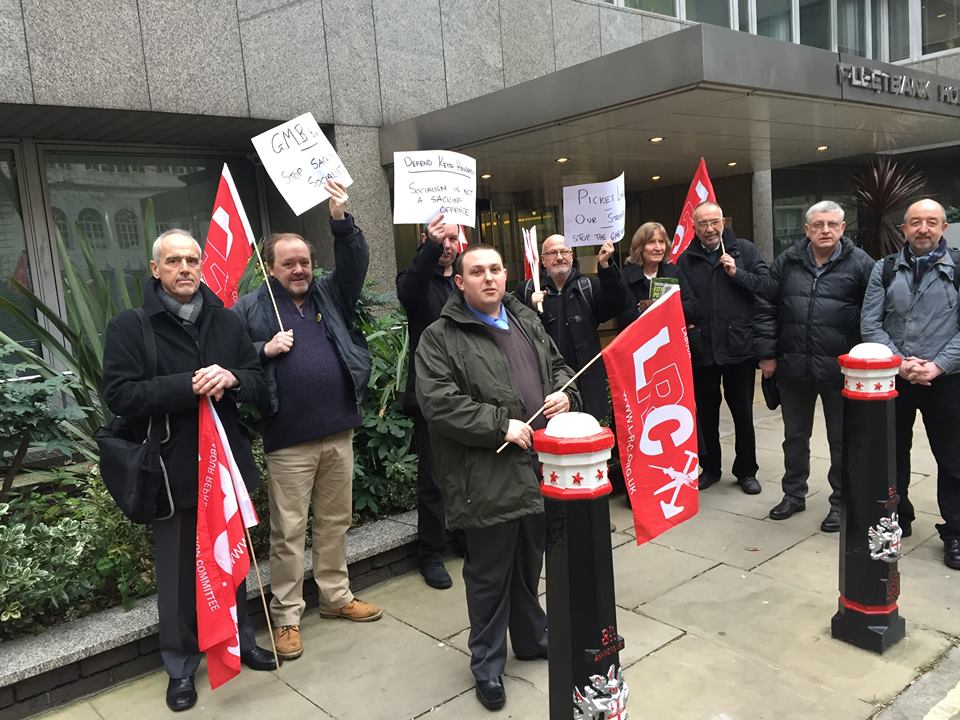 All serious rank and file socialists supported Keith Henderson in his battles against  the GMB bureaucracy in the past.

No to all immigration controls: Keith Henderson must apologize for his slurs on Ian Allinson

The allegations on Facebook by Keith Henderson, that Ian Allinson is backed by the establishment or they will be assisting him in any way is despicable, presumable by even mentioning that there is a third party in the election. Up to now there has been an orchestrated campaign to portray the race as one between McCluskey and Coyne with their preference for Coyne very plain. Keith Henderson posted:

“The right wing candidate Gerard Coyne would not stand a chance in a straight fight which is why it is vital for the establishment to have a candidate who will split the left vote.”

The very opposite is the truth. If we don’t have a rank and file candidate clearly fighting for the membership, just as Keith claimed to be doing in the GMB and when all serious rank and file socialists supported him, then Gerard Coyne will hoover up all the membership’s exasperation with McCluskey’s inaction and he might well win.

If McCkuskey is reckoned a ‘left’ candidate then the vote in 2010 was 64% left, a direct result of Hicks’ candidacy, a result confirmed by the 2013 election. He did not “split the vote” in 2010 but came close to inflicting a huge blow on the trade union bureaucracy on behalf of  the membership in 2013.

That was the lesson of the three Unite General Election candidacy of Jerry Hicks. On each occasion he exposed the bureaucracy and mobilized the membership and knocked the right wingers into a distant third by clarifying the issues in the campaign for the membership. Ian Allinson is doing so in the election, backed enthusiastically by Jerry Hicks.

This as a very disappointing political collapse by Keith Henderson, backing not only McCluskey but the whole United Left slate. You speak of critical support but here your line is totally uncritical collapse before that bureaucracy. Because as you explain above any criticism of McCluskey is support for the establishment. So, it is the duty of all serious socialists and militants to remain silent on McCluskey’s record and present political orientation?

Since the 2008 crisis broke the trade union and Labour party bureaucracies have sought at every turn to impose wage cuts and redundancies, have collaborated in the destruction of the welfare state with only the most feeble and tokenistic opposition. When the half a million strong TUC demonstration against austerity in March 2011 Len McCluskey, the ‘left’ leader of Unite the union, the biggest in Britain, sent his stewards out with high visibility vests bearing the slogan, “cuts too far, too fast”; in other words, the “austerity lite” programme of Labour leader Ed Miliband that cost us the 2010 election. Now is our chance to reverse that disastrous course, this is why those comrades flooded in to vote for Corbyn in September 2015 and this is why they are flooding in now, swelling its membership to 600,000. And if we are to put the fight against austerity into practice we must vote in this election for Ian Allinson and for those Executive candidates who stand on a clear rank and file slate.

And McCluskey’s current shameful support for immigration controls is  in line with Andy Burnham and Gerard Coyne. So, it’s immigrant now who are to blame and not capitalism and the bosses, is it Keith?

Ian Allinson is the only General Secretary candidate to come out clearly and fearlessly against immigration controls. In his election appeal Ian points out these policies are a direct attack on Corby’s position:

SUPPORT GOLAM BHUIYAN FOR THE  BAEM SEAT ON THE EXECUTIVE

Golam Bhuiyan also is standing for the Executive for BAEM seat also on a very clear line opposing immigration controls. Here is his election appeal:

This election comes at a defining moment for BAEM working people in this country following the nasty argument “British Jobs For British Workers”-  a slogan promoted to stoke a divisive racism and nationalism.

It’s the migrant nurses and doctors who come here filling the gaps left by politicians who have failed to invest in training, it’s a Tory government that has failed to build homes, it’s the exploitative employers and the politicians who deregulate the labour market.

I am running this election to put an end to the fudge and come out clearly for free movement of workers, and against any rules that treat workers differently based on their nationality and ethnicity. I’ve been a workplace activist for 15 years at BAA Heathrow Airport and UK Civil Service building up the union. For ten years, I served as Shop Steward and currently I’m the Branch Equality Officer for Unite Civil Service Branch.

Like me, BAEM working class people must not be the “price” for access to the EU single market. This point implies that instead of workers’ freedom to travel and work being vital, they are a necessary evil, whereas the free market is a desirable goal. In reality it is free market neoliberalism, not free movement of workers, which has been destroying our lives in recent decades.

Our best chance of defending our jobs, pensions and services is united resistance.  That means unity of public sector and private sector, young and old, men and women, employed and unemployed, students and pensioners. That means standing up against any attempt to divert anger against scapegoats, be that through nationalism, racism or homophobia.

UNITE needs to be at the heart of a coalition of resistance standing up to the onslaught from employers and the government. We also need change in our own union, and Clearly the members are the union, but the activists (reps, stewards, branch officers etc) are the heart of the union.  Now it’s the time to reclaim back our union for it’s members.

We need change in UNITE’s culture and structures to inspire and involve more people, especially

We can’t afford more of the same. We deserve better, we need a radical change in direction, and that’s what I’m offering.

I would like your support in securing my nomination for BAEM seat and between Monday 16 January – Friday 17 February 2017, your Branch can endorsed my name. Finally, please cast your vote or ask your BAEM brothers and sisters to vote for me.

Email Golam for his other details for nomination purposes:

These slurs on Ian Allinson must to be withdrawn and you must apologize to him for them, Keith Henderson.