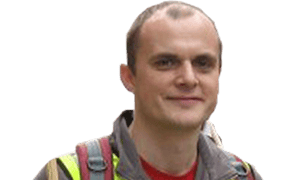 Workers must stand together – free trade is the problem, not free movement, Ian Allinson, https://www.theguardian.com/profile/ian-allison

On Thursday 15 December Ian Allinson declared his candidature for Unite General Secretary. The Grass Roots Left declares its unconditional support for Ian because he is the only rank and file candidate. Having supported Jerry Hicks when he stood on a rank and file platform in 2010 and 2013 we are absolutely certain that only a candidate who stands for the membership should be supported, he is the “grass roots socialist challenge” in his own words. Moreover, he is the only workplace-based candidate who holds a very important union office as his declaration says:

“I’ve been a workplace activist for 25 years at Fujitsu, building up the union in a largely un-organised industry. I led the first national strike in my industry in 2009-10. For ten years, I served on the union’s executive before stepping down in 2014. I’m chair of Unite’s UK combine in Fujitsu, where my own workplace is currently in dispute and taking strike action over pay, pensions and job security. Nationally we’re fighting against job cuts from automation and offshoring.”

It was very heartening to see Jeremy Corbyn elected as Labour leader for the second time against the machinations of the coup plotters but the essence of both Corbyn surges in 2015 and 2016 was anti-austerity. And unless we begin to deliver on that the great danger is that this movement, which has taken the Labour party membership to some 650,000, the highest since the early 1950s, will become demoralised and die. And that is why Ian’s candidature comes at just the right time and, as he is located in a militant workplace, which supplies that vital missing ingredient; class struggle militancy to complement the political advances in the Labour party. Without both wings of the labour movement fighting together we cannot begin to turn the tide against austerity. Neither wing can succeed on its own. 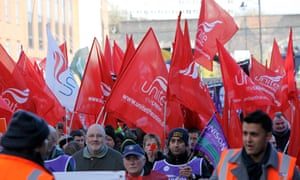 Public sector workers march in Birmingham in 2011: ‘We, Unite’s membership, like the working class as a whole, come from all over the world. This is a strength, not a weakness.’ Photograph: Alamy Stock Photo

“Despite some progress during Len McCluskey’s time as General Secretary, our union is still falling far short of an adequate response to the onslaught members are facing from government, local authorities and employers.”

Moreover, on the day following Ian’s declaration, 16 December, McCluskey wrote a piece in The Huffington Post which was a massive capitulation to the Tories, to New Labour and their right wing candidate, Gerrard Coyne: “Unions understand that workers have always done best when the labour supply is controlled and communities are stable. While we must reject any form of racism, and help refugees fleeing war, we must also listen to the concerns of working people. They understand that the free movement of labour means downward pressure on wages, in some sectors at least.”

It is no coincidence that on that very same day, 16 December, The Guardian carried a piece by Andy Burnham saying the same thing:

“But the test will be whether the changes to free movement meet public concerns. We need to be ready to re-examine long-held positions. Somewhere along the way, the European left became the champion of an unfettered, free market approach to the movement of goods, capital and people. We failed to see the impact of these policies on people who had suffered the effects of deindustrialisation, and on widening inequality.”

As Ian points out these policies are a direct attack on Corby’s position:

It is common knowledge that it was Unite’s Executive that thwarted McCluskey’s attempt to back Burnham and not Corbyn. As Ian says in a comment below his declaration: “I was supporting Corbyn while McCluskey was still dithering around supporting Burnham.”

On every other issue too Ian takes the rank and file position of the backing the interests of the whole working class and not just a temporary mood of a section on import control or Trident jobs which would be great damage to the long-term unity of the whole class in Britain and internationally. He stands closest to the Grass Roots Left in all aspects of his platform.

The GRL stands on: