Picket of the Irish Embassy, Thursday, 5th September 3.30 to 4.30: For Political Status for Irish Republican Prisoners! Implement the August 2010 Agreement in Maghaberry! 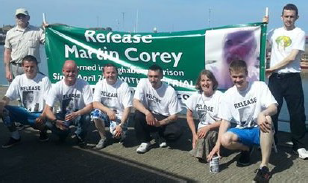 Martin Corey is a Republican from Lur- gan, Co. Armagh. He was sentenced to Life Imprisonment in December 1973. At that time he was only 19 years old. He was to spend the next 19 years of his life in jail until he was finally released without signing anything in June 1992. On April 16th 2010 he was taken back into custody. No Reason was given to Martin at the time or since his return to jail. As an Irish Republican Martin Corey believes in the right of the Irish people to the ownership of Ireland, he believes Ireland and her people have a right to practice unheeded their own independence. Is this why Martin was interned? When did it become a crime? Was it with the signing of the Belfast Agreement (GFA), is this the new start, the new beginning we were all promised? The reality on the ground is that not much has changed and so it becomes obvious that Martin Corey is being held Hostage by the British Government because of his Political Beliefs, all those who believe in justice and equality must support this campaign. If you would like any further information please contact: releasemartincorey@gmail.com

The August 2010 Agreement
The August 2010 Agreement contained the following on strip searching: D. Full body searching 1. No random full body searching will take place on the way to domestic and legal visits and the videolink or from the SSU. 2. No “rubdown” searching internally, within Roe 3 and 4. 3. NIPS will introduce a new search facil- ity and revised search policy for separated prisoners. The new facility will be located within the Bush and Roe complex and subject to CCTV and audio coverage. It will incorporate a combination of the lat- est technologies which will remove the requirement for routine full-body search- ing of separated prisoners within the prison. The search process for all sepa- rated prisoners entering the separated complex will be: outer clothing, metal objects, belts and shoes removed and passed through scanner; all prisoners undergo scanning by hand held metal de- tector; all prisoners undergo thorough rub-down search; and prisoners required to sit on BOSS chair. The screws at Maghaberry simply refused to comply with this Agreement, citing their authority as higher than the Prison Governor and emanating from the Secret Services. No one has the political will to force them to comply! 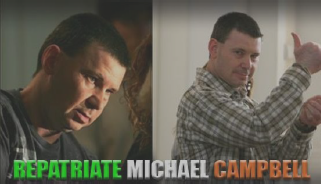 An Irishman who is appealing his imprison- ment in Lithuania for plotting to smuggle arms to the Real IRA paramilitary group on Friday insisted he had been framed by British intelligence. “I have never been a member of Real IRA or helped them any way, ”40-year-old Mi- chael Campbell said about the hardline splinter group of the IRA, once the main armed group opposed to British rule in Northern Ireland.Campbell spoke at the final hearing of his appeal against his 12-year jail sentence. The appeals court in the Lithuanian capital Vil- nius said it would issue a verdict on October 2. Campbell said there was no evidence to confirm the testimony of a main prosecution witness identified in court as a smuggler and British agent. “This whole case is built on the illegal activity of (the British intelligence agency) MI5,” he said.He also claimed he was persecuted because of family ties. His brother Liam was one of four Real IRA leaders found liable by a civil court for a 1998 bombing in Omagh, Northern Ireland that killed 29 people. Sinn Fein lawmaker Martin Ferris told reporters they came on the request of Camp- bell’s family, adding they were concerned about poor detention conditions. Copyright AFP, 2013. 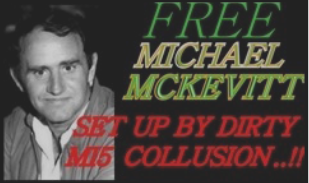 Republican Network for Unity Dundalk deplore the decision of the 26 county Ap- peals court: not to declare a miscarriage of justice in the case of Michael McKevitt. Once again Michael McKevitt and his fam- ily have been denied any semblance of jus- tice, this man is now entering his 12th year of imprisonment, he was convicted on the word of David Rupert an agent and con- victed fraudster, in the pay of MI5, FBI and in all probability also in the employment of the 26 county intelligence services.

Michael McKevitt was tried and convicted in the media long before he appeared before the special criminal court, he was arrested on a warrant that has now been ruled unlaw- ful but not in Michael’s case, Even after all the long years of his imprisonment these agencies still fear his principled unyielding Republicanism. RNU once again calls for the immediate release of these Prisoners and demand Amnesty International declare them Political Prisoners.
Learn more about Michaels case here http:// www.michaelmckevitt.com/