The Spirit of ’45: What Unity? Revolutionary Class Struggle Or Class Collaboration And Popular Frontism?

Ken Loach’s film has fudged The Spirit of ‘45. Was this the spirit of revolution that swept Europe as shown in the determination of workers never to go back to the hungry 30s? Or the spirit of the class traitors of the Labour and TU bureaucracy who bought off and betrayed this spirit? Ernest Bevin slavishly defended the British Empire; the Communist Parties entered popular front governments and backed Churchill in 1945. Only the Trotskyists still fought for the working class and socialism through revolution and were jailed and murdered for it by Nazis and ‘Democratic’ government in the US, Britain, France, Italy, Sri Lanka, Vietnam, etc. Loach knew all this once when he was around the Socialist Labour League. 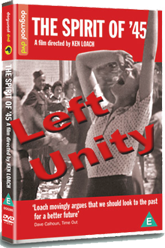 The desire for unity in the working class again finds its expression in yet more initiatives to unite the left. Serious socialist must orient to these initiatives, the People’s Assembly on the 22 June in Central Halls, Westminster and Left Unity who now claim 8,000 members and are holding their first national meeting of representatives from Left Unity local groups on 11th May in central London.

We should intervene to influence and win to revolutionary class struggle politics serious socialists who are responding to the desire for unity. They will recognise the reality of the class treachery of the Labour party leaders, are impatient with what they see as the sectarianism of the far left and may see some problems with both these new initiatives.

Both initiatives fudge the difference between class collaboration and class struggle. That is they take the left TU leaders and others at their word when they say they are opposed to austerity without questioning them on why they are not leading any serious fight and continue to sell out industrial disputes.

In particular the Peoples Assembly lacks any real internal democracy. It has the classic talking shop format: fill the platform with famous speakers, allow very limited time for discussions from the floor and supplement this with workshops who have no decision making mandates. So the self-appointed leaders direct the movement and  cannot be removed and the dissidents can just lump it.

The PA is led and directed by Counterfire’s John Rees and Lindsey German and boasts eight TU General Secretaries, Tony Benn, four MP and the Communist Party of Britain. It is just a talking shop and because the most vital question for the working class today, that of its leadership, is off the agenda because the platform will contain so many class collaborators, it cannot go anywhere. Nonetheless because it will gel with a desire for unity on behalf of a new layers of workers and youth it is important to intervene there.

Left Unity boasts many of the same signatories; Ken Loach, Owen Jones et al and is the brainchild of Andrew Bergin and Kate Hudson of the Stop the War Coalition. However it sets out to form a new party, hence the absence of all those General Secretaries and Labour MPs. Although the politics of class collaboration are the same it does seem to have better prospects for intervening politically, with more internal democracy and prospects for real debate and discussion.

Only the Trotskyists still fought for the working class and socialism through revolution and were jailed and murdered for it by Nazis and ‘Democratic’ government in the US, Britain, France, Italy, Sri Lanka, Vietnam, etc. Loach knew all this once when he was around the Socialist Labour League.

Some serious socialists have objected that this call for a new left party cuts across the need to build the left in the Labour party. This is a clear reformist objection which cuts no ice with those of us who know the difference between revolutionary politics and reformist politics, which is essentially counter-revolutionary. But on the other hand this too is a reformist project but one where we may advance the cause of building the core of a revolutionary party. Most left groups have responded favourably to its Left Unity call. The SWP’s Alex Callinicos recognises that these are two reformist approaches and has a somewhat nuanced approach:

“Both have to be taken seriously. My hunch is that the drive to revive Labour will prove the stronger of the two. This is of course problematic, because all Labour governments—including the one elected in 1945—have chosen to manage rather than transform capitalism. The structures of the party are now so undemocratic that it’s hard to see how any attempt to “reclaim” Labour can hope to succeed. This makes it all the more important that all those who want to see a left alternative to Labour work together. There are plenty of obstacles in our path as well, but the scale of the crisis and the suffering it is causing demand that we overcome them.”

The Socialist party’s Peter Taaffe has this to say about Left Unity: “Ken Loach, the socialist, radical film director, understands that New Labour represents a dead end and therefore it is necessary to seek a new road; hence his call for people to sign up to a new ‘left unity’. By so doing, he has opened up a very welcome discussion on the need for a viable alternative to the Labour Party for working class people engaged in the anti-cuts campaigns as well as working people generally looking for an alternative to New Labour”.

This is the traditional centrist fudge between reformism and revolution. But all parities involved ignore the question on the top of this article: the relationship between international and national politics. All these political tendencies have disgraced themselves politically in the Imperialist wars on Libya and Syria. And so must stay silent on what were the real lessons of 1945.

And as Ken Loach’s spirit of ‘45 is currently being used as the springboard for these new regroupment is worth remembering what it is Ken Loach forgot about in his film – how the British ruling class paid for the welfare state that was expanded so much after the war – they paid for it with the booty of Empire and they aim to solve this crisis in that way too.

Only now the Empire is gone and the working class will take the full force of the cuts. So it is worth remembering what the political content of that post WWII era was. The Labour government defended the Empire in order to protect the living standards of their constituencies, they said. As Adrian Budd said in the IS Journal in 1994:
“The conceptual framework of Attlee-Bevinite diplomacy revolved around the continuation of the empire and the view that Britain remained a great power. In October 1944 Labour had supported British intervention against the popular forces of the Greek Communist resistance, ELAS, in favour of the pro-monarchist right wing Voulgaris government. At the December 1944 party conference Bevin argued that ‘the British Empire cannot abandon its position in the Mediterranean’,and, although Nye Bevan’s riposte won the loudest applause, Bevin won on the block vote. He was able to rely on this in coming years”. [2]

Map of Greece, showing strongholds of the communist Democratic Army (DSE), in 1946 and 1947. (Map by Tom Cooper, based on Encarta 2003 software)

How can socialists hope to solve our economic problems in this counter-revolutionary way again? Ken Loach has drifted a long way to the right since his sympathising days with the Socialist Labour League by ignoring this very real political content of Labour in 1945 as many on the left today ignore the content of the Imperialist-sponsored attacks on Libya and Syria. Revolutionaries are defeatists in all the wars waged by our ‘own’ Imperialist ruling class. We are revolutionary anti-Imperialists internationalists or we are nothing!