The Spartacist Family and the National Question

The IBT are not reassessing at all
All the quotations by the IBT from Lenin are from his writings on the national question from 1913 to 1916 but nothing from his post revolution writings and certainly nothing from his last struggle with Stalin on the question of the right of Georgia to self-determination. Remember that in 1913 Stalin wrote his dogmatic piece on self-determination and Lenin agreed with it. He opposed Stalin and others on the national question from 1919 and could scarcely have been stronger in his opposition to him in 1922 and 23. The IBT want to retain the Lenin of 1913-14 which was close to Stalin and the German Social Democracy on certain aspects of the national question but not the Lenin of 1920-23 who had a far more developed position. But the Hydra now acknowledge that Lenin did develop his position from 1913: “Lenin’s last struggle was waged against the Great Russian chauvinist bullying of the Georgian communists by Stalin and Ordzhonikidze.”

When Lenin learned of the actions of Stalin and Ordzhonikidze in Georgia in December 1922 he was absolutely furious. By the end of December, he was able to function almost normally, and he began a merciless political assault on Stalin, it is he who is the prime “rascal and a tyrant” he refers to here:

I suppose I have been very remiss with respect to the workers of Russia for not having intervened energetically and decisively enough in the notorious question of autonomisation, which, it appears, is officially called the question of the union of Soviet Socialist Republics … It is said that a united apparatus was needed. Where did that assurance come from? Did it not come from that same Russian apparatus which … we took over from Tsarism and slightly anointed with Soviet oil? … It is quite natural that in such circumstances the ‘freedom to secede from the union’ by which we justify ourselves will be a mere scrap of paper, unable to defend the non-Russians from the onslaught of that really Russian man, the Great Russian chauvinist, in substance a rascal and a tyrant, such as the typical Russian bureaucrat is. There is no doubt that the infinitesimal percentage of Soviet and Sovietised will drown in that tide of chauvinistic Great Russian riff-raff like a fly in milk … were we careful enough to take measures to provide the non-Russians with a real safeguard against the truly Russian bully? I do not think we took such measures although we could and should have done so. I think that Stalin’s haste and his infatuation with pure administration, together with his spite against the notorious ‘nationalist-socialism’ played a fatal role here. In politics spite generally plays the basest of roles. [19]

In their outrage at past Robertsonian positions abandoned they give us an appalling list of their historical crimes which they feel are about to be repudiated. Not only did they take the pro-imperialist side in Ireland and Palestine; the IBT are nothing if not defensive of all the history of the Sparts before they departed:

“We regard the SL’s position on “interpenetrated peoples” to be among its most important original contributions to the Leninist-Trotskyist tradition. Robertson, who played a central role in developing this approach, as he did on virtually every important programmatic issue (including Quebec), deserves much of the credit for it. The iSt’s theoretical framework on the national question allowed it to develop a revolutionary position on a range of important conflicts, unlike its pseudo-Marxist competitors at the time.

The USec, LRP, CTC and all the others who disagreed with the Spartacists’ refusal to take sides in the Lebanese civil war were similarly outraged by the position of dual defeatism in the Arab/Israeli conflicts of 1948, 1967 and 1973 and the analysis of Israel/Palestine as another instance of interpenetrated peoples. Given the ICL’s recent embrace of what we might designate neo-Pabloism on the national question, might this also be up for revision?”

In fact, the Sparts did take sides in the Nakba in 1948, they took the wrong side, the Zionist side and Yossi Rad/Schwartz takes credit for changing it to a slightly better, but still wrong position of neutrality. Now a member of the Occupied Palestine/Israel International Socialist League and the Austrian-based international the Revolutionary Communist International Tendency (RCIT) Yossi has the correct line of “a revolutionary defeatist position against Israel in its War in 1948 and a revolutionary defencist position for the Arab countries”. [20]

Yes, you read that correctly, the Sparts refused to take the anti-imperialist side of the Palestinians and Lebanese leftists led by Kamal Jumblatt and his son Walid in the Lebanese Civil War from 1975 to 1990 that resulted in 120,000 fatalities including the terrible September 1982 Sabra and Shatila massacre of the entire camp of Palestinians carried out by the fascist Lebanese Phalangists with the full cooperation of the Israeli Defense Force. “Interpenetrated peoples” you see stopped them opposing imperialism here. And everywhere else. In their reply to the Hydra article there is an incredible section “Neo-Pabloism in Beirut & Entebbe” where they boast of their sordid history and actually quote the obviously correctly criticisms of the League for the Revolutionary Party and the Communist Cadre and whine, in effect, “have you lost the faith, now?”:

“In January 1977, at the height of the Lebanese bloodletting, the Stalinophobic League for the Revolutionary Party (LRP) intervened at a Spartacist League (SL) forum held at Columbia University in New York City:

“LRP speakers charged that the SL had reneged on the revolutionary obligation to give military tactical support in the anti-imperialist struggle in Angola and in the Palestinian fight in Lebanon when they were under attack by the U.S.-backed right wing and the Syrian army. The SL replied that Lebanon was a ‘tribal puzzle’ whose pieces apparently, have no relation to world imperialism.” —Socialist Voice, No. 3, Spring 1977

After 40 years, the ICL has now apparently come to agree with the substance of the LRP’s criticisms, at least on Lebanon.”

Any revolutionary socialist with even a modicum of internationalism would agree with the LRP. But NO, NO, NO, we must believe in the Unity and Trinity of God Robertson. The LRP correctly saw what this meant:

“The uniqueness of the Spartacist League, what many leftists mistakenly regard as ‘sectarianism,’ is that it does not capitulate to the nationalism of the oppressed nations – because it directly reflects the attitudes of the privileged sections of the American working class.” ibid 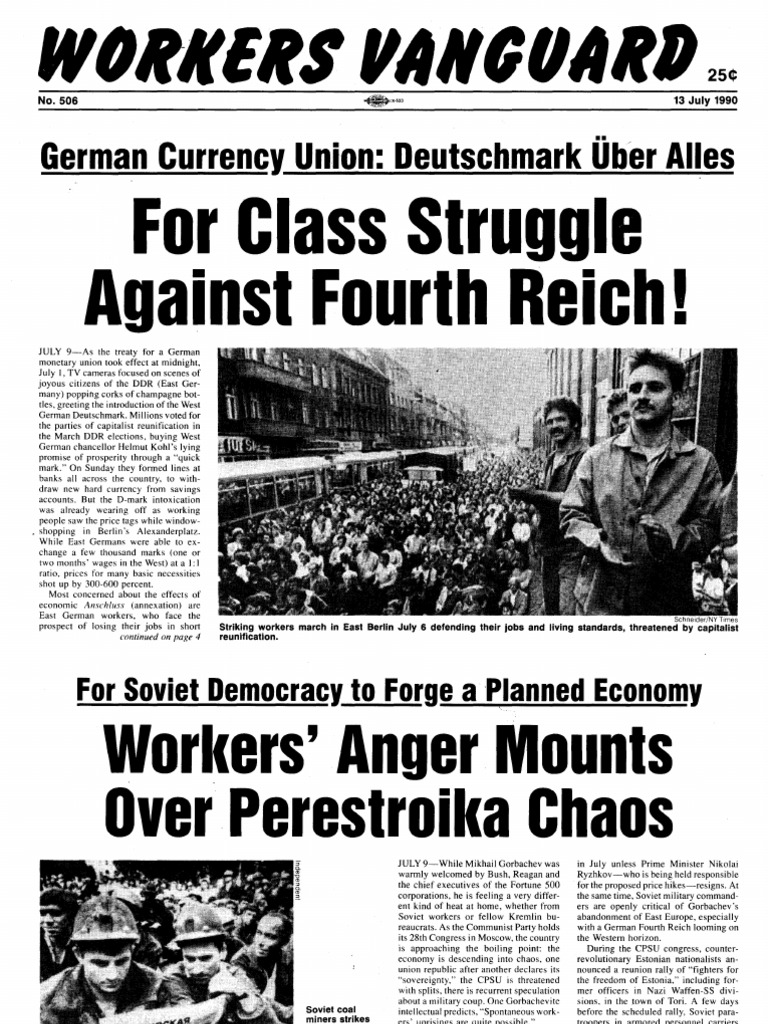 The Sparts intervene in East Germany in 1990, eventually leading to the split with Jan Norden’s group, the IG/LFI in 1996.

The IBT defend the indefensible, the SL/ICL and the IG/LFI make a partial correction

In the Summer of 2017, the Spartacist League/ International Communist League (SL/ICL, “the Sparts”) produced the bombshell document, The Struggle Against the Chauvinist Hydra. It is the furthest they have ever gone in reassessing their own history and so is a welcome development. The ostensible target of the polemic was the number two leader, veteran member Mark Tishman (Joseph Seymour) whom they blamed for their previous, now rejected, positions on the national question. It is impossible to escape the conclusion that the real target is the founding guru himself, James Robertson, who controlled the cult with a rod of iron, certainly since the mid to late 1970s, telling him ‘It’s…