On Dutch Imperialism and Brexit 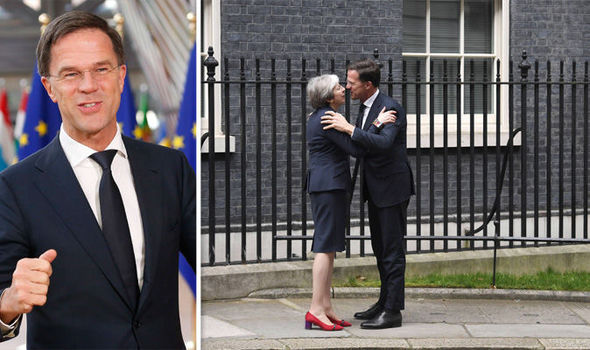 Mark Rutte, Leader of the VVD since 2006, Prime Minister since 2010, with Theresa may in February 2018. Worked as a manager for Unilever and other corporations.

The elaborating of the political-economic character of the Netherlands needs to be addressed, or rather that of Dutch imperialism as its finance capital operates from Amsterdam and its economic heartland which is situated in the industrial and port region of Rotterdam, whose main interests are given direction from the political capital the Hague.

We need to be able to set out the immediate main tasks of the working class and the longer term perspectives, which can lead indeed to – if led by an authentic revolutionary socialist vanguard party – a workers’ revolution in the Netherlands, i.e. overthrowing the dictatorship of finance and monopoly capital and bringing that multi-ethnic majority and wealth-producing class to political power, via the setting up of its own dictatorship based on revolutionary workers’ councils.

As we know already a century ago in November 1918 (following the 1918 unsuccessful German revolution that had begun in the port cities and brought down the Habsburg dynasty) the call for the formation of such councils had been made by the main leader of the bourgeois workers party (SDAP [now PvdA]) Troelstra, but however with the devious intention of maintaining its social chauvinistic influence within the organised working class and thus preventing Marxist and anarchist organisations from seizing the leadership of such a workers’ movement fuelled by deep sentiments of historical injustices.

Today, in a world dominated both economically and militarily by US imperialism, in the face of a most likely departure out of the European Union (EU) by Great Britain, the following thus far unexamined question appears before Holland’s political leadership of the bourgeois ruling class, and its workers’ vanguard; does Great Britain’s demise as one of the three main European imperialist powers – together with German and French imperialists – mean that Holland can expect to be upgraded from a third-rank global imperialist power to a more prominent secondary European one?

Actually, a little-known fact, in the Netherlands occurred the first successful bourgeois revolution, known as the Dutch Rebellion against the Spanish Hapsburg feudalist monarchy, which in 1588 resulted in the establishment of a bourgeois republic and rapid capitalist development in the Netherlands.

Ever since that revolutionary (i.e. one class replaced by another as ruling class) ousting of the then dominant overlord in Europe, Philip II of Spain, during the Eighty Year War of Independence (1568-1648) [1] from what is a in fact but the a strategically located delta-region in north western Europe, the Dutch bourgeoisie of the western provinces have always dominated and subjugated the internal outer-regions, as well even more brutally the colonial outer-regions in the Antilles and Indonesia.

The next bourgeois revolutionary episode in Europe did not open for another 50 years,  this time in England, the other European power with advanced capitalist relations.

This Brexit-departure is being led by right-wing conservative Tories and Ukipers who are allied more with dominant US imperialism than with Germany, their traditional European foe. Germany is Europe’s primary imperialist power in the recent and still unfolding post-USSR era of increasing inter-imperialist tensions. In this context Brexit a very significant development which is reshaping the inter-imperialist power-relationships within the EU.

Of course this upgrading of status and influence gladdens the hearts of the ruling Dutch finance and monopoly capitalists, whose governing big business cabinet is the right-wing liberal People’s Party for Freedom and Democracy [VVD] and the royalist reactionary Christian Democratic Alliance [CDA] [2], whose stock market managers are looking forward to receiving much finance investment fleeing the UK from across the Channel, accompanied by all types of bankers and managers who strongly prefer to stay within EU-borders so as to remain close to the economies and stock markets of German and French capital.

And, additionally, they anticipate the unique opportunity offered to Holland’s imperialist capitalists to replace the UK as a junior power of the US situated inside the EU-block which is dominated by German capital.  They expect to be rewarded (thanks to past and present-day contributions made by ‘peace-keeping’ Dutch Marines and F-16s from Afghanistan and Iraq then to Mali today) at future tables set up to divide up the imperialist loot (that always follow military victories of the imperialists in the neo-colonial territories) to their own benefit, in the obtaining of some, if not a great deal of booty in natural resources, access to cheap labour outside its national borders and toeholds for their military forces in strategically important neo-colonial regions, of the imperialist loot.

Just as significant a factor, right now and historically, is the fact that the Dutch internal economic market is very much integrated into the Ruhr-region and Germany’s hinterlands. This economic dependency came about as a consequence of Holland’s strategic location as the late 19th-century rise of German industry assisted the parallel transformation of Dutch colonialism into its imperialist phase; and indeed the origins of several Dutch multi-nationals (the Shell, Rabo Bank, Heineken and Unilever) are to be found in … Indonesia.

France is the other major imperialist power on the continent, which we can notice has its dominating presence in Belgium, a third rank imperialist power, whose threatening political pressure is never far off; since 1815 (following the defeat of Napoleon Bonaparte) the Dutch has designated France more than Germany as its primary imperialist opponent. Hitler remained  ‘a befriended head of state’ until the invasion by German fascist imperialism [3] while Shell venture capital ruled the land through its Colijn-government,[4] an ‘ex’-Shell CEO [5]

For the overthrow of ‘democratic’ Dutch imperialism and the bringing about finally of the dictatorship of one of the oldest working class known to capitalism.

[1] Wikipedia:  The Eighty Years’ War or Dutch War of Independence (1568–1648) was a revolt of the Seventeen Provinces of what are today the Netherlands, Belgium, and Luxembourg against Philip II of Spain, the sovereign of the Habsburg Netherlands.

[2] Wikipedia: The Third Rutte cabinet is the cabinet of the Netherlands since 26 October 2017. It is formed by a coalition government of the political parties People’s Party for Freedom and Democracy (VVD), Christian Democratic Appeal (CDA), Democrats 66 (D66) and Christian Union (CU) after the Dutch general election of 2017.

[3] Wikipedia: The Battle of the Netherlands lasted from 10 May 1940 until the surrender of the main Dutch forces on 14 May. Dutch troops in the province of Zeeland continued to resist the Wehrmacht until 17 May when Germany completed its occupation of the whole country.