France’s Gilets Jaunes: Who they are, why they fight and how they can win

In order to summarize the events to this date, December 6, 2018, we must start from the beginning.

For many years, a deep, hidden but demoralized dissatisfaction has been hiding in the depths of French society at all levels.

The most affected groups were probably (les “laissez pour compte”) the ones which has nothing to live but state charity, the unemployed youth, those who had lost their jobs and are unable to find new ones, some small farmers, some middle classes crushed by taxes, poor workers who cannot get by on their very low wages, pensioners, the disabled, single women with children, poor students and/or those who have to work in addition to their studies, etc.  Many of the demonstrators who mount the blockades belong to these categories.

Then came the employees who have not received a real pay increase for decades and who suffer more and more from precariousness, poor working conditions, constant fear of unemployment, bullying, but who are more or less able to get by. Small bosses dependent on a large group, expressed like dry lemons by a war to low costs that makes them actual employees of large capitalist groups and banks. It is the so-called “middle class”.

Before them lay the insolent wealth of a whole bunch of narrow, insolent and despicable bourgeois categories, the most visible being the bosses, prominent journalists, artists, sportsmen and women, the latter two, much more accepted than the first two because people, not all, think their emoluments are justified.

The press that all day long promotes capitalist propaganda (neo-liberal as some call it) and the defense of all measures against the working and so-called middle classes; as well as most, if not all, politicians have lost all their prestige in front of these impoverished masses or that are becoming so.

In politics, this translates into people voting by default, by rejection or by the “you have to choose someone”, knowing that the next elected official will do the opposite of what he promised, when he promises something, and who will draw from the state coffers for their own benefit. Often people no longer vote and with each election there are more abstentionists.

The boards of directors of large capitalist corporations impose their needs on politicians who, faced with the difficult choice for those who claim to be left-wing, to push for a complete upheaval in society or to accept the “model” and reap all the benefits of their corruption, have never hesitated for this choice and have become fond of it; similar to the right, which makes exactly the same policy except for a few societal nuances.

The disoriented mass is demoralizing, the traditional left-wing parties live comfortably on sinecures and juicy “national representation” positions and only think of perpetuating this situation in the upcoming elections.

Social struggles, when they arise, are used in their electoral campaigns. Societal problems become a kind of consolation prize that is distributed sparingly to assert that society has “changed” and that we are “moving in the right direction”.

The powder was dry but the spark did not appear

The few political organizations with a number of militants, around a thousand each, who could have conducted a policy for workers (LO, NPA, POI-D) or had imported the ideological elements of bourgeois intellectuals, this was most evident in the indirect and even direct support for imperialism’s aggressive policy in Libya and Syria, for their nationalism, as well as in their sectarianism or the extreme opportunism that isolated or reduced them to nothing after a few years.

The masses, after having supported them during an election, in the face of the direct observation of their division and sectarianism, moved away from them almost instantly. This has reinforced their centrist sectarianism for some and their right-handed opportunism for others, condemning them both to nothing both in the electoral process and in the social movement.

The result of their politics is a social preaching detached from the political activity of the masses and, for the centrists, an artisanal or anarcho-syndicalist work that is called “Trotskyism”.

Thus, not only have they handed over the revolt to the right that is developing at this very moment, but also, at its beginning, they were completely mistaken in perspective, even though today they try to say otherwise.

They confused everything and even wrote:

“It is right that workers militants should not want to mobilize so that transport bosses can pull the chestnuts out of the fire, or so that the far right can advertise itself. But that is no reason to desert the field of the government’s policy challenge. If workers do not make their voices heard with their demands and their own ways of acting, others will be in the spotlight. And it is possible, if the truck owners reduce the power over taxes, that this could even turn against the workers.

In order not to let these forces, which are hostile to the world of work, take action, we must offer workers the opportunity to mobilize on their own ground.”

They hit the CGT’s trumpets to oppose the movement of the Yellow Vests. That is, not the real working-class movement as it is a step forward, but what they, who know better, want the movement to be.

The NPA wrote in a leaflet on November 6:

Calls to “demonstrate” on Saturday, November 17, “block roads or roundabouts” or “put a yellow vest on your dashboard” are circulating. These calls are limited to the issue of fuel prices, which is the main target of road employers, and which has led to support from various extreme right-wing movements or personalities.

We refuse to demonstrate with the extreme right, the fiercest enemies of the workers movement, of any social progress. Moreover, the defence of our purchasing power cannot be limited to the mere lowering of fuels.”

Only the POI, very weakened by a recent split, supported the movement. The POID (the split off from the Lambertist POIU)until today sings the chorus of the CGT….

Since the demonstration of November 17, in the face of the evidence, they have changed their discourse but have not fully engaged in the struggle. For some because they lack the militant capacity and militant discipline; for others, because they consider this movement, which is spreading as powder set on fire, everywhere and seriously threatening the bourgeois power, as if it were just another job in the middle of their daily routine.

The union leaders made exactly the same speech but with more determination. They play their role as class struggle firefighters and guarantors of “social tranquility”. Both the bourgeois press and ministers regret their lack of control over events because they would like “interlocutors to be deceived” and know the long record of service of trade union leaders with the bourgeoisie….

The result is that today, when the need for an organization that can guide this popular revolt is acute, we are faced with a complete political vacuum.

The extreme right that had offered itself from the beginning to take that leading part, lacks organization and militants but above all the revolted masses do not want them. It has failed all along the way, even its brutes have been severely rejected by the struggling workers, because the very nature of the movement leads it to demands always made by the left: increase in wages, pensions, and increasingly putting forward the political question of power, decision-making centers, policies that affect the lives of workers and poor and middle-class citizens.

So,’ organised’ from Internet and Facebook, people completely frustrated by the countless injustices, loss of purchasing power, etc. found themselves at more than 300 thousand in the street to protest against the situation. The absolute majority were workers who made demands well beyond the fuel tax. It was the question of the loss of purchasing power of the large majorities.

The state of mind of the demonstrators can be summed up in two slogans: “Macron resign!” a political slogan that targets power right now, and “We’re not giving up! “, a demonstration of the accumulated anger and a clear sign against the “one-day union walkouts” that unions are used to.

These so-called “action days” are used to make people believe that they are “opposed” and to do yet another similar one, a month later, until they tire the workers, who are less and less disgusted with the manouvers of the bureaucrats in tacit connivance with employers and the government.

The movement, as might be expected, has moved slowly but steadily forward, moving away from opportunists, from the far right without breaking the movement, moving more and more to left-wing demands and now, after street fighting that leaves no doubt about their motivation, involving other categories such as students and workers who, carried away by example and eager to fight even over the heads of their directions, join the struggle. 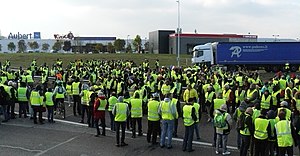 Already, the government has backed away by removing the advanced petrol taxes, the Prime Minister hangs from a thread and openly disagree with Macron who will toast him in the grill to save himself. But Macron has almost no political support either among the population at 80% against or in the political class who wait like leaning vultures for the death of the despising adventurer.

But this will not stop the movement any time soon.  On next Saturday we can expect an even bigger demonstration as unions and students join in. The government has announced harsh repression, but can it afford the threats? Will that stop the demonstrators? Can the government, the capitalists it represents, afford to go so far? Here, only the very careful study of all the variants, not generalities, makes it possible to draw an idea, even if no one can walk back and the demonstration will take place.

But the political bankruptcy of the entire left, which did not understand that this movement had to be invested with fair and thorough demands, because anyone could feel the open expression of social anger to the point of exploding, cannot be replaced because of a lack of valid options.

Many small groups have emerged with accurate analyses that are present or participating in the movement, but they cannot replace the larger battalions of other organizations.

One could hope of more if the involvement of the working class is on the scale of May 68, because today, the movement is condemned to triumph on the basis of demands that are increasingly advanced, otherwise an electoral process will raise all the fears and conservatism from the ground and will still bring an enemy of the workers to the presidency. I can also if the movement go further enough go to a new “left” social democrat experiment, but the odds are lesser.

These reflections, these ideas, I make them before a date that can be pivotal in both directions but which make it possible to follow the political path of a movement where the masses have always found themselves more advanced than the directions and which continue to advance.

26 thoughts on “France’s Gilets Jaunes: Who they are, why they fight and how they can win”