No platform for the DFLA and Tommy Robinson supporters—sweep the fascists off our streets! 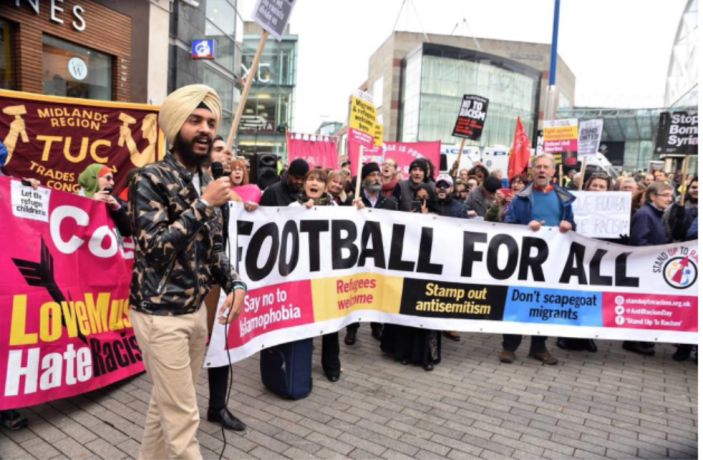 In November 2016 Tommy Robinson visited Israel and was photographed on top of an Israeli tank. The state of Israel afforded a fulsome reception to the British fascist man. Liberal Jews objected when reports emerged in July 2017 that members of Manchester’s Jewish community held a secret meeting with Robinson, the former leader of the far-right English Defence League at which he gave a torrid Islamophobic speech.

The Times of Israel carried a defence of Robinson’s visit in early December 2017 by one Brian Thomas in which he berated liberal Jews and the Jewish Chronicle (JC) for not celebrating with the fascist:

“Your timid Jewish community in Britain, which is so careful not to rock the boat or vigorously defend “settlement activates” may not “desire any links whatsoever with Robinson and his ilk”. But I can assure you that strong and proud Jews in Israel feel much the same about you and the subservient parts of UK Jewry who seem more concerned with their future peerages than the real security of Israel.”

Marcus Dysch, had written the offending article in the JC on 24 November, “Tanks, but no tanks – we don’t need Tommy Robinson as a friend”. Stephen Pollard, JC editor and hound of bogus left wing anti-Semitism in Labour, wrote an article on 5 July, 2017 against the secret Manchester meeting: “Jews who ally with Tommy Robinson are our own worst enemy, do not be suckered by street thugs.”

The Fascist/Zionist Alliance and Jewish opposition

But Pollard has no problems with the neo-fascist Israeli Minister for Justice Ayelet Shaked or a previous holder of that post, the war criminal Tzipi Livni. In July 2014 Shaked approvingly shared on her Facebook page a genocidal rant by an extremist Jewish settler who wrote:

“Behind every terrorist stand dozens of men and women, without whom he could not engage in terrorism. They are all enemy combatants, and their blood shall be on all their heads. Now this also includes the mothers of the martyrs, who send them to hell with flowers and kisses. They should follow their sons, nothing would be more just. They should go, as should the physical homes in which they raised the snakes. Otherwise, more little snakes will be raised there.”

Following Robinson’s jailing the Twitter hashtag, #FreeTommyRobinson, has gone viral courtesy of the far Right’s not insubstantial online community, and messages of support for the father of three from Luton have been posted on social media by such figures as President Donald Trump’s eldest son, the disgraced American comedienne Roseanne Barr, Meghan Markle’s sister Samantha and Netanyahu’s Social Media advisor. More than 500,000 people have signed an online petition demanding his release from jail and hundreds of pro-Robinson protesters have marched around the country and are marching in London Saturday 9 June. 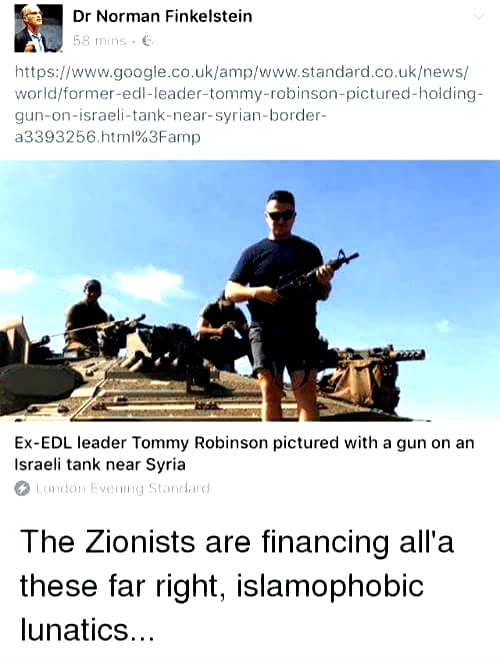 In the US a fascist killed Heather Heyer and injured 19 by driving his car into leftist counterdemonstrators against the “Unite the Right” march in Charlottesville, Virginia, last August. This was an indication of the rapid rise of the fascists and far right in Trump’s US; the Ku Klux Klan and National Socialist Movement, Vanguard America, Identity Evropa, the Traditionalist Workers Party and True Cascadia.

On the other hand increasingly Jewish students in the USA are rejecting lying Zionist propaganda. A referendum at Barnard College, the elite women’s school in New York City, conducted by students from Jewish Voice for Peace and Students for Justice in Palestine returned a 64%-36% victory for the BDS campaign in the most heavily Jewish school in the country that is not officially Jewish. There are approximately 850 Jewish students at Barnard out of a total undergraduate population of around 2,500. Some 1,153 participated in the vote.

The same IDF who welcomed Robinson so enthusiastically have now murdered more than 123 defenceless Palestinians on the Gaza border. A recent victim of these appalling war crimes is Razan al-Najjaf, a 21 year old Palestinian volunteer paramedic, brutally murdered by Israeli sniper on 1 June.

Apparently it’s ‘anti-Semitic’ to compare Israel to Nazi Germany and say this state has no right to exist. Bullshit. It’s an act of anti-Arab racism to forbid comparing these racist murders to the actions of Nazi Germany. What those who say this mean is that Jewish life is more important than Arab life. Which is exactly what motivated the foul murder of this woman and many others.

Did the Nazis so blatantly murder medical staff like Razan al-Najjaf ? The Labour right, with the concurrence of pro-Corbyn administrators, say that such comparisons are ‘anti-Semitic’. We say that to fail to make such comparisons is racist against the Arab victims of Israel. A tweet by Netanyahu’s Social Media advisor. Note the ‘likes’ and retweets. Proof that the fascist right and ultra nationalist Zionists have something in common; perhaps Robinson is on the IDF payroll?

The inhabitants of Gaza are mainly people whose families were terrorised and ethnically cleansed from so-called Israel proper in 1947-49. Their homes were stolen 70 years ago; their homeland was occupied then. They are marching and protesting within the open-air death camp, Gaza, that they are forcibly confined to.

It is indeed a death camp, Israel has cut off water and electricity to Gaza civilians and the man-made “humanitarian crisis” there is among the worst in the world. Malnutrition is rife, and there are enormous numbers of young people there who are traumatised by Israeli bombings and strafing of the people there, which has been happening for decades.

As well as the killings of civil rights marchers, 13,000 have been injured, huge numbers shot with dum-dum bullets which are illegal and designed not just to wound, but to cripple, blowing enormous holes in bodies and legs. These are monstrous crimes quite comparable with those of the Nazis, and as far as I am concerned those who try to forbid such comparisons are worse than holocaust deniers. After all, holocaust deniers are in no position to force their views on others, but that is what the totalitarian, pro-Israel and in reality, pro-genocide racist wing of the Labour Party are trying to do.

The two-state solution is a racist lie; all Israel is occupied territory. Indeed, logically anyone who supports a two-state solution based on the 1967 borders must support the Israeli state against today’s Gaza Right to Return protesters, who are challenging their ethnic cleansing in 1947-9, not just the 1967 occupation of Gaza.

Razan al-Najjaf (right) with her hands up to demonstrate that she was unarmed, moments before she was shot in the chest with an explosive bullet, which killed her instantly, by an Israeli sniper while going to the aid of a wounded demonstrator.

Zionist and far-right groups in the UK are targeting the annual Al Quds Day rally which is due to take place in London on June 10. They have urged the London Mayor and the Home Secretary to ban Hezbollah flags at the march, which are a symbol of resistance against the Israeli oppression. Matthew Offord, MP for Hendon, has written to the new Home Secretary calling on him to proscribe Hezbollah “in its entirety”, after Amber Rudd failed to do so.

Labour MP Louise Ellmann, the vice-chair of Labour Friends of Israel, also wrote to Sajid Javid and to Metropolitan Police Commissioner, Cressida Dick, asking her for clarification on whether Hezbollah flags will be allowed at this year’s demonstration.

Writing to Javid, she said the “flouting” of the law is “an affront to Britain’s commitments to fight extremism and a cause of serious distress to the Jewish community, who have to witness an annual display of support for an organisation which actively seeks their destruction”.

Currently Britain outlaws the military wing of Hezbollah but recognises its political wing. The Islamic Human Rights Commission, one of the organisers of the Al Quds Day march, says the authorities should ignore pressure from the Israel lobby and preserve freedom of speech on the streets of London.

“In Lebanon Hezbollah and their supporters recently took the overwhelming majority of the seats in Parliament and it is very clear that Hezbollah is part and parcel of Lebanese society and the political system. But the argument advanced by the Zionists is really pathetic because it’s like saying that the British flag is used by the army so it’s the Armed Forces flag.”

DFLA rallying poster for Sunday 10th. All anti-fascists should defend the march 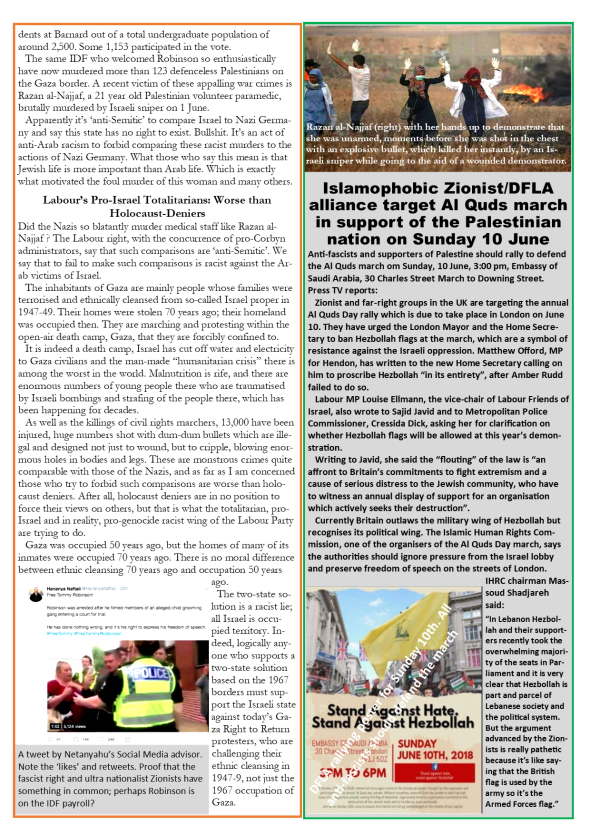