The STATE OF WORKERS’ STRUGGLES IN FRANCE

On March 15, a protest by retirees against the government gathered more than 100,000 people in Paris and tens of thousands in the provinces, according to organizers. A broad mobilization that surprised many observers. It was the answer to a reduction in pensions of 250 euros per year for all those who receive more than 1200 euros per month.

Government candidates (LREM La République en Marche) have lost all by-elections and the popularity of the president and the prime minister is declining. Moreover, they have never exceeded 50% approval. 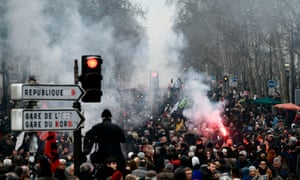 On 22 March, railway workers, civil servants, and teachers took to the streets in large numbers. The police counted 300,000 throughout the country and the trade unions claimed 475,000. The union leaders of the railway workers have announced a “pearled” strike two days a week, every week until June.

As we wrote in Socialist Fight after Macron’s electoral triumph, [1] his entire reform program aimed at the execution of a vast plan of “liberalization” of French society. The recent “reform of the Labour Code”, such as the liquidation of the Railroad Workers’ Statute, as well as the project to “reform” the compensation of the unemployed are underway or already in place.

The major components of the transformation of the solidarity pension system (the ones who work pay for the retired) into a financial pension system, which bankers and other financial companies are eagerly awaiting, or the liquidation of the Social Security System, are awaiting the demoralization of workers following the defeats of which the bourgeoisie counts to be put as laws. They are waiting “favourable conditions” but are already announced and promoted by the “news” on TV. And that is because the bosses are counting on trade union leaders not to wage a full fight and/or on the repeated defeats suffered by the whole working class since then will demoralise them.

The complete absence of any party, whether Stalinist, reformist or so-called Trotskyist, turns workers demonstrations into a sort of street-walks with no future. The stakes of these struggles are such that without a solid, militant organization and united action, the struggle exhaust the masses themselves, demoralize those who participate and lead to even greater defeats.

The demonstration of 22 March, although important, was not sufficient to make the government back down. They “took note” and declared that they would continue with their policy because they “count with the necessary parliamentary majority.” Vae Victis!

Some, still taking their desires for reality, invoke the spirit of May ’68 but we are far away from that today. This Marotte, invoked every time there is the beginning of a mobilization, is squashed in the bud by the union leaders as soon as they see that it can grow, as it would surely grow if we lead it well and really mobilize, because anger roars, is only that, it becomes an incantation of small groups without any hold on the events or any militant force. A silly consolation that eventually further demoralizes many people.

There is still some response from labour leaders to the government’s challenge. They have called a Demo on the 19 April. But is only the CGT calling because FO [2] has rejected the call and CFDT [3] has said that it is not the means or ways to “obtain something”… (FO and CFDT are the two other big Unions in France but they mobilise fewer rank and file than the CGT. In fact, the CGT is the only real mass worker’s fighting union, even if reformist. That should mean, most probably, a lesser attendance than the 19th and the subsequent demoralisation of the masses that look always for “Unity”.

The FO attitude is quite baffling because, inside the FO Union, the POI (conducted by a so-called Trotskyist fraction) has many cadres. They have said many times that “they don’t want to endorse demonstrations without tomorrow”, but, is this an excuse not to join the mass movement against a full swing attack against all worker’s in France?

The small formations of all orientation (because today the political movement of the workers or they are little groups or it does nothing other than follow the trade-union slogans) call for ultra-left measures without finding any echo in the mass.

Today we find nevertheless a certain concern and mobilization of the base, without going beyond or, even being comparable to other mobilization such as the fight against the CEP or against the law for the extension of the retirement age, and with always the same people demonstrating, lacking even a united and decided group of workers, not to say real political parties of the working class.

The patient can only be treated with the appropriate medicine and this one is not in the pharmacy in France: a real communist party. There is not even the awareness of its necessity in an adequate form because everything that exists is as sick as the sick workers’ movement: ideological decadence and organizational weakness. The crisis of Stalinism and pseudo-Trotskyism prolongs the agony of the workers who see themselves stripped of their indirect wages and even their direct income to the benefit of a bourgeoisie, today in open trade war, preparation for new wars and forced to endanger its domination by impoverishing each time more and more layers of workers and/or unemployed.

Faced with such a reality, full of all possibilities, those who still think (and who are not “intellectuals” in their living rooms) are taking wrong ways in search for “solutions” of facility without seeing that it will be necessary to go through the long work of reconstruction of the political organizations of the working class.

Nevertheless, these struggles show that the French working class has the will to mobilize despite having been deluded so many times and for nothing. It is surely a basis which, in exceptional situations, can prove decisive.

[1] See,  France: The repealing of the Labour Code and the permanent State of Emergency, https://socialistfight.com/2017/06/25/france-the-repealing-of-the-labour-code-and-the-permanent-state-of-emergency/

[2] The General Confederation of Labor – Workers’ Force (French: Confédération Générale du Travail – Force Ouvrière, or simply Force Ouvrière, FO), is one of the five major union confederations in France. In terms of following, it is the third behind the CGT and the CFDT.  The Independent Workers’ Party (POI), the Lambertists, self-declared Trotskyists, in the Independent Workers’ Party (POI) reputedly have hundreds of full-time officials in the FO.

Defending the essentials of Revolutionary Trotskyism »
« Renegades from Trotskyism, Stephen Hawking and the Big Bang

2 thoughts on “The STATE OF WORKERS’ STRUGGLES IN FRANCE”