Trump, Bolton, Theresa May, nerve gas and the jeremiads of the conspiracy theorists

The Syrian Arab Army (SAA) is inching closer to victory in east Damascus as government troops pushed through building after building and civilians are freed from the tyranny of the terrorist groups funded by the CIA, Saudi Arabia, and the West.

The imminent fall of East Ghouta is the latest failure of the US in its regime change efforts in Syria and this is what is behind the feverish changes of personnel in the Trump administration to the most warlike hawks and also the extraordinary warmongering by Theresa May over the alleged nerve gas attack by Russia on Sergei Skripal and his daughter, Yulia. Consistent reports are that when East Ghouta is liberated by Assad and Russia the USA and Israel will launch a strike against Damascus, in an attempt to kill Assad and his government and so begin an invasion for regime change. Russia is aware of the plans and has promised retaliation against US forces who have illegally invaded Syria east of the Euphrates and US warships in the Mediterranean and the Gulf.

Trump’s latest appointment of the warmongering John Bolton as his National security adviser in place of the more cautious H.R. McMaster is a further indication of the preparations for war following his sacking secretary of state Rex Tillerson on 13 March because he was also too moderate on Syria, North Korea, and Iran. Tillerson’s replacement, CIA Director Mike Pompeo is also a far more bellicose character.  “I’m really at a point where we’re getting very close to having the Cabinet and other things that I want,” Trump told reporters on the South Lawn on Tuesday, moments after announcing he was ousting Secretary of State Rex Tillerson. 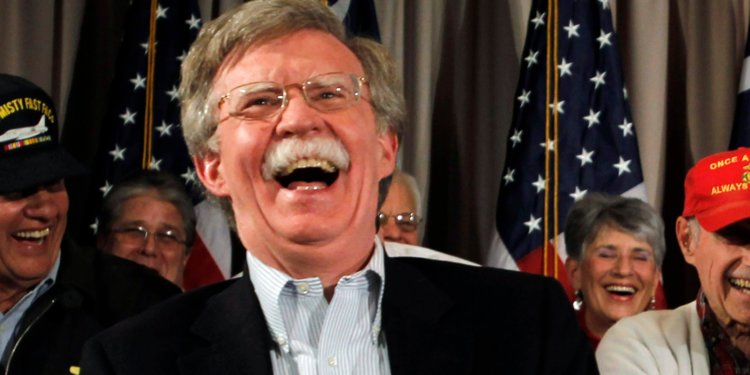 The New York Times wrote that the appointment of Bolton, after the dismissal of Tillerson and McMaster, means that Trump now has “the most radically aggressive foreign policy team around the American president in modern memory.” Just last month Bolton advocated a pre-emptive strike on North Korea:

“It is perfectly legitimate for the United States to respond to the current ‘necessity’ posed by North Korea’s nuclear weapons by striking first,”

He makes the same case for striking Iran. In the New York Times in 2015 he advocated the bombing of Iran by the US and Israel.

Trump has proposed Gina Haspel as the new CIA chief. It has to go through Congress but comments on her candidacy are that we are on the brink of a return to officially sanctioned US torture. Trump says he wants to bring back waterboarding “and a hell of a lot worse” and Haspel personally oversaw torture at a CIA black site in Thailand, and also oversaw George W Bush’s rendition to torture program and, unsurprisingly, many in the intelligence community that are connected to the US torture program are now leaping to her defence, saying that she shouldn’t be penalized now for just following orders back then.

In a statement released by the White House Bolton said:

“I am thankful to President Donald J. Trump for the opportunity to serve him and our nation as national security advisor. I am grateful for the friendship and support of the members of the National Security Council who worked together to provide the President with the best options to protect and advance our national interests”.

Trump sacked McMaster because he was infuriated by the leak of the fact that he had ignored a briefing instructing him not to congratulate Putin on his reflection, believing McMaster had done it.

Bolton has a propensity to speak too much of the truth, too bluntly. In 1994 he explained:

“There is no United Nations, there is an international community that occasionally can be led by the only real power left in the world, and that’s the United States, when it suits our interests and when we can get others to go along.”

He denied the 2003 invasion of Iraq was a mistake:

“When you say the overthrow of Saddam Hussein was a mistake, it’s simplistic”.

“If you knew everything you do today, of course you’d make different choices, but I’d still overthrow Saddam Hussein, who was a threat to peace and stability in the region.”

Russia needs to be tackled robustly:

Russian interference in the 2016 US election as a, “true act of war, and one Washington will never tolerate”. Putin is, “lying with the benefit of the best KGB training” he said in July 2017. And following the poisoning of ex-spy Sergei Skripial in the UK – an attack blamed on Russia – Mr Bolton said the West should respond with a “very strong answer”.

We must take all these developments together to get a true picture of what is happening. It is truly idiotic to take the events of their face values and to proclaim, like Paul Demarty does in Weekly Worker, no 1195, 22 March 2018 that:

“On the face of it, it is highly unlikely that anyone other than agents of the Russian state conducted the attack on the Skripals. There are the usual jeremiads of the conspiracy theorists in their endless battles with the ‘sheeple’, according to whom this was an inside job; and a story is doing the rounds that it may be a provocation on the part of the violently anti-Russian government of Ukraine.”

There is absolutely no proof that Russia had anything to do with this. All the propaganda is along the line of, “is highly likely they did it, it’s like what they would do, they have done similar things in the past”. Putin had absolutely no motive to do such a thing, just as Assad had no motive in the Ghouta attack in 2013. As we observed in relation to that Ghouta chemical attack of 21 August 29013, Socialist Fight International Statement: For the Military Victory Of Syria:

“We have every reason to suspect that Sarin and mustard gas (the same as used by the U.S. in Vietnam) which killed hundreds of people was more the work of imperialist terrorism in the region. Obama and the imperialist mass media are seeking to ascribe the blame to the Syrian government and are using this to justify the attack. And the same pro-imperialist forces, this time the KLA, fabricated a bogus tale of the Račak Massacre in Kosovo in 1999 (all the dead were KLA fighters) to justify the bombing of Yugoslavia, just exactly as they are probably doing now with their Sarin gas “red line” and the Weapons of Mass Destruction lies used to justify invading Iraq in 2003 and the Gulf of Tonkin incident in 1964 used to justify the war in Vietnam. It is also reminiscent of the Gleiwitz incident a staged attack by Nazi forces posing as Poles on 31 August 1939, against the German radio station Sender Gleiwitz in Gleiwitz, Upper Silesia, Germany (since 1945: Gliwice, Poland) on the eve of World War II in Europe. This was used to justify the invasion of Poland in 1939. [1]

Many jeremiads of the conspiracy theorists pointed out the convenience for imperialist warmongering of these incidents in the past and cast doubt on their veracity. I will wager that this is another one and I am not a jeremiad but do feel confident of dubbing Paul Demarty a naive victim of imperialist propaganda because of his third campist politics.

Currently, there is a major buildup of US warships in the Mediterranean; and the Russian general staff fear that Syria will be the target of a major cruise missile attack. Possibly, Russian forces will also be targeted. Couple this with the unprecedented black propaganda campaign against Russia in the US and the UK, and it seems very likely that a major shooting war is in the offing. Given that AI has lent itself in previous propaganda campaigns on the eve of wars, one finds that the latest Amnesty International report is merely a leading indicator for such a war. Amnesty International is embedded in a propaganda campaign — it will be cheerleading with blue and white pompons when, the humanitarian bombs fall (2).

One thought on “Trump, Bolton, Theresa May, nerve gas and the jeremiads of the conspiracy theorists”