This Socialist Fight leaflet was distributed at the AGM of the Palestine Solidarity Campaign in London on 27 January.

Socalist Fight supports the Palestine Solidarity Campaign and all other political initiatives aimed at delivering solidarity with the Palestinian people’s struggle against dispossession and the racist regime of Israel, which is built entirely on land stolen by force by European Jewish settlers with the backing of various imperialist powers.

Firstly with the Balfour Declaration of 1917, where British and US imperialism sought to solidify the support of wealthy American Jews in particular for the war against the Kaiser’s Germany by offering Palestine, a land inhabited for many centuries by Palestinian Arabs: Muslims, Christians and some Jews, to Jews internationally as a ‘homeland’. This was a historic crime, as Palestine legitimately only belonged to its people. British imperialism had no right to give its land to anyone.

This led to gradual colonisation, and finally, a reactionary rebellion by Jewish settlers against the British after World War II, with refugees from the Nazi Genocide used as a battering ram to deprive the Palestinian people of their homeland.

Two-thirds of the Arab population of Palestine were expelled in the 1947-49 Naqba, as the new state of Israel was created. In democratic terms, since it expelled a clear majority of the indigenous population by force, this state has no legitimacy, whatever the ideologues of capitalist ‘democracy’ in the West say.

This aggressive settler state consolidated itself in the 1967 war, where it conquered the West Bank and Gaza, those parts of Palestine it had failed to seize at its foundation, as well as the Syrian Golan Heights and Sinai. It later had to give back Sinai as part of a treacherous peace deal with the Egyptian military, which still rules Egypt as an Israeli-US client today. In doing so it secured itself a strategic alliance with US imperialism, particularly bolstered by the growing power and respectability of a layer of Jewish ethnic nationalists in the US ruling class, the same layer that Balfour sought hard to get on side in 1917.

Since then Zionism has grown in its power to dominate and dictate imperialist policy in the Middle East. The collapse of Stalinism seemed for a while to have created a unipolar world, with only one unchallengeable superpower, the USA, which would effortlessly dominate the globe. In the Middle East, however, the US has engaged in wars which have bolstered Israel and left chaos with which the US superpower has struggled.

A key purpose of imperialism’s wars in the Middle East has been to crush any state capable in any way of standing up for Arabs against Israel, even if the result is chaos, instability and rampant anarchy, as seen in Iraq, Libya and Syria. Israel is too weak to impose the kind of ‘order’ a more territorially rooted imperialism would generally prefer; so chaos, anarchy and Arab (and indeed American) impotence are its preferred lesser evil.

A Class Asset for Capital

There is a potential contradiction here between Israel and the United States, its current great-power sponsor. But this contradiction is suppressed in practice by the powerful Zionist component of the US ruling class. This is bolstered by numerous Christian Zionists, now symbolised by Vice President Pence, whose mangled variant of Christian theology now demands a Jewish state in the Levant to lay the basis for Jesus’s return. Or so they claim.

Marxists, however, consider that this ideology is pragmatically concocted to express class interests. In particular, part of the ruling class sees the disproportionately large Jewish ethnic nationalist (Zionist) billionaire capitalist component in the US (and to a lesser extent in Europe) as a particularly class conscious layer of the capitalist class and an important asset of capital itself. This is a huge turnabout from the 1930s, when capitalist anti-Semitic paranoia meant that even Jewish magnates were often suspected of communist sympathies, as attested by the ‘shocking’ (to current sensibilities) old film of Elizabeth Windsor, as a young girl, doing the Hitler salute along with her parents.

We consider even Arab bourgeois despots like Gaddafi and Assad to be a lesser evil to conquest by US imperialism, Zionism and their proxies, which have even included ISIS at least partially. Thus we denounced the imperialist overthrow of Gaddafi, and strongly backed the liberation of Aleppo by the Syrian Arab Army and its allies against the US/Israeli backed Islamist forces that at one time held this strategic city.

We are also the most consistent opponents of Zionism. We denounce what is specific about this reactionary movement; while it has always sought Great Power sponsorship for its objectives of a Jewish state in the Middle East, it is an independent force whose real programme was the creation of a state for the Jewish bourgeoisie of the imperialist countries to possess as their second homeland, from the point of view of their ideology, in case of some disaster at the hand of supposedly inevitable anti-Jewish movements in the countries where Jews live. 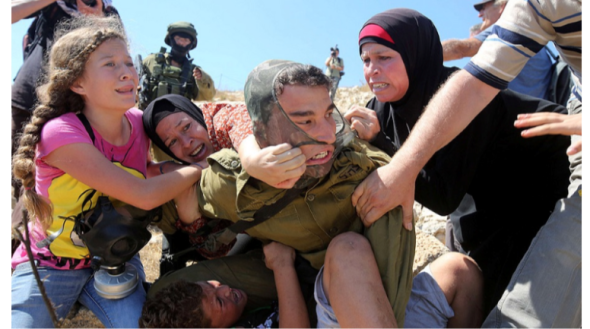 14-year-old Ahed Tamimi struggling along with other women against an armed Israeli soldier to free her 12-year-old brother.

This aura of victimhood that justifies this programme today is utterly fake. Jews are no longer oppressed; insofar as they organise in support of Israel, they act as an oppressor people in their political-communal activities, and not just in Israel. Jewish-Zionist bourgeois, for profound reasons connected with Jewish history, are represented among the capitalist classes of the West, particularly the USA but also here also to a real extent, in far greater numbers than those of Jewish people among the general population.

This gives the Zionists among them, who are the clear overwhelming majority of such super-rich of Jewish origin, considerable social power in Western society that is exerted on behalf of hard-line pro-Israeli policies.

This layer of the bourgeois in the West clearly is a major part of the Zionist project, and by the power they wield as a coherent group, punch well above their weight in determining policy and thus bring to bear enormous Western military and economic power in support of Israel against the Palestinians. They are just as much oppressors of the Palestinians as the Israeli ruling class itself, with whom they interpenetrate, as reciprocally do the Israeli ruling class with the Western ruling classes.

We must expose the racism of this Zionist layer and its ethnic nationalist core in the Western ruling classes. Their racism, in the aftermath of the Nazi genocide, is the only form of racism that it still intellectually and socially acceptable.

The notion that is hegemonic in bourgeois politics, that the crimes of the Nazis against the Jewish people somehow justify what has been done to the Palestinians, needs to be denounced. That idea, which amounts to Jewish supremacism, is just as pernicious today, with the unremitting suffering of the Palestinians for 70 years and more, as that of white supremacy and the pre-war anti-Semitism that led to the Holocaust.

There needs to be as strong and sharp campaign against Jewish racism today as there has ever been against anti-Semitism and white supremacism in the past. The core of this in the West is the powerful Jewish–Zionist caste in the ruling class, who consider Israel to be their state along with the one they live in.  As Marxists we do not take sides in conflicts and potential conflicts between different layers of the imperialist bourgeoisie. That is not our strategy.

However, since the struggle against Jewish supremacism and Jewish-Zionist racism in the West has not even been embarked upon as yet, we can say this. Revolutionary advances are often preceded by the introduction of divisions into the camp of the class enemy. A firm taking on, by the working class and Palestine solidarity movement, of the task of exposing this caste, could conceivably open up latent and potentially severe divisions in the Western ruling classes about the wisdom of pandering to Zionism and Israel’s foreign legion. Such divisions would benefit Palestinians, who at times, particularly now, seem to be fighting an enormously powerful and monolithic enemy.

Some capitulators to Zionism, particularly in the soft Labour left, consider this policy to be in some way anti-Jewish. It is nothing of the sort. It is the only consistently anti-racist policy confronted by the concrete reality of Zionism today.

For a Palestinian Workers State From the River To the Sea!

For a socialist Middle East!

All ‘Israel’ is occupied territory!