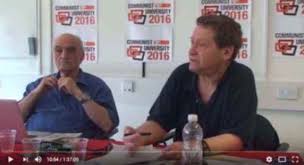 All yesterday’s LAW meeting proved is that the CPGB and the Greenstein crowd can currently mobilise approximately twice as many people as Socialist Fight on an issue like this.

It has no more significance that that. It does not give the witchhunters any hold on truth or any legitimacy for their behaviour, nor does it for one second hide the fact that they are in fact opportunist, anti-communist witchhunters.

We were thrown out of Labour Against The Witchhunt for criticising a form of racism that the dominant trend are politically soft on. It’s is now verboten, according to this trend on the left, to point out that the chief funder of Trump’s election campaign, one Sheldon Adelson, had a specific racist motive for funding Trump to unpick Obama’s deal with Iran to lay the basis for future US-Israeli war on Iran, and to secure US approval for the Israeli annexation of East Jerusalem through ‘recognition’ of Jerusalem as capital of the Jewish state.

Presumably it will also be verboten to point out that Michael Foster had a specific racist motive, as a wealthy Jewish-Zionist bourgeois, for taking the Labour Party to court during the 2016 leadership election, to try to get Jeremy Corbyn excluded from the ballot. That racist motive was quite simple. He sought the exclusion because Corbyn opposes on some level the oppression and disposession of the Palestinians. He did not want an ‘Arab lover’ to be Labour leader and therefore to be in a position to possibly become Prime Minister.

For the denizens of Labour Against The Witchhunt, whose name will in future have to be appended with the suffix  “(sic)”, it is now a condition of membership that it is forbidden to attribute a racist motive to the likes of Adelson and Foster, and to point out that they are part of a like-minded layer of wealthy, specifically Jewish racists.

If will be forbidden to note that this layer of the ruling class see their mission in life in using their considerable wealth to ensure that the major Western powers give outright, open solidarity to Israeli crimes against the Palestinian people.

In effect, for reasons of attempted self-preservation at the hands of the JLM, LFI and other bodies who are attempting to purge Labour of enemies of the oppression and disposession of the Palestinians, the CPGB, Tony Greenstein, Jackie Walker and other deluded people who followed them into this particular slaughterhouse, have signed up as political bodyguards for the likes of Adelson, Foster, Lord David Levy (one of the neocon architects of the Iraq War) and other Jewish magnates who, by virtue of their ethnic nationalist political programme, are responsible for driving a Western stance of open solidarity with all kinds of Israeli atrocities that go far beyond the parameters of any normal alliance.

Anyone who observes this obvious fact, and gives voice to it, is no longer allowed to support Labour Against the Witchhunt (sic!). Quite what this condition of membership has to do with fighting witchhunts against the left is not clear to anyone and it will become more and more absurd as it is seen in historical perspective.

What it now means is that LAW (sic) has adopted an anti-communist loyalty clause on behalf of Foster, Adelson and the like, that says that the specific racist politics of this layer of the UK-US-Israeli ruling class cannot be branded as the extra-territorial ethnic nationalism that it is. Under the misleadership of Greenstein, Conrad and Walker, LAW(sic) has declared itself protectors of the reputations of this layer of wealthy racist oppressors of the Palestinians from accurate Marxist criticism of their activities.

That is what today’s bizarre events signify in the real world, as opposed to the fantasy world of Tony Greenstein, Jack Conrad and Jackie Walker.

It is notable that Greenstein’s hysterical polemic against Socialist Fight quotes several passages from our articles, addressing the current transformation of the self-selected majority of Jews who follow Israeli-Zionist leadership into a semi-national formation (not a fully-fledged nation) that oppresses the Palestinians. We reproduce them here, with the relevant words emphasised, in order to expose the mendacity and/or functional illiteracy of Tony Greenstein (probably an element of both), when he brazenly lies about us in his article.

“‘the transformation of the Jewish Question into its opposite, from a question involving a people that suffered considerable, and at times enormous and genocidal, oppression in the early period of imperialist capitalism, to a question involving a people, who, insofar as they act in a collective manner under a quasi-nationalist leadership today, act as oppressors of another people, namely Arabs.” (emphasis added)

“‘a pandering to the nationalism and communalism of an oppressor people, as Jews have become today insofar as under Zionist leadership they manage to act collectively.” (emphasis added)

“‘This view of Jews as having escaped oppression and “become, insofar as they link themselves to Israel and give that state their support, an oppressor people, also gains Greenstein’s ire” (emphasis added).

As a sign of Greenstein’s mendacious ineptitude, and ability to believe his own lies, he uses these passages to state that:

“During the course of the debate Ian Donovan, who is the main theoretician behind SF’s anti-Semitic orientation denied that SF spoke of Jews as an ‘oppressor’ people. This was, as Moshe Machover has pointed out, quite clearly a lie.”

It is not true to say that SF accused Machover of lying about the simple assertion that we consider Zionist Jews in the imperialist countries constitute an oppressor people. What Machover actually said was that we considered every single Jew around the world, irrespective of their isolation or their views, to be part of an oppressor people. That is what he lied about.

The point is simple: the oppressor people we speak of, precisely because it is extra-territorial, is self-selected. Jews in the diapsora have a choice whether to join this formation, or not. This formation is distinguished by its support for Israel against the Palestinians. Those who support Israel, and support organisations that campaign for Western solidarity with Israel, including support for its crimes, vetoing UN Security Council resolutions critical of e.g settlement activities, are self-selected members of a social formation that oppresses the Palestinians. We call it a semi-national formation, whose material strength gives it some of the attributes of a nation without the territorial legitimacy that genuine nations possess. It is also a deeply reactionary formation that needs to be strategically defeated by the world proletariat as part of our overall struggle against imperialism.

Another example of Greenstein’s hysterical dishonesty is his screaming that Socialist Fight refuses to support the Jews-only groups such as Jews Against Zionism (JAZ) and Jews for Boycotting Israeli goods (JBig) that Greestein has used as his political vehicle in the Palestine solidarity movement, as political police to enforce his semi-Bundist politics and indirectly therefore, as a weapon of his own form of Jewish chauvinism. He also denounces us as anti-Semitic for our refusal to express fulsome approval for the politics of the Jewish Bund, the separatist Jewish socialist party in early-to-mid 20th Century Russia and Poland. Greenstein is hysterical about this opposition to special Jewish groups; he attributes it to our supposed affection for Gilad Atzmon, who has made sometimes correct, sometimes flawed and highly confused, criticisms of these groups.

But Greenstein’s dishonesty is exposed by a simple page search. Search for the word ‘Lenin’ on the page of his voluminous alphabet soup denunciation. You get zero results. The name does not appear. This exposes his mendacity and his anti-communism. For anyone who has read our polemics about Greenstein’s neo-Bundism can see our views are orthodox Marxism, and come from Lenin. We have quoted and referred to Lenin repeatedly. Lenin considered the Bund’s views as a form of semi-Zionism. In fact the proscription of criticism of Jews-only groups, in the guise of combatting a fictional ‘anti-semitism’, amounts to proscribing Leninism and Leninist criticisms of Jewish separatism and semi-separatism.

Which is particularly oppressive since the bulk of Jews, as noted earlier, under Zionist leadership, now play a definable role as material and ideological oppressors of the Palestinians. What we are dealing with from Greenstein and co. is Jewish paternalism, and the restriction of freedom of thought and analysis in the Palestine solidarity movement in the cause of a kind of Jewish communalism and social chauvinism. It is also bitterly ironic that the organisational muscle for running this purge comes from the CPGB, whose original publication was titled The Leninist. Clearly not any more!

Labour Against the Witchhunt (sic!), by proscribing these positions critical of Zionist racism and Jewish communalism, has just defined itself as an organisation that craps on the Palestinians by forbidding Marxist analysis of a key mechanism of their oppression. It has taken sides – with the Adelsons, Fosters, Levys etc, and their many rank-and-file Jewish-Zionist supporters against the Palestinians.