Sweden: Only Class Struggle Will Stop the Far Right!

There is no question about the fact that there has been an upsurge in class struggle and combative mood in the broader layers of the labour movement rank and file in Sweden, as an answer to a social democracy hellbent on continuing the policies from the former alliance government.

As is the case often with reality, it is more complicated than theories can explain, but the proof of the pudding is in the eating and we must look soberly at a reality where different tendencies are at play.

The far right is on the advance in Sweden. Much can happen before the next general elections, but the Swedish Democrats, a right-wing populist party with roots in the openly Nazi Nordic Reich party is now the second largest party in the polls. This is a party that in the 90s wanted a ban on hip-hop, who wanted to sterilise adopted children and which has one of its leading members, Björn Söder, as vice speaker of the house, a man who just a few years ago, talked about what he called the “Holocaust industry” in an anti-Semitic way. [1] 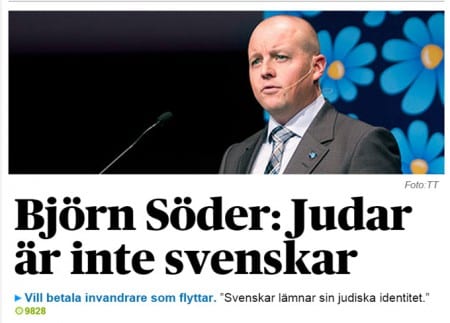 In an article published yesterday (14 December 2014), Dagens Nyheter attributed to the Swedish Democrats and Riksdag’s second vice-speaker, Björn Söder, a separate quote. The headlines headed “Björn Söder: Jews are not Swedes”. The written statement is a fabrication of the interview and has now led to resignation to Söder.

Björn Söder was interviewed in DN in an article entitled ” The Smiling Nationalism “.

In the interview, Söder states that some ethnic minorities who moved to other countries primarily identify with their minority group, even though they sometimes lived for a long time. Söder emphasizes, however, that anyone who wants to become Swedes can take on Swedish culture and get a Swedish identity.

The inscription “Björn Söder: Judges is not Swedes” was never expressed during the interview but was created by DN’s runners. DN writes that they asked the question:

Can not you be both Jew and Swedish, at the same time?

“I think most of the Jewish origins who have become Swedes leave their Jewish identity. But if they do not, that does not have to be a problem. You must distinguish citizenship and nationality. They can still be Swedish citizens and live in Sweden. Sami and Jews have lived in Sweden for a long time.

The felicitation has now caused violent misunderstandings in social media and DN has been looking at several politicians who said they wanted to see Söder’s departure after taking part in DN’s fabrication.

Retirement demands also come from Jewish associations such as the Lena Posner Körösi of the Jewish Council, who, while distancing from the wrong statement, demands special rights for Jews in Sweden and calls for government funds to “preserve Jewish ethnic and cultural specialties.”

The Social Democrats are losing credibility in the polls, as are the Greens, who championed a humane take on immigration, but who were overrun by the social democrats and have agreed to compromise after compromise in order to save the government.

More than so, the Swedish Democrats are moving in on some traditionally social democratic voters with a populist rhetoric. But one has only to look at the policies they’re voting for in the Riksdag to see where their priorities are. They’re the spearhead of reaction. Everything the alliance want, the Swedish Democrats want more of.

It is, to many old labour movement activists with their hearts in the right place, shocking to see a former Nazi party as the second largest party and moving in on working-class voters.

Yes, it is important to stop the anti-labour policies of the Alliance and their mad dog, the Swedish Democrats, but one should remember that every single party in the Riksdag is committed to the capitalist system. The Social Democrats are a workers’ party due to its ties to the unions, but it is a bourgeois workers’ party, a party which operates by pushing the politics of the country in such a direction that is most pleasing to the bosses, whilst not losing its working-class voters.

So, all parties are committed to capitalism. They are all, more or less, ready to implement right-wing policies, it’s just, as a Swedish saying goes, a question of temperatures in hell. But yes, it is important that the anti-worker agenda of the Swedish Democrats are pushed back, it is just a question of how.

Let’s face it, the left and the Social Democrats aren’t going to do it unless we apply force from below towards them. Fantasising about a Swedish Podemos or Syriza is utopian, as we already have the Left Party in the Riksdag and in any case, the emergence of a militant class party will only come about through a massive increase in class consciousness, after class battles. A party is born in the struggle, not from electoral blocs or proclamations.

But, as I said, there are different tendencies at play. The rank and file of the Swedish working class are committed to fighting. We see the dock workers, we see the bin men and we see the discontent with the state public health and the right for capitalists to turn tax money into private profits.

The fact that Social Democrats aren’t growing in relation to the upsurge in class struggle, seems like an indicator that,

The massive Swedish public sector, which is being dismantled, was built on the struggles of the class; Löfven tries to turn the party into an election machine independent of the rank and file. We see the drastic loss in support, the former glories of the alliance and now, the offensive of the far right.

But everything points to the rank and file. We can’t proclaim a party out of thin air. Decades of reformist hegemony in the labour movement, not at least depending on the Left Party giving up on its union work (that being said, there are many Left Party unionists in a personal capacity), means that workers are reluctant to listen to us and believe we want to implement a Northern Korea in Sweden or that we slander Social Democratic trade unionists as social fascists, the outcome of the dominance of Stalinism on the Swedish left wing.

In order to grow, in order to create the independent labour party we want, we have to orientate towards the masses and show our colleagues that we are ready to fight and that we really want nothing that isn’t in the interests of all working people. Sure, intellectuals can join the fight and there can be no revolutionary movement without revolutionary theory, but the working class must lead the struggle. It must be a workers’ party and as such, it must be born from the struggles and from realising that the Left Party and the social democrats aren’t there to help us.

The Left Party likes to position itself as the guarantee for leftist policies in the Riksdag and as the only consistent fighter against the Swedish Democrats.

We will call on people to vote for the Left Party, but we won’t give up. We’ll keep on fighting the bosses and their rightist agents at the same time as the left is in the Riksdag. Only class struggle will advance, not just the creation of an independent labour party, but also the fight against the far right. Through class struggle returning, the right will lose bottle and fizzle out.

But we will also tell our comrades in the Left Party that we support them only if they support us. There can be no illusions sown in the party as an agent for socialism. Socialism will come about through the independent organising of the class itself under a party and through workers’ councils and workers’ militias. But we can demand that they fight against the right and all anti-worker legislation.

In any case, the task for today is orientating towards the struggles of the class and intervening with the program of the Fourth International, the world party of socialist revolution. The Riksdag is also important and we support the Left Party, but the workplaces, the hospitals threatened with closure and the asylum hostels, as well as the hostels for the growing numbers of homeless people are where we’ll start to fight.

It is easy to be demoralised by the theatre of politics in Sweden today, but as Leon Trotsky said in defence of revolutionary optimism:

Workers are losing their illusions in the Riksdag, if we fight side by side with them, we can aid them regain their belief in themselves!

2014, Top Ten Global Anti-Semitic/Anti-Israeli Incidents. No 6: The Jerusalem Post reported that Björn Söder, Sweden Democrats Party politician declared in an interview, “Most [people] of Jewish origin who have become Swedes leave their Jewish identity,” and that it is important to distinguish between “citizenship and nationhood.” Lena Posner Körösi, of the Official Council of Jewish Communities in Sweden told The Guardian, Söder’s statements were “exactly like in 1930s Germany” and that they constitute, “good old right-wing anti-Semitism.”

BJÖRN SÖDER, Jerusalem Post, 01/05/2015, Sweden Democrats reject anti-Semitism, “In a biased article in one of Sweden’s largest newspapers, Dagens Nyheter (DN: Daily News), some of my statements were dramatically taken out of context to erroneously credit me with opinions that do not correspond with reality. Politically biased journalists and political opponents have further distorted the statements, resulting in a presentation virtually the complete opposite of my actual statements and opinions. This is now distributed in the international press, such as in the Post, which therefore necessitates a clarification on my part.” http://www.jpost.com/printarticle.aspx?id=386751

The Rights of Nations to Self-determination: Catalonia’s Referendum and the Spanish State »
« One year before the general elections in Sweden: An upsurge in class struggle