A Marxist History of Ireland in three parts, by Gerry Downing

Part 1. Developments in the Irish working class under British colonial oppression to 1916

Concentrating on the political developments under Jim Larkin and James Connolly, the 1906 foundation of Sinn Fein under Arthur Griffiths and the great industrial and political struggle that was the Dublin Lockout.

The magazine exploding in the Four Courts, hit by artillery pieces which Churchill gave Collins to that purpose. He even offered to paint them green! The Four Courts along the River Liffey quayside. The building was occupied by anti-treaty forces during the Civil War, whom the National Army subsequently bombarded into surrender. The Irish national archives in the buildings were destroyed in the subsequent fire. The building was badly damaged but was fully restored after the war.

The defeat of the Dublin Lockout by the hand of the British TUC signalled the end of the Great Unrest in Britain In January 1914 the Triple Alliance of Industrial unions was formed of transport, railway men and miners (Miners Federation of Great Britain, the National Union of Railwaymen and the National Transport Workers’ Federation). The unspoken purpose of the leadership was to defend the interests of British capitalism and to defeat the huge industrial unrest in Britain itself. This they succeeded in doing and they then acted are recruiting sergeants for the killing fields of Flanders and the Somme.

Gerry Conlon of the Guildford 4 flanked by his two sisters on his release from prison in 1989. With the Birmingham 6 they were political hostages for a decade and a half to intimidated the Irish community in Britain and British socialists who supported Troops Out of Ireland.

Part 3. 1923 to present, including “The Troubles”, the Good Friday Agreement etc.

We will cover the rise of Eammon de Valera from 1927 and Eoin Duffy’s Blue Shirts, the Republican Congress of 1934 and Frank Ryan, the Economic War and WWII and the execution of Barns and McCormack.

And the Civil Rights Movement of 1969, Internment and the Ballymurphy massacre of 1971 and Bloody Sunday 1972. The split in the IRA between the Provos and the Officials, the INLA and the Irish Republican Socialist Party and the bombing campaign in Ireland and Britain. 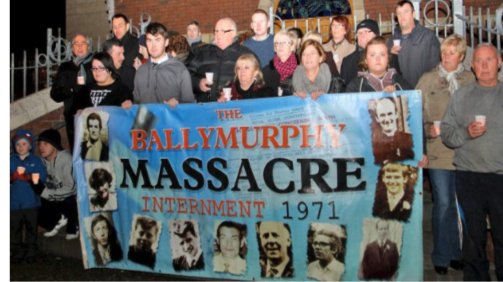 The hounding of Ken Livingstone and Jackie Walker on bogus charges of antisemitism by the Labour right and the mass media led by the Zionist Embassy is one of the most shameful chapters in British history.

The Struggle for the Labour Party

Entrance free, a collection will be held. Refreshments available at the downstairs bar.

PRESS RELEASE: Tribunal to determine Deliveroo riders’ employment status in May hearings »
« A reply to Eric Blanc’s “A Revolutionary Line of March”