There’s a war going on in feminism. Played out over Twitter and the blogosphere, within the minefield of intersectionality, radical feminists (radfems) and trans activists are, on a daily basis, knocking lumps out of each other. Each accuses the other of various forms of misogyny, hate-speech, transmisogyny, lesbophobia and protecting the hetero-normative-patriarchal-hierarchy. Does your head hurt yet? Well this guide hopes to be an antidote for what some are calling ‘gender-fatigue’.

Obama has issued an edict declaring that students in America should be allowed to use the bathroom which corresponds to what they identify as their own gender as opposed to the gender given on their birth certificates. Feminists were furious, but it was two tribes of feminists against one another. This follows on from similar moves in Canada where one transwoman took to social media posting photos of herself doing her make-up in public toilets whilst men urinated behind her to highlight the absurdity of this.

The radfems in turn spoke up to say that allowing ‘men’ or transwomen into female bathrooms put women, and young girls, at risk of sexual assault. Wasn’t that very reason we have separate WCs in the first place? WELL…

TERF, came the cry from trans activists, a blackball acronym stranding for ‘trans exclusionary radical feminist’. Misogyny, replied the TERFs, concluding that they were being targeted because they’re outspoken women defending other women.

Most debate around trans matters focuses on the body of the transwoman, someone who has transitioned from mate to female.

Trans people and their allies disagree, some going as far to even claim that sex is a social construct, and demand they are granted recognition as complete women. So on the one hand we have biological-determinism, and on the other socially constructed gender, with all the malleability that would have to entail.

Firewoman, a radfem blogger, has it that transwomen are really still male, a gender essentialist argument which places the source of all womanhood at birth. Moreover, as a lesbian she thinks that transwomen are actually just straight men who inauthentically approbate lesbianism.

Some radfems insist on calling transwomen by their given male name whilst all trans activists will use a person’s chosen name. Where the issue gets really serious however is not when a self-identifying woman is called a man’s name, or when they are thrown out of a women’s toilet, but when we look at the suicide rate amongst trans people. It is disproportionately high when compared with the rest of the population, and seems to, in the majority of circumstances, occur amongst young people whose parents cannot accept their transition. The TERF community seem almost willingly blind to the fact that many young trans people would rather die than live as a gender they don’t identify with.

But to revisit biological determinism as put forward by radfems, surely this way of approaching gender and sex has a major flaw. If advances in technology cannot be used to transition someone from one sex to another, there is a parallel argument to be made that advances in technology should also not be used to provide women with safe abortions. Isn’t that also a skewing of ‘nature’? Doesn’t the foetus then possess some innate characteristic that would entitle it to be preserved?

I’ve yet to encounter any serious feminist who stands against abortion rights; it’s almost a shibboleth for feminism, yet the illogical argument that one state can be altered, pregnancy, whilst the other, sex, cannot, doesn’t seem to faze the radfem mentality.

That said, there is a certain McCarthyism prevalent within how trans activists go about defending their comrades. Johann Hari wrote a scathing piece which correctly identified this trend making the essential point that once identified as a TERF you are targeted by a hugely active and very vocal sections of activists. It reduced the renowned scholar Mary Beard to tears when she, apparently inadvertently, signed a letter which was identified as transphobic. Peter Tatchell likewise has been blackballed recently, along with Julie Bindel whose gender essentialist arguments have caused outrage amongst trans people and their allies.

The strongest argument advanced by radfems is the idea that male privilege advances transwomen. The term is used within intersectionality which has it that if you are male you have certain innate advantages over women. Likewise if you are white, able-bodied, heterosexual etc. All these points intersect, meaning that the lived experience of a black women is multi-facetted as she must put up with two forms of oppression, these based on her skin colour and gender.

When it comes to trans issues the radfem contingent argue that transwomen are inordinately protected in law and have made such advancements in a relatively short period of time (in comparison in more traditional women’s movements) because they are really men, and have male privilege. 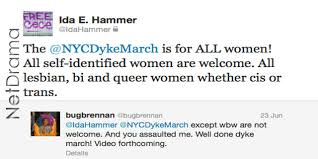 Cisgendered privilege is used to counter this argument; if you were born to a sex which corresponds to the later gender role you will perform, i.e. female and woman, you have the advantage over someone who wasn’t. That many trans people have experienced being attacked in the street by complete strangers supports this argument.

It might also be suggested that by abandoning manhood, you voluntarily relinquish male privilege. Moreover, the radfems have the ear of reactionary senators..

On 25 May 2016 42 Republican members of Congress joined 180 Democrats to vote through Obama’s transgender directive that transwomen can use the bathroom of their choice. No Democrat voted against; all 195 noes were Republicans. Obama’s directive is being strongly challenged by many states.

Some have suggested that TERFs constitute a hate group, are disproportionately listened to as the voice of feminism and use their influence to pass into law various measures which are transphobic.

The test of that will be whether Obama can really see through his edict and allow trans students in America to use the bathroom of their choice. ▲