Perspectives for the British Class Struggle

The most likely scenario now is that Corbyn will win the Labour Party leadership with up to 90% of the vote. The PLP right wingers will set up their alternative Labour in parliament and try to seize the party name and assets via the courts assisted by NEC bureaucratic monsters like Iain McNichol and other TU right wingers. A split in the TUC is now looming with the GMB nomination of Owen Smith.

This will alienate even wider layers of Labour supporters from these traitors and membership will mushroom towards a million.

The motivation of the PLP traitors will become ever clearer because millionaire backers will pile in to fund their court cases and offer the prospect of retaining and enhancing the gravy train of lucrative directorships of hedge fund firms, banks and finance houses in the City of London and elsewhere. This was and still is the career aspirations of the vast majority of Blairite and Brownite MPs.

A great opportunity to politically educate the vanguard

All this will have the great progressive effect of politically educating ever wider layers of the working class in the corruption of their own official leaders in Labour and right wing TU bureaucracy up to now provided we can reach them with the message. This will create a great political thirst for honesty and integrity in their leadership and they will seek out such leaders and/or stand themselves on these so basic principles. And surely Corbyn represents that in the first place. A new vanguard layer will learn how to lead and truly represent the whole working-class, vitally with an internationalist perspective.

No longer is Mandelson 2012 attitude about being, “intensely relaxed about people getting filthy rich as long as they pay their taxes” OK. The obscene privileges of capitalism and its corrupt defenders still hold sway but the trickle down theory and ‘we are all in it together’  is seen by ever wider layers as lying propaganda. They now see the chance of doing something about it.

The industrial class struggle will resume at the higher political level achieved in this absolutely fascinating political and ideological battle over the leadership of Labour. Already the RMT strikes indicate the way forward.

Now the ghosts of Lenin and Trotsky are beginning to haunt the dreams of Watson and his cronies. And real revolutionary socialists will seek to make that nightmare for capitalism and its representatives in the Labour Party a reality. Watson is absolutely correct to fear this.

Joe Stalin ballot rigged the 13th Conference of the Bolsheviks in January 1924 as Lenin lay dying. Despite the fact that Trotsky’s supporters had mass support in the party cells only a few made it to the conference. “Not who you vote for but who counts the votes” made its first appearance here.

Bukharin and Stalin launched the nationalist theory of socialism in a single country. By the end of 1924 Stalin had replaced the passage in The Foundations of Leninism that said it was impossible with the one that said it was entirely possible (“can and must”). He lied about and distorted the writings of Lenin to ‘prove’ that the Bolsheviks had always held this anti Marxist position.

After Lenin’s death Stalin and Zinoviev initiated the Lenin Levy which opened the party up to all comers in order to swamp it with careerist and unprincipled opportunists attracted by the perks of power in circumstances of hunger and isolation. The purpose was to marginalise the revolutionaries and to rehabilitate the fatalistic objectivism of the German Social Democrats historically typified by Karl Kautsky. Trotskyism is a word invented by Zinoviev in January 1924.

At this time also Zinoviev began furiously ballot rigging internationally to pack the Fifth Congress of the Comintern. His “Bolshevisation” of the international communist parties was in reality a purge of Lenin and Trotsky supporters and all others who wanted to make the Russian Revolution a world revolution. 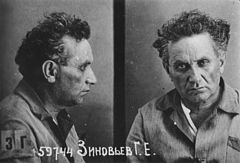 NKVD mugshot of Zinoviev in 1936 as the old Bolshevik  awaited execution by Stalin’s murder machine in the Great Purges.

Ed Miliband, Iain McNichol and the bureaucracy of Labour and the TU leaders tried the same tactic following the defeat of 2010. Rationalising that defeat occurred because they were too left wing they accepted the Collins Report in February 2014. This initiated one person one vote and a £3 supporters vote for the Labour party leader, thinking this influx of democracy could be easily controlled by a mass media campaign, who would tell them who to vote for and they would do as they were told. They didn’t.

They learned this tactic from the American Primary system and from that great master of bureaucratic manoeuvres, Joe Stalin. But Stalin’s manoeuvres worked in 1924 in conditions of the ebb tide of the Russian Revolution and the decisive defeat of the German revolution of 1918 to 1923 the previous year. In 2015 and 2016 the exact same tactics has the opposite effect.

Now the absolutely desperate manoeuvres to retrieve the situation only makes it worse for them. Because now is not the ebb tide of the political class struggle, now the genie of the working class is out of the containing bottle of the bureaucratic straight jacket (to mix a metaphor).

How those Labour right wing MPs must be kicking themselves for lending their nomination votes to Corbyn in the interests of “democracy”! He made it with only minutes to spare.

Great times to be alive. McNicol and Watson are dead men walking. And the right wing Labour traitors in the PLP will be deselected if they do not split before then. It is becoming ever clearer to the vanguard that they really do have to change horses in mid steam; they understand now they cannot reach the dry land of socialism on the horse of corrupt Blairism. They do not yet understand the horse of revolution not reformism is needed but are now more open to the suggestion following Tom Watson’s attack on Trotskyism.