France: Protests against the El Kohmri law (in English and French)

The CGT trade union is by far the most important labour movement organisation in this movement.

Protests against the El Kohmri law reveal the following situation:

There is a union revival still insufficient but constantly coming from the most militant section of the working class, and it is rapidly a developing movement beginning in the recent past.

The Nuits Débout (White Nights) (above) appeared and quickly enough disappeared. They represent a low form of proletarian consciousness, an expression of the political outlook of the petty bourgeois (even though they deny they are doing “politics” ). Without any real perspective, represented anything and everything before disappearing. “Intellectuals” who have joined, did not interest the workers. Their audience consists of young people of childish political awareness, leftist activists and / or quite disoriented anarchists; intellectuals in search of fame. Their action is limited to talking (or “discussing”) about everything and nothing . No real action or organization has come from them. Their weak balance sheet, (the government and the medias encourages it not so secretly) is perfectly zero. Ex nihilo nihil.

The “thugs” (which we no longer distinguish from provocative people sent by the Prefecture who are ingenuous or unhinged political children) are a constant feature at demos everywhere and are of a dual character, some of them play into the hands of the government and others learn the basics of street fighting through practice. It almost always results that learning is the most important factor. Today fights with the police are caused by police provocations after the demonstrations and have absolutely no effect on either the next mobilizations (there were several demonstrations after “thugs” demos and influence increased, instead of decreasing as expected by the government. Similarly to the public that shows a 70% rejection of the Labour Law and of the Government).

The National Front, which has developed a populist nationalist demagogy and even went so far as to take a few slogans from some left parties against the EU and the ‘Euro’, cannot say a word in front of such a proletarian reaction against a law that favours the bosses, but they continue to support the perspective of the bourgeois order but in a muted way. They seek the support of the   bosses. For the moment they have left the public stage except to send out missives demanding “more order.” Their leader Marine Le Pen does not show up anywhere.

The Socialist Party are losing more workers’ votes and even within their parliamentary majority called “La Fronde” are to be found some with “concerns” and proposals to change the most reactionary aspects of the law. [i] Valls, the Prime Minister, immediately rejected the proposals of that internal “opposition” which demonstrated their political cowardice in refusing to call for a vote of censure with the right to prevent the law from passing. Valls but now speaks of “ameliorations” to the Act. He is trying, to no avail, to weaken the workers’ movement.

This government is one of the most unpopular and weakest that bourgeois France has ever known and it shows. It hangs by a slim thread and the Labor movement and student are about to take their knife to it.

Application of article 49-3 gave a boost to the militancy of the workers, which had never completely gone away. The government tried to keep the movement confined within a parliamentary perspective, within the system. The trade union leaders have agreed to play that game.

The Communist Party has maintained a position in the middle, anticipating what will be needed for its future agreements with the Socialist Party. 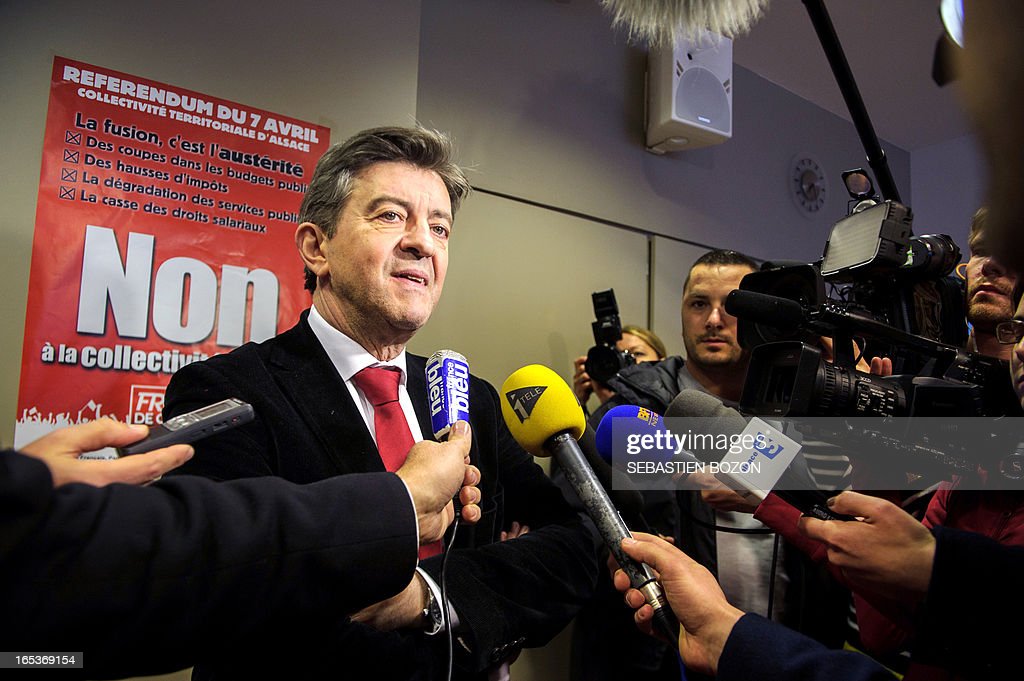 Jean-Lus Mélenchon (above), the Left Party leader, [‘Front de Gauche’ (PG)] the only nationally known political figure to the left of the PS and the PCF, has played a good game and thus has gained the political benefit of the movement. And this almost without saying a word and almost without showing up except for very brief appearance before the media and demonstrations.

Without a political platform there is simply cannot be a “convergence of struggles.” This convergence is called by most leftists who believe they are masters on Marxism but make only variants of the anarcho-syndicalism, which puts everything on the “apolitical” action of the class by means of class struggle without “dirty” politics. Or by making a “policy” that matches their sectarian goals. Each dealing with “building a revolutionary communist party,” either you got clear sky or storm, others would “build a communist party” without being able to agree on anything.

The masses, whose instincts are to seek a better path than those sectarian options, look for policy options to take them forward.

All the political movements offer to the struggle is the slogan “no to the Labour Law.” This is manifestly insufficient and government attacks against the pickets, who have found an answer of strikes that paralyzes fuel deposits and with extensions to the railways, dockers, planes and public transport as well as electricity production and distribution, has put the direction of the union movement and the political issue in the hands of the union leadership (CGT and FO but mainly CGT which is by far the most important).

Union leaders cannot accept Article 2 of the Law which short circuit them completely leaving the boss alone to deal with the workers in each workplace and renders national trade negotiated by union organizations simply empty shells.

But the Unions do not pass slogans against the government. They hide behind their “specific duties”, that is it, purely trade union slogans.

As it is, the only possible policy option is offered by Mélenchon makes radical socialist leftist speeches.  Those who cannot bear Hollande and cannot vote right, are now preparing themselves to vote for him. Opinion polls put him close to the Socialist candidate Hollande. So near that, in next year’s presidential election,  he can overtake  him or create a situation that puts Hollande in the third place.

What is wrong with the non-FN Right? They see the rise of a powerful political movement supported by workers’ struggle that could develop further, coming from the struggle against the Labour Act. There are some opportunities today in what is happening because the strength of the proletarian dynamic is creating the conditions for the emergence of a genuine proletarian political movement. Its implementation will depend upon lucid militants capable of achieving this.

What is the problem of the FN? The movement against the Labour Act unmasks their populist demagogy. They will win only a Pyrrhic victory by waiting the demise of the government. They hope to win over those who are is demoralised and so triumph in future elections. And this simply because they are also an expression of the demoralization of the working class and workers in general who have no prospect because they lack their own policy. But today, feeling the hesitations and weakness of the government, they are simply retreating into legalism.

What is the problem of Holland? To ride the rising tide, that of the “subversives” as his ministers have called it. The tide which is caused by these worker’s protest is of such an extent that it surprises everyone. This tide, which focuses not just on an open rejection and a manifest, massive rejection of the Labour Law, is also the expression of all the resentment repressed for decades after countless successful attacks of the bourgeoisie against the rights, assets, living conditions and wages of workers.

This wave that began with a call by students and that was followed by the trade unions. They followed because they were directly threatened by the Act and pushed by a base that, by force of the impact of the crisis and of the employer attacks, was pushed to the left. This wave, therefore, has maintained itself constantly on a large scale for two months throughout the country and have followed by more and greater demos events after the passage of the Act by through Parliament without discussion using obscure article of the Constitution. That has increased further rejection by the working class and students in even more demonstrators.

This has seen the entry of the more militant sectors of the workers into strike struggle in strategic areas: distribution and production of fuel, electricity, ports, transport aircraft. Is the entry of the most “protected” battalions and the highest paid of the working class (some talk of the labour aristocracy) and the other most militant sectors of the whole class. The most precarious sectors and the lowest paid (a figure on the increase in France) do not dare to strike yet; they are not yet willing to risks their jobs.

As usual the class comes into battle in sections and takes these steps forward today without direction or political leadership. It is this lack of sure political direction that the most conscious political activists in the movement fear most. They fear a defeat or a wobbly compromise by lack of an appropriate policy direction. The current scenario is the golden dream of anarchists: a powerful labour movement that sweeps a government aside without political direction.

This possibility exists if the movement continues its momentum, but it is quite possible that it would be channeled into electoral tracks. One of the most interesting phenomena of this movement is its international contagion. Thus Belgian railway workers and others are beginning to see and take its example.

CRS police removed a blockade outside the Fos-sur-Mer refinery in Marseille.

These notes were written after the demo from Thursday 26 May and they reflect also an increase in attendance as well as in the confidence of protesters. The movement seems to take an even stronger momentum and there were discussions among the political organizations of the need to increase a political content of the movement to demand the “resignation of Valls” the Prime Minister who sent the militarized police (CRS) against the Fos-sur-Mer workers.

The movement lacks political direction and for Marxists, the only rejection of the Labour Act is still too limited. Already the militants of the Trotskyist group “Revolution” requests an “Out of the System!” slogan. Maybe we should start first by asking the ousting of the Prime Minister, because the masses, yet politically attached to bourgeois legality, won’t go so far without an intermediate step. This is a tactical question that can be discussed, but obviously the slogan “No to the Labour Law!” is insufficient.

[i] The Fronde was a series of civil wars in France between 1648 and 1653, occurring in the midst of the Franco-Spanish War, which had begun in 1635. The king confronted the combined opposition of the princes, the nobility, the law courts (parlements), and most of the French people, and yet won out in the end. It consolidated the Absolute Monarchy of Louis IVX. The word fronde means sling, which Parisian crowds used to smash the windows of supporters of Cardinal Mazarin. It took its name from a game Parisian children would play to defy the civil authorities. (From Wiki)

Victory to the defenders of Fallujah! »
« Parallels Between Israel and 1930s Germany – Antiwar.com Original by — Antiwar.com

One thought on “France: Protests against the El Kohmri law (in English and French)”