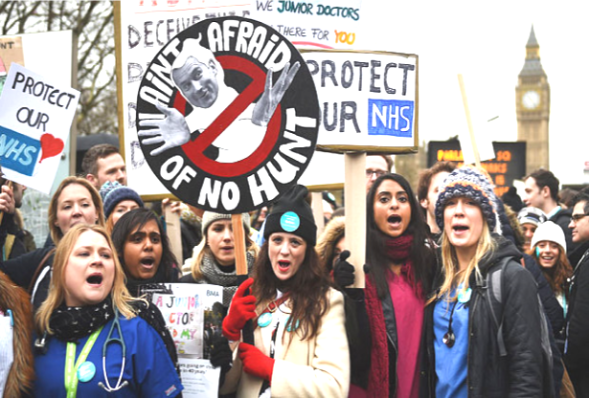 Since this article was written the Tories have partially backed down on compulsory academisation and has agreed to reopen talks with the junior hospital doctors. But the so-called U-turns are only partial, the main thrust of the attacks remain. The doctors’ talks are on a limited agenda of Saturday and overtime working. Junior doctors are in dispute over far more issues and the academisation agenda proceeds. The apparent cvollapse by the doctors’ leaders may yet be rejected by the vote of the membership.

On Tuesday and Wednesday the 26th and 27th April junior doctors in the NHS were on strike against health minister Jeremy Hunt’s determination to impose a contract on them that would make their unsafe and unfair working conditions, even more unsafe and even more unfair. It was the fifth time in four months that Britain’s 50,000 plus junior doctors had been out on strike against these austerity-led proposals that are part and parcel of the Tory governments attacks on the NHS and ordinary working people as a whole.

Having been provoked into strike action five times by the government it was the first time that they had not provided accident and emergency cover. This meant that this service was provided by consultants. A fact that the government and its well-heeled backers in the Tory press didn’t go out of their way to make clear. On top of this the government and those same media outlets have made ludicrous claims that the junior doctors and their organisation, the British Medical Association, are trying to topple the government.

Most thinking members of the public support the junior doctors and are appalled at the tax evading antics of the super-rich (including very prominent members of the Tory government). They would surely like to see this corrupt cabal toppled. However to pretend that the agenda of the junior doctors and the BMA is to topple the government is beyond farce and has done nothing but stiffen the resolve of those taking part in the strike action.

Although the image of a politically motivated workforce putting patients’ lives at risk in the cause of bringing down the government may have had a superficial impact on some of the most backward sections of society who are apt to believe the first and the easiest thing they are told, even the establishment carefully weighted opinion polls indicate that there are a mere 57% of the public who continue to give their backing to the doctors. Those, who clearly see through this blatant propaganda, will have their resolve to win hardened. When more and more of those who have initially fallen for this nonsense realise that they have been lied to, yet again, those guilty of this breath taking deceit will lose what last vestiges of trust remain.
Perhaps it is worth re-stating a few facts
● There are 54,000 junior doctors. With the exception of consultants and GP’s all other doctors are referred to as junior doctors.
● 98% of them voted to reject the new contract as unsafe and unfair. If implemented it means working more nights and weekends, with less rest and less pay making the service more dangerous for doctors and patients alike.
● Hospitals are currently required to monitor how many hours doctors are working. The contracts that the government are going to impose removes that requirement.
● The doctors are not fighting for a pay rise. At present, after five years training a doctor’s basic wage is £22,636. Clearly the already dangerous number and unsocial hours junior doctors work means that sum is enhanced. However under the new contracts some doctors stand to lose up to £7,500 a year.
● It is estimated that the NHS needs another 6,000 doctors if it to remain still just to cope with the extra demand. The reality is that if the government get away with this doctors will be leaving the NHS in their droves.

On the picket line at Lewisham a junior doctor called Sarah explained to Socialist Fight that junior doctors are already providing a seven day, twenty four hour service, contrary to the picture that the government are trying to paint by claiming they are trying to introduce a seven day twenty four hour service. She went on to point out that junior doctors were already at breaking point. “It is absolutely clear that doctors are spread too thin”.

The doctor went on to explain that, “more investment was needed to pay for more staff to cope with increasing workloads”. Sarah also pointed out that the new contract that Jeremy Hunt was attempting to impose was riddled with gender inequality, “for example pay progression being affected by female doctors on maternity leave”.

When Sarah was asked about support from other NHS unions and the labour movement in general she explained that if the doctors were defeated all groups in the NHS would be picked off one by one so there was an urgent need for solidarity. She also explained the fantastic support of the teachers from the NUT was the sort of support that was needed. The teachers had held spontaneous joint demonstrations with the doctors a few night previously in central London.

The teachers issue was the compulsory academisation of schools but the teachers instinctively knew that although this is two battles it is all part of one war against austerity.

When asked about support from the Labour party Sarah said that she did not know a great deal about labour politicians but that the backing that the doctors had received from Jeremy Corbyn had been first class.
Unions should be balloting for national action on their own issues, like the proposed compulsory academisation of schools local authority cuts or pay issues and ensuring any industrial action is coordinated with the doctors strike action.

There is total disgust with the antics of the ruling elite and their lame duck Tory government and massive support for the doctors. If the anti-austerity movement is to forward it is clear what action needs to be taken. ▲