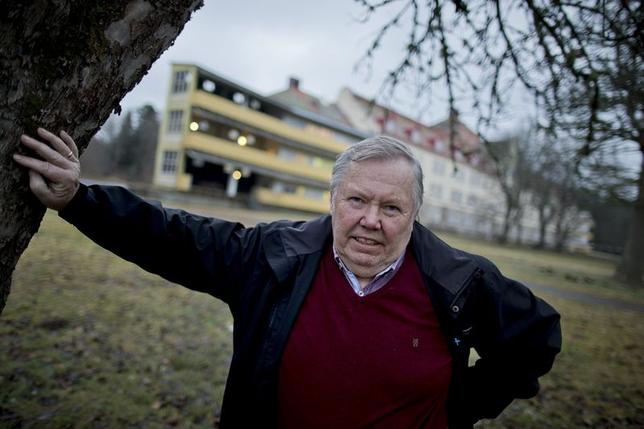 Multi-millionaire Bert Karlsson, making a fortune from providing housing for refugees paid by tax money. In this Dec. 19, 2013 file picture Swedish entrepreneur Bert Karlsson poses outside his refugee centre in an old sanatorium in Stora Ekeberg, near Skara, Sweden. People crammed into boats and trekking across borders have become the dominant images of Europe’s migrant crisis. In the shadows, however, there are those who are profiting, among them Karlsson. (Adam Ihse/TT via AP, file) SWEDEN OUT

Apparently, according to a nine o’clock news on the telly survey, there is a huge opinion within the Moderates (Swedish tories) for giving immigrants lower starting wages. 88% of those surveyed replied that they support such a proposition.

Propositions like these really ought to make one despair, but the truth is that the EU and the spineless Swedish Riksdag (parliament) have launched so many attacks on the fundamental solidarity of the labour movement that nothings comes as a shocker now.
First, we had ships sailing under third world country flags with third world country labour laws. Then we joined the EU and all of a sudden, the project which the social democrats had pushed as “Yes for the jobs!” got to a situation where workers from other EU countries are brought here to work without collective bargaining, without union organisation and for starvation wages.

The free movement has another dirty underbelly too. Trafficking. Young women are brought to Sweden for prostitution against their will and are exploited beyond imagination.

But this a new level of shocking, for what is it really that the moderates are saying? They’re saying that we shall treat unequally ethnic Swedes and immigrants on the labour market. The moderates are not saying openly what many of these reactionaries probably wouldn’t have any qualms about saying, that it is about colour. But give ’em a few years and they will most probably come out openly as the racists most of them are deep inside of them, cos what is racism all about apart from dividing the working class? If ethnically Swedish workers accept a world view where they have more in common with the bosses than with immigrant workers, then they’d already sold out and destroyed everything from wage-bargaining to class struggle.

The system of unequal pay and unequal rights for different ethnic groups have been tried out before. Remember the signs in South Africa, “Whites only”, “Coloureds only”. That is what the moderates seek to introduce now, if not in theory, then well in practice. Segregation is already a fact with the irresponsible housing politics and now it’s open for the reactionaries to speed ahead towards giving Swedes one wage and immigrated labour another.

Fact is that you can come up with more parallels than apartheid. You can compare it to slavery in the USA.

The slaves in the USA got a little hut to live in and some food in exchange for hard labour. This is what the moderates want in Sweden now.

“But stop there, Mr communist, oh, no, we don’t want slavery, we just want what’s best for the immigrants and it’s lunacy to compare that with out policies!” No.

It will probably not be ICA (the large chain of supermarkets in Sweden) that will bring here the immigrants from the third world, who will have to stand at the checkout and stuff plastic bags for the customers, just to go home to a small flat in a segregated neighbourhood for supper and then have money for nothing else. But it wasn’t the slave owners themselves who brought the slaves from Africa either, they arrived on slave-ships from private profiteers. If lower wages pays off for the bosses, then we consider it a full possibility that the bandits who make huge profits from taking refugees over the Mediterranean in boats that seem to be falling apart will suddenly find themselves in competition with Swedish capitalism. It might be the next project for multi-millionaire Bert Karlsson (who is already making a fortune from providing housing for refugees paid by tax money), taking refugees safely across the sea, so that they may work for slave-wages in Sweden.

The proposition of the moderates stink and it’s up to the labour movement to fight it. In the long run, this will not just affect the immigrated labour force, but also the domestic, this as it first of all divides the labour movement and secondly push real wages lower even for “the Swedes” when there is cheap labour to compete with.

Remember, the bosses are rich only because we work for them and they can make outrageous profits from buying our labour for cheaper and cheaper costs. Working today is forced upon you and not a pleasure. Us communists want everyone in labour, ethnic Swedes, as well as immigrants.

Unemployment is not a natural law, but a side effect from the system where us workers compete for the jobs. What we communists see before us is a libertarian society without classes or state power, where people work according to means and receives according to needs, everything regulated and with a plan for the economy.

As long as we got capitalism, we will see downfalls and pitfalls until you finally can’t save this earth. We will see more of these monstrous propositions from the moderates and media won’t analyse it, but will use Trump in the USA as a scarecrow, whereas the real far right in Sweden can push extremely racist policies under the guise of caring for the poor people they’re ready to super-exploit.

No, chuck the right-wing on the bin with their racist policies! Workers unity against the dictatorship of the marketplace!