Rojava—US imperialism is the main enemy; critical support for the Kurdish anarchostalinists 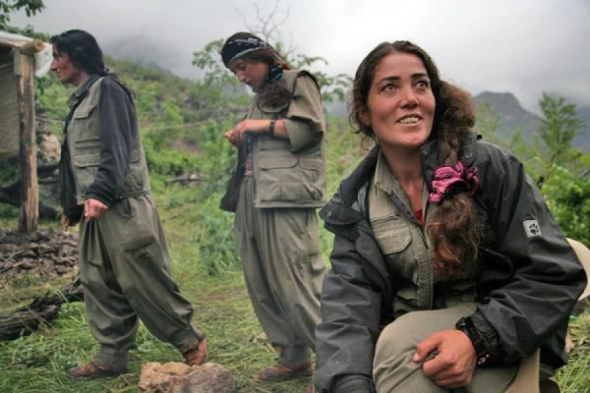 The whole world is talking about us Kurdish women

The Kurdish PYD/YPG (the political wing, the Democratic Union Party, PYD, the military, the People’s Protection Units, YPG) in Rojova, the Syrian Kurdish enclave, is allied with the US and others in this war. However they ‘forget’ that the US supports Turkey bombing them and the PKK (Turkish Kurds military wing) and agrees with Turkish President Erdogan that they cannot cross the Euphrates to cut Isis supply routes at Jarabulus.

The US were granted the full use of the Incirlik Air Base in reward. Turkey is a strategic ally of the US, the YPG is merely a temporary and opportunist ally, to be abandoned as soon as it is expedient.

This statement by the PYD is apparently enormously politically naive:

“By doing this (bombing the PKK/YPG) Turkey has not only encouraged the (Isis) gangs to resist, but also intended to make NATO and Russia confront each other through a provocation, hinder a joint action by the U.S. and Russia for the building of a new Syria, and relieve Isis.”

We should not forget that the PYD, like its mother organization the PKK in Turkey, lacks democratic processes in its internal functioning and in relation to other organizations considered to be rivals, or who are merely critical of it. We still support to the Kurdish right to self-determination and we demand the PKK is removed from lists of terrorist organizations.

Clearly a very exciting revolutionary thing is happening at the base here in Kobanî and the surrounding area of Rojava. This method of self-administration respects the rights of women, and religious and ethnic minorities in the areas they control.

But there are very credible reports of horrendous massacres and ethnic cleansing by YPG militias when they take villages that they suspect of supporting Isis. So this freedom has very definite territorial and political limits; the tops ultimately decide everything.

The PYD/YPG have thwarted the plans of US/Israeli imperialism directly to control Rojova by infiltrating the region with the forces of the Iraqi Kurdish puppet leader Masoud Barzani. But, in the Stalinist tradition, they also suppress the left, they allow no leftist opponents to operate within ‘their’ territory and prevent them from participating in the ruling institutions. Without a global strategy, without identifying the main enemy of all humanity, US dominated finance capital, it cannot advance either regionally or internationally.

Still in the midst of all the anti imperialist united fronts we must defend and develop the programme for human liberation. And in Kobanî that is surely there in embryo and developing. What serious socialist would not be inspired by the women there and understand that something very important was happening for the world revolution? But the base cannot triumph without capturing and overthrowing the superstructure, regionally and globally.

So is the PKK/YPG creed Stalinist or Anarchist? PKK leader Abdullah Öcalan imbibed the teachings of sociologist Murray Bookchin (ex-Stalinist, ex-Trotskyist, ex-Anarchist) in his Turkish jail and became an anarchostalinist, a bizarre urban Maoist-type dogma. [1]

Tactically we support Assad and Putin against the USA and its proxies but critically; they are bourgeois and not socialist. Like-wise critical support for Kurdish anarchostalinists.

[1] Anarchostalinist, an evolution of Anarchism and Stalinism. Anarchostalinists reject the dogmatism, inertia, y and gesturism of anarchism, and merge their anti-authoritarian and anti-statist views with a hard-line on anti-social criminals, drug pushers and the landowners. Could be seen as a 21st century urban Maoism. Rejects the automatic anti-Sovietism of liberal anarchists. Likes show-trials, tanks and rocket parades.

“Politicians? Shoot the bloody lot of them. It’d be better if Uncle Joe was still around…”,

“Better than being an effete bean” (an ineffective intellectual poseur).

Campaign against purge of Corbyn supporters starts to win victories – let’s step it up! »
« Interview with Radio Zamaneh: On the Syrian Democratic and Revolutionary Opposition

4 thoughts on “Rojava—US imperialism is the main enemy; critical support for the Kurdish anarchostalinists”